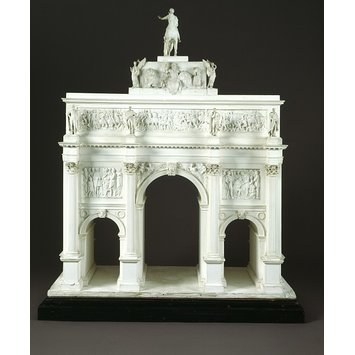 Object Type
This is the model for the Marble Arch, today at the top of London's Park Lane, but originally located outside Buckingham Palace. It is uncertain who made the model, although it is to the design of the architect John Nash (1752-1835). The chief sculptors employed to produce reliefs for the arch were E. H. Baily (1788-1867) and Sir Richard Westmacott (1799-1857). The arch was erected as a celebration of Wellington's and Nelson's victories respectively. The foundations of the Arch were laid in 1828, but it was not completed until about 1833. The bronze equestrian figure of George IV surmounting the arch, executed by Sir Francis Chantrey (1781-1841), was removed when the Arch was taken to its present position, and re-erected in Trafalgar Square.

People
John Nash was probably born in London, and was first employed in the office of the architect and sculptor Sir Robert Taylor, but he left his employ, and relatively early in life, in 1777, he set up independently as an architect and speculative builder in London. However in 1783 he was declared bankrupt, and moved to Carmarthen in Wales. Here he had some successful commissions, and returned to London in 1796. He formed a partnership with the landscape gardener Humphry Repton (1752-1818), and together they transformed country houses and their parks into elegant picturesque seats. In 1806 he was made architect to the Department of Woods and Forests, and in this capacity became responsible for designing Regent's Park, London, for the Prince Regent in 1811. He designed Regent Street in 1813. When George IV died in 1830, Nash's career as a public architect was virtually at an end.

Models
Small-scale models for monuments and buildings were made in order to help the architect or sculptor plan the work, as well as to show the patron the likely look of the finished commission.

Cast plaster, perhaps after an original model in wood and clay. The monument is composed of a main, centre arch, flanked by to lesser arches. Between the arches are four free standing Corinthian columns and above is an attic storey decorated with reliefs and surmounted by an equestrian figure of George IV. The figure is raised on a plinth on the front of which is a rlief of Britannia, seated between a lion and a unicorn, holding a shield with a portrait of Nelson; at the corner standing winged Victories. On the front (facing the King). In the spandrils above the main arch are two flying Victories with wreaths. Above the arches to the right and left are square panel reliefs illustrating episodes from the lives of Nelson and Wellington respectively. The attic on this face shows a continuous relief of the Battle of Waterloo before which on the projections above the columns, stand four figures of eminent men. The back of the arch also with columns, shows similar figures in the spandrils above the main arch and similar though simpler relief over the side openings. The attic on this face shows three panels of reliefs with scenes of naval battles; beofre which on the projections above the columns were similar figures to those on the front. The plinth of the statue of George IV shows on this side two Victories seated on crouching horses holding a wreath enclosing a bust of Wellington. The sides of the arch are decorated with inscriptions beneath three laurel wreaths, that to the left being inscribed 'Trafalgar' and below recording Naval Victories and Commanders. The attic relief above this side shows a seated Vicoty discoursing to a group of persons, her amr resting on a shield inscribed with Nelson's Victories CAMPERDOWN, NILE, TRAFALGAR. The right side is similar but incribed WATERLOO with below a list of military victories and Generals. The attic in this case shows a similar relief of a seated Victory, the shile being inscribed with Wellington's achievements, BADAJOS, SALAMANCA, PYRENES, ORTHES, WATERLOO.

British Galleries:
The model shows John Nash's design for the Marble Arch, London, which he based on the Arch of Constantine in Rome. It was part of a Classical re-building of Buckingham Palace for King George IV and originally stood in front of the palace. In 1851 it was moved to its present position at the north end of Park Lane. [27/03/2003] 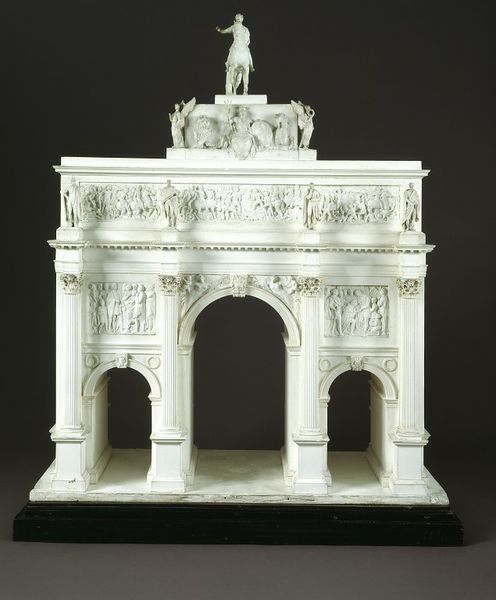