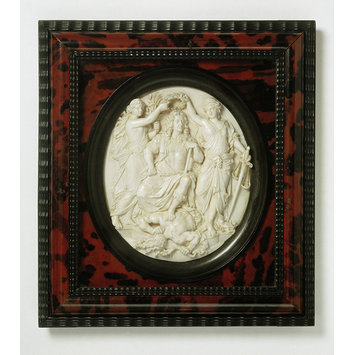 Object Type
The exact purpose of this allegorical ivory carving is unknown, although it may have been designed to commemorate the suppression by James II of the Monmouth Rebellion in 1685. It is signed by Jacobus Constantin, an artist who is otherwise unrecorded. He is likely to have been a Continental artist, perhaps from The Netherlands, working for the Stuart court.

Subjects Depicted
The King is seated on his throne, holding his sceptre and crushing with his left foot a representation of Discord, shown as a half-naked man with a serpent. Two classically dressed female figures, Peace and Justice, flank the King and jointly crown him with a laurel wreath of victory. Justice holds a sword and scales, while Peace holds an olive branch.

Materials & Making
Ivory was a precious and relatively expensive commodity, used at this date for portraits, and for allegorical images. It was particularly favoured by Netherlandish and German sculptors, who also used it to carve religious scenes. Ivory tusks were probably imported from Africa, where they were often bought at the same time as slaves, who were shipped to the sugar plantations in the West Indies. Ivory could be carved relatively easily, although occasionally faults led to breaks during the carving process. Because of the size and shape of the tusks large ivories are rare, many being even smaller than this piece.

Oval relief in ivory. Signed on the back. The King is shown in full length, seated on a throne with his left foot on the back of Discord, a naked man lying prone on his face grasping a serpent. The King rests his left hand on a baton, and looks towards his left. A female figure symbolic of Justice, to his left, holding a sword and scales in her left hand, and crowning the King with a laurel wreath. To his right is Peace, standing and holding an olive branch, and also holding the laurel wreath together with Justice about to crown the King.

British Galleries:
King James II is shown enthroned, and dressed in classical armour. He is being crowned by two figures representing Peace (with an olive branch) and Justice (with a sword and scales), while Discord (with a snake) lies defeated underfoot. The design may symbolise the monarch crushing the rebellion in 1685 led by James, Duke of Monmouth (1649-1685). [27/03/2003] 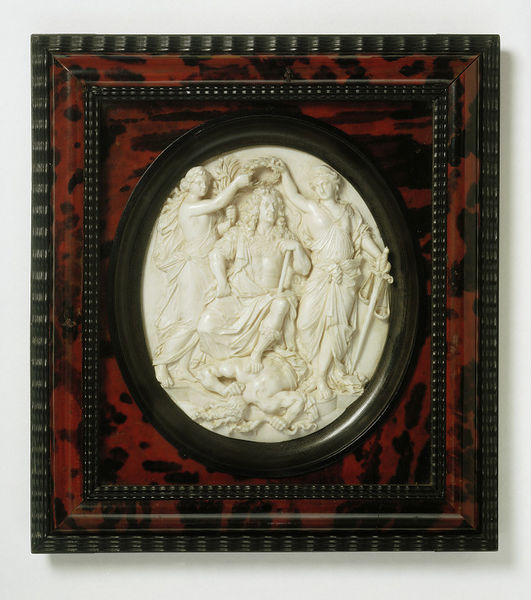