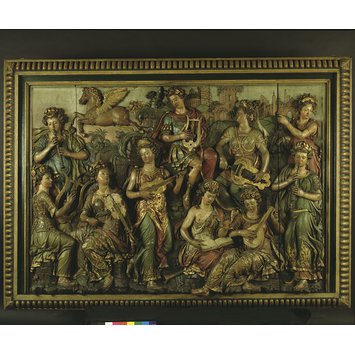 Apollo and the Nine Muses

Object Type
The subject, Apollo and the Nine Muses, represents the Arts in general. It would have been thought suitable for an important chamber of a grand house. Panels such as these served as overmantels and, together with the chimney-piece, were the most prominent part of the room.

Time
Apollo and the Nine Muses was a popular theme in European art from the 1530s onwards. This carving is characteristic of English work of the 1580s and similar to the alabaster overmantel of Apollo in the Nine Muses in the library of Hardwick Hall, Derbyshire. The rocky landscape and ruins in the background are similar to prints based on engravings such as Hieronymus Cock's Praecipua aliquot romanae Antiquitatis ruinarum monumenta ('Some outstanding monuments of Ancient Roman ruins'). Cock's work was published in Antwerp, Flanders (now Belgium), in 1551and soon became widely available in England.

Subjects Depicted
Music played an important part of life in the grand house. Musicians were often of the payroll of the owner and they provided music for banquets, dances and chapel services. Proficiency on the lute or spinet was considered the mark of a lady or gentleman. Here, Apollo plays the lyre while the nine muses play the following instruments (from left to right): lyre, recorder, viola da braccio, viola da mano, hurdy-gurdy, lute, triangle and oboe (added later, as oboes were not invented until 1650).

Place
The panel formed part of the Temple of the Muses at the Grange, Hockliffe, Bedfordshire. It is said to have come from the Manor House, Toddington, Bedfordshire, which was built in the 1570s and demolished in 1745.

Panel carved in high relief, depicting Apollo seated with his lyre, surrounded by the Nine Muses playing on musical instruments (viol, gittern, triangle, lyre-guitar, flageolet (2), theorbo and hurdy-gurdy); in the background is Pegaus flying and a ruined townscape; painted chiefly in blue, green, red with gilded scrolls on the garments. In a deep frame with gadrooning and corner leaf ornaments, with inner slip frame on three sides.

Construction
The panel is made up of 7 vertical boards of varying widths 17-28 which are glued together. The panel is also laminated for depth: two obvious layers can be detected. The back is reinforced with metal struts which are screwed into the back of the panel and of the frame. Additional oak boards are also screwed into the back of the frame. The two wind instruments are turned from hardwood other than oak, possibly box or pear. The peg box of the violin and the pegs are also made from a different type of hardwood. Several of the arms, hands and ﬁngers are a later restorations and are carved from softwood.

Polychromy
The existing polychrome layer is clearly not original as an earlier layer can be seen in damaged areas. It is likely that several feet have not been overpainted. In 2000 one dispersed sample of the ﬁrst polychrome layer (taken from the sky above the head of the standing Muse on the extreme left) was examined under polarised light. It shows lead white, azurite, gypsum and a very small amount of vermilion.

Modifications
Replaced in 2000: two missing fingers (visible in an earlier photograph) of the proper left hand of the standing Muse on the extreme left.

Anthony Wells-Cole (1997, see References) suggests that Adrian Gaunt, a joiner who worked at Longleat from 1563 to the late 1570s could have been the author of this panel, as well as the Chatsworth Apollo overmantel in alabaster.

In this representation Apollo plays the lyre while the nine muses play the following instruments (from left to right): lyre, recorder (modelled after a baroque instrument and must therefore replace a lost original), viola da braccio, guitar (an opulent representation of an instrument that became fashionable in England in the 1540s and 1550s, although very few depictions survive in English sources), hurdy-gurdy, lute, triangle and oboe (added later, as oboes were not invented until 1650). The two lyres are fake 'antique' lyres that correspond to no instrument actually in use at the time. In musical terms the carving depicts an assembly of instruments rather than those used authentically by a Tudor musical consort. The level of accuracy in the depictions of contemporary musical instruments is fairly high. For example, the guitar is shown with one gut string represented in the bass with the rope-like texture it would have possessed (see Christopher Page, below)

Discussion of the subjects depicted
Pegasus: The 6th century mythographer Fulgentius made Pegasus a symbol of Fame since both are winged, and hence he is seen among the Muses, sometimes on Mount Parnassus. (Hall's Dictionary of Subjects and Symbols in Art, rev. ed. 1979)

The Nine Muses (information taken from James Hall, Dictionary of Subjects and Symbols in Art (London 1974)

The goddesses of creative inspiration in poetry, song and other arts; the companions of Apollo. They were the daughters of Jupiter and the Titaness Mnemosyne (Memory) who had lain together for nine consecutive nights. The Muses were originally nymphs who presided over springs that had the power to give inspiration, especially Aganippe and Hippocrene on Mount Helicon and the Castalian spring on Mount Parnassus. The latter eventually became their accepted abode. Thus fountains and streams often feature in pictures of the Muses. In time their number was established as nine and each acquired her sphere of influence over learning and the arts. Their attributes, particularly their musical instruments, are liable to change at different periods, making identification difficult; in the 17th and 18th cents. some may be without attributes. The most constant are the globe and compasses of Urania and Euterpe's flute. From the 17th cent. the attributes given in Ripa's Iconologia were generally followed.

Apollo and the Nine Muses

A considerably more lavish depiction appears on a carved panel now in the Victoria and Albert Museum in London, which shows Apollo and the Muses with musical instruments (Figure 8). Taken together with its frame, which is possibly of later date, this substantial piece measures 121 cm in height and 178 cm in breadth. In 1754, or thereabouts, the work was carted to Hockcliffe Grange in Bedfordshire as Wentworth, Earl of Strafford, dispersed some of the furnishings from the decayed Elizabethan manor house at Toddington, not far away. In all probability, therefore, Toddington was its original home. This was the seat of the Cheyney family in the later Elizabethan period, and if the date of c.1580 commonly assigned to the overmantel is correct then it for Sir Henry Cheyney or for his widow Jane, to whom the property passed upon his death in 1587. [note 25] It would certainly have formed a luxuriant addition to a magnificent house, of forty-five hearths, where the was received on two occasions. [note 26]

Specifications
The instrument has six strings, evidently intended to represent gut since the rope-like surface, arising from the twisting process, is shown in an exaggerated form on part of the highest course near the plucking hand, and perhaps on part of the lowest.
The circular sound-hole, centrally placed, is filled with a foliate design, parts of which are visible with gilding.
The depth of the body is greatest in the middle and tapers down to the neck, as to the foot, where the absence of a heel suggests (but does not necessarily indicate) construction from an excavated block in the manner of the medieval gittern.
There are no frets on the surface of the flush fingerboard, nor is there any trace of them looping around the surprisingly extended neck as may be seen on the lute depicted on this same overmantel.
The string fastening is 'concealed' by the player's right hand.
The back of the instrument could not be viewed.

The theme of Apollo and the Muses holding an array of musical instruments, with the Muses posed as a group around the god, has a long history in Tudor art beginning with a design for a pageant in the coronation procession of Ann Boleyn in May 1533, commonly attributed to Holbein. The chief but not the only source of the tradition, on a European scale, is Raphael's Parnassus in the Vatican, widely known beyond Rome from Marcantonio Raimondi's print c. 1514-20. [note 27] Later versions known in England include an alabaster panel, of exquisite quality, marked with the royal arms and the initials ER, now at Hardwick Hall and probably dating from the 1570s.[note 28] The Toddington overmantel may be of the same period. Both pieces are assuredly the work of foreign craftsmen resident in England since they far exceed what is known of native ability just as they depart from all but the most educated contemporary English taste. In contrast to the carved screen at Burton Agnes (c. 1600-10), or the hall screen at Speke (c. 1560), where somewhat flattened figures face outwards 'in an ordering governed by iconographic rather than visual relationships and rationalized by the principle of symmetry rather than of linear perspective', [note 29] the modelling of Apollo and his entourage here shows a relatively advanced knowledge of anatomy. The sense of bodily mass and balance in each figure is captured with an assured technique and the illusion of antique garments that ruck and fold is expertly managed.

Notes
25 I am most grateful to Mr Philip Mead of Toddington for showing me a facsimile of a memoir of the late Major Cooper Cooper from The Bedfordshire Advertiser for Friday, 21 January 1898. This documents (1) the demolition of most of Toddington Manor in the first decades of the eighteenth century; (2) the sale of furnishings, induding the overmantel, by the owner of the site, Earl Strafford, in 1745; (3) the purchase of the overmantel by an ancestor of Sir Richard Gilpin of Hockliffe Grange; (4) the movement of the panel to Hockliffe Grange where it was placed in an adjacent building called 'The Temple of the Muses'; and (5) the purchase of the piece, after Gilpin’s death, by Major Cooper Cooper of Toddington in 1882. The article also refers to a brochure ‘On the wood-carving of Toddington Manor', by Major Cooper Cooper, addressed to ‘my very old friend, Sir Richard T. Gilpin ...'. Mr Mead informs me that the publisher was H.G. Fisher of Woburn, and that the brochure appeared in 1885 (private communication, 21 April 2014). No other trace of the brochure has so far been found.
26 See the remarkable digital reconstruction of the Tudor house by Alan Higgs, http://slimshader.co.uk/cheney's%20palace.pdf.
27 Reproduced in Thompson, ‘Poets, Lovers, and Heroes’, 16.
28 Wells-Cole, Art and Decoration, 253-4, and Figs. 426 and 427.
29 Evett, ‘Some Elizabethan Allegorical Paintings’, 156.

APOLLO AND THE MUSES
English; late sixteenth century
Oak panel painted and gilded.
The style of this carving is French of the mid 16th century although it was probably executed in this country towards the end of that century.
Apollo is seated with his lyre surrounded by the Nine Muses playing on musical instruments (viol, gittern, triangle, lyre-guitar, flageolet (2), theorbo and hurdy-gurdy); in the background is Pegasus. In a carved wood frame; painted chiefly in blue, green and red with gilded scrolls on the garments.
Said to have come from the Manor House, Toddington, Bedfordshire, pulled down about 1745; later built into a room called "The Temple of the Muses" at The Grange, Hockliffe. The panel shows a close relationship to the alabaster relief at Hardwick Hall (in the Library) of the same subject, which dates from the same period.
Museum No. A.12-1924
[Gallery 40a Musical Instruments]
[4/8/2000]
British Galleries:
This carved and painted oak panel shows the nine Muses, goddesses of the arts, with the Greek god Apollo playing his lyre. Their instruments include the recorder, hurdy-gurdy and lute, all of which were played in Elizabethan times. Courtiers enjoyed such mythological decoration, which reflected their education and understanding of the symbolism. [27/03/2003] 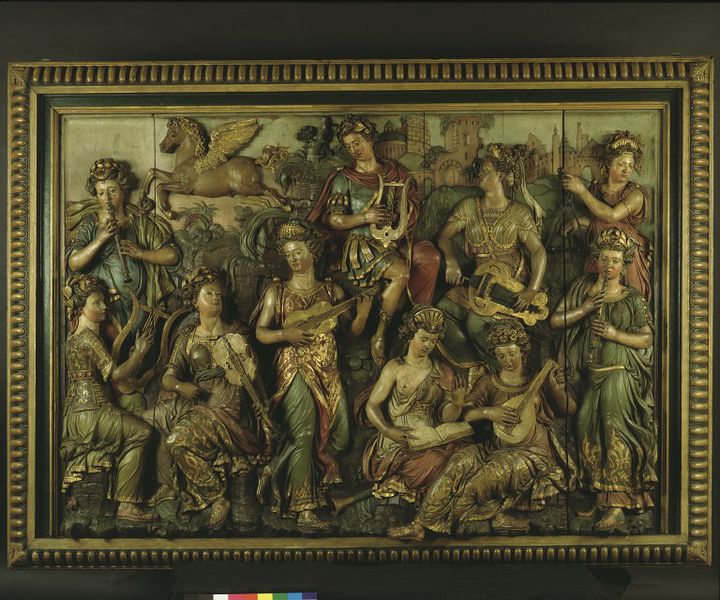