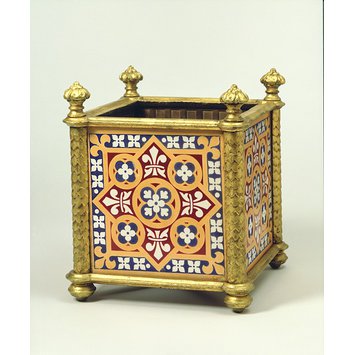 Object Type
This plant pot and another in the V&A's collection (museum no. 925-1852), composed of large tiles set in gilded iron frames, were of two of several displayed by A.W.N. Pugin in the Mediaeval Court, part of the Crystal Palace allotted to and designed by him. The plant pots differ from each other in design and size, but they were both prototypes with tiles cut to fit the frames, specially created for the Exhibition. Since they are now the only ones known, it is likely that few if any others were made.

People
Pugin probably met Herbert Minton in 1840. Minton was keen to manufacture Pugin's encaustic floor tiles. Pugin met John Hardman, who made the frames, in 1837. Hardman had been a button manufacturer in Birmingham, but Pugin steered his firm towards making ironwork as well as stained-glass windows to his designs. Pugin was on the Design Purchase Committee to buy objects from the Great Exhibition for the School of Design. Naturally, he selected his pots as instructive examples of good domestic product design.

Materials & Making
Pugin was keen to combine good design with efficient modern manufacturing methods. The tiles were made by Prosser's Patent, an economical new method of compressing powdered clay to produce a good, even surface. The tiles were printed by a process resembling wood-block printing. Pugin was familiar with chromolithographic book illustration and encouraged two Clerkenwell printers, F.W.M. Collins and Alfred Reynolds, to experiment with tiles and tablewares. On 14th March 1848, they patented their method of transfer-printing with oil-based inks and stone or metal plates. Herbert Minton bought the patent in 1849. this system was far more efficient than hand-colouring but did not really catch on until the 1870s.

Stoke-on-Trent (tiles, made)
Birmingham (metalwork, made)

From Ornament Gallery text:
"A key figure is the Gothic Revival of the mid-nineteenth century, Pugin struggles to combine historical accuracy with a bold simplicity. This piece was shown in the Great Exhibition: the floriated decoration on the tiles includes fleurs-de-lis (stylised lilies) and quatrefoils (motifs like rosettes with four petals)."

Atterbuy, Paul. The Ceramic Designs of A.W.N. Pugin. English Ceramics Circle Transactions, Volume 23, 2012, pp163-174, illustrated fig. 10, 169p as an example of the 'New Press' method of colour printing ceramics developed by W. M. Collins and A. Reynolds. 'The Collins and Reynolds process took a while to become widely established, partly because it was expensive and partly because the ceramic industry was innately conservative but the great pioneers were Minton and Pugin, who saw at once the process's potential for colourful flat pattern printing onto tiles. The first use seems to have been for wall tiles in the Smoking Room at the Palace of Westminster, and for large tiles inset into metal-framed jardinières...'

British Galleries:
These plant stands were designed by A.W.N. Pugin for the Medieval Court, one of the most popular areas of the Exhibition. Pugin collaborated with Minton & Co. on the design and production of many tiles in the Gothic style. [27/03/2003]

Tiles made by Minton & Co., metalwork by John Hardman & Co. 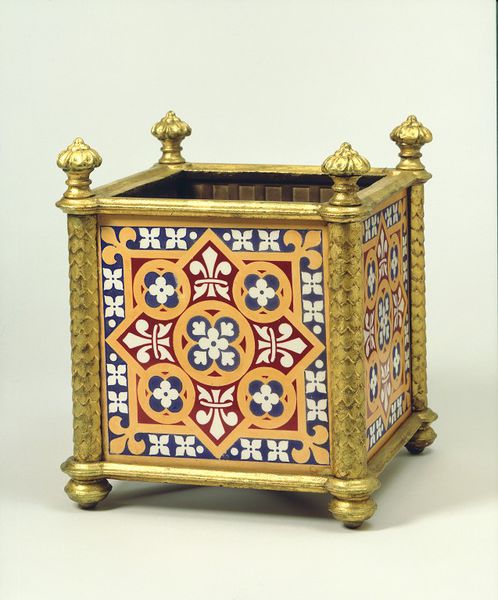