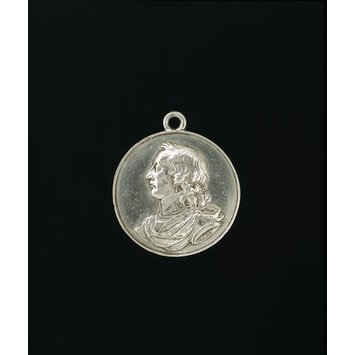 Object Type
Portrait medallions were produced in considerable numbers for both sides during the Civil War. They could be worn to show loyalty, and may also have been given as rewards.

People
This medal portrays Sir James Harrington (b.1609), a Member of Parliament for the county of Rutland. He commanded part of the Parliamentary army at the battle of Newbury in 1644, an event recorded on the reverse of the medal. He is portrayed on the obverse (front), long-haired and wearing armour, in profile facing left. The reverse is inscribed with his offices and the date of the battle.

Abraham Simon (1617-1692) and his brother Thomas (1618-1665) were the most distinguished native-born medallists working in 17th-century England. They were also responsible for coinage minted under the Commonwealth. In this medal, the portrait was modelled in wax by Abraham and then cast in silver by Thomas. Although admired by Thomas Cromwell, who described him as 'ingenious and worthy of incouragement', Thomas Simon later worked for Charles II at the Royal Mint.

Materials & Making
The medal was either 'struck' or cast. Struck medals were produced from metal dies engraved with the design in reverse. A flat disc was placed between the dies, which were then compressed, so that the design was reproduced on the metal. This technique meant that a high number of medals could be made using the same dies over and over, whereas the technique of casting medals was generally more complex and therefore usually suitable only for smaller numbers.

The two brothers, Abraham Simon (b London, 1617; d ?1692) and Thomas Simon (b London, 1618; d London, 1665), were among the most outstanding medallists of English birth before the 19th century. Abraham worked for Queen Christina of Sweden and in Holland before returning to England ca. 1643. He was a skillful wax-modeller, as revealed by his self-portrait in that medium (London, BM).
In 1645 he was appointed jointly with his brother Engraver of Coins and Seals at the Royal Mint. From around this time they produced many cast and chased portrait medals of distinguished contemporaries. According to Vertue (1780), the medals were cast from Abraham's wax portraits; they were then chased and often signed by Thomas. However, the possibility that Abraham's role also included casting and chasing is suggested by the appearance of his initials on some of the medals. Moreover, as Thomas was an ardent Parliamentarian, it is unlikely that he was involved in the production of those medals that portray noted Royalists.
Many of the medals thought to be collaborative efforts are of a particular size; they have no legend accompanying the portrait on the obverse, and a reverse consisting solely of a horizontally placed inscription. The earliest of these are either unsigned or signed by Abraham. Signed examples include the medals of John Campbell of Lawers, 1st Earl of Loudoun and William Pope (both 1645) and those of Albert Joachim, Sir Sydenham Poyntz and John Maitland, 2nd Earl of Dunfermline and Charles Seton, 2nd Earl of Lauderdale (all 1646).
Abraham continued working throughout the period of the Commonwealth: he produced a medallic portrait of Henry Cromwell in 1654. After the Restoration, he modelled a wax portrait of Charles II, but his personality became increasingly difficult, and, failing to obtain commissions, he ended his days in obscurity.

British Galleries:
Sir James Harrington commanded a brigade of troops from Reading, Berkshire on behalf of Parliament. His troops played a key part in the second Battle of Newbury in October 1644, a turning point in the Civil War. This battle is commemorated on the reverse of the medal. [27/03/2003] 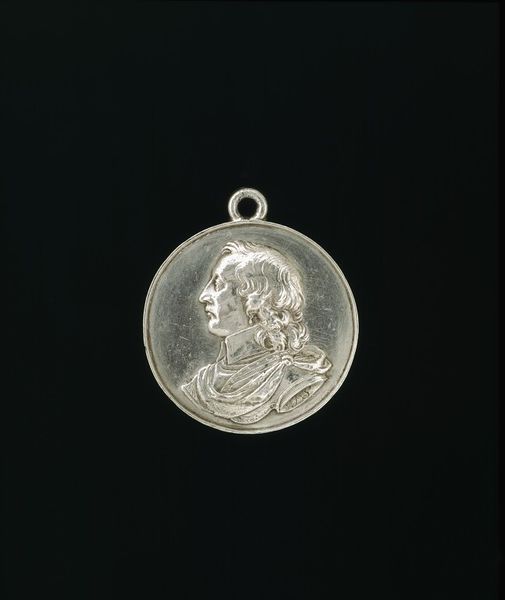