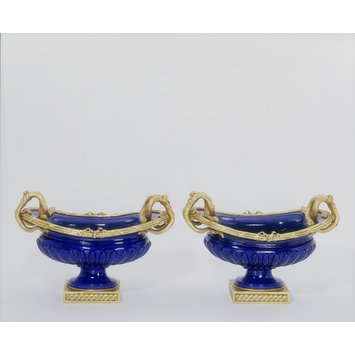 Object Type
Sévres, the porcelain factory on the outskirts of Paris, produced ornamental vases for mounting in ormolu (gilt bronze) between about 1761 and 1791. This vogue arose in imitation of much-admired Chinese mounted vases. The form of the vase was often influenced, as here, by hardstone prototypes and goldsmiths' work. The 'vase Choiseul', named after the duc de Choiseul, an art collector and important political figure, represents one of the earliest Neo-classical shapes produced by the factory.

Time
The end of the Seven Years' War in 1763 enabled collectors such as Walpole to renew their acquaintance with Paris. When Walpole saw these vases, he must have admired them for their modern yet classical form. A new interest in all things classical, inspired by recent archaeological discoveries, meant that the Neo-classical form of these vases was viewed as the height of fashion by collectors such as Walpole. This was one of the first vase shapes produced by Sévres to depart from the earlier rococo style.

Place
A 1781 watercolour (museum no. D.1837-1904, by Thomas and Paul Sandby and Edward Edwards) shows this vase and its pair (museum no. 743A-1882) between a pair of maiolica snake-handled vases on commodes in the Gallery at Strawberry Hill. Shortly afterwards, Walpole moved them to a table in the Round Drawing Room. Nearly a century later the collector, John Jones, displayed them on Boulle tripod tables by the dining-room windows of his house at 95 Piccadilly.

Oval shaped soft-paste porcelain vase with raised gadrooning, decorated all over in overglaze 'bleu nouveau'. The vase is mounted in chased gilt-bronze (ormolu) with guilloche decoration on the foot and a reeded rim and snake handles all bound with ribands.

The black and white variegated marble vase on which this porcelain version is thought to have been based is Getty collection no. 79.DJ.183. It appears to have the same gilt-bronze mounts as the Sèvres version with the addition of a line of gilt-bronze 'pearls' defining the top of the foot. These have been rendered in porcelain by the Sèvres factory.

British Galleries:
Walpole probably brought these vases (named after the duc de Choiseul) back from one of his trips to Paris between 1765 and 1769. The shape and colour were the height of fashion. Walpole displayed them at Strawberry Hill. [27/03/2003]

Vase made at the Sèvres Porcelain Manufactory, near Paris. Mounts made in Paris. 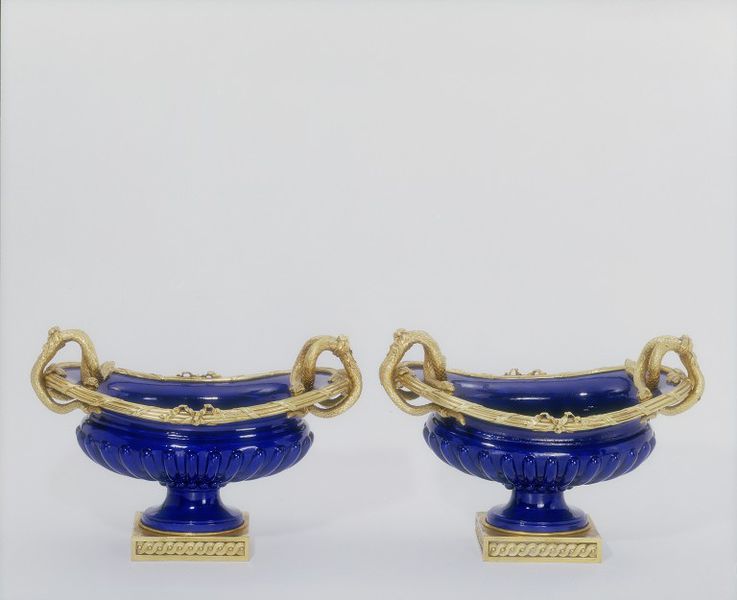