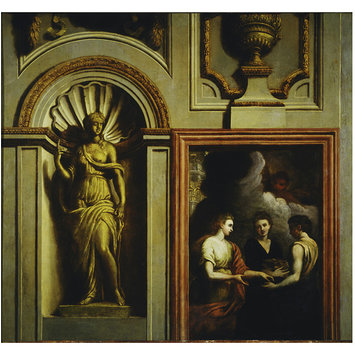 Architectural elements with Psyche Giving Gifts to Her Sisters

Louis Laguerre (1663-1721) was born in Paris and studied with the Jesuits before enrolling at the Académie Royale de Peinture et Sculpture. He worked with Charles Le Brun (1619-1690) before moving to England in 1683-84 and spent there the rest of his life. He specialised in decorative scheme in the Baroque manner, working for some time with Antonio Verrio (ca. 1639-1707), and achieved a great success as a decorator.

This fragment of a mural painting was detached from the staircase of a house in Leadenhall Street, London. It shows architectural elements in trompe-l’oeil with a painting illustrating a scene from the tale of Eros and Psyche. It is a good example of the decorative device in vogue during the late 17th century and the beginning of the 18th century in England. Laguerre is recorded to have supplied a number of this kind of decoration in private houses and palaces all over the UK between 1683-84 and 1721.

Painted in trompe-l'oeil: an antique gilt bronze statue in a niche, and part of an urn on top of a painting showing three female figures and a putto holding up a drapery.

Purchased, 1877
Painted in a house in Leadenhall Street, London, for an unknown patron

Historical significance: This work is a fragment of a wall painting originally in the staircase of a house in Leadenhall Street, London. Formerly given to Sir James Thornhill and assistants, it was re-attributed to Louis Laguerre and assistants by Croft-Murray (1962) on the ground of characteristic similarities with his work in the three female figures. Two other fragments originally accompanied 727-1877 and showed flying amorini and a red marble column with a gilt capital but they were apparently lost between 1992 and 2001.
The painting shows a decorative architecture in trompe-l'oeil including a niche in which is set a gilt-bronze statue of a woman in classical drapery, an urn on a pedestal and below, a painting with a scene from the tale of Eros and Psyche. This painting within a painting apparently derives with minor variations from a print made by The Master of the Die (1530-1560) after Michiel Coxcie (1499-1592) (See British Museum, London - L,67.11 and Bartsch XV.216.49).
The most famous version of this tale was narrated by the ancient Roman author Ovid and enjoyed a great success during the late Middle Ages and the Renaissance. The present scene refers to the beginning of the story when Psyche is offering her jealous sisters lavish presents she gained from her secret marriage with Eros, God of Love.
This wall painting was executed a secco, in oil on plaster, a technique that was apparently also used by Le Brun with whom Laguerre worked for some time before his departure to London. This technique as well as the fresco technique, which requires applying the paint in a wet support rather than dry, is particularly adapted to decorative purposes and the earliest examples can be found in the Roman decorative murals.
This fragment is therefore a good example of the 18th-century English taste for such decorative device. The technique of trompe-l'oeil also allows providing grand design to domestic interiors in a much cheaper way. Although Laguerre was known for his Baroque decorations, the present painting shows some characteristic features of the forthcoming Neo-classical aesthetic.

Mural paintings executed 'a fresco' or 'a secco' are among the most complex projects undertaken during the Renaissance. This technique, i.e. painting on wet (a fresco) or dry (a secco) plaster, originated in the Antiquity (see the surviving fresco of Pompeii, near Naples, destructed during the eruption of the Vesuvius in 79 B.C.), was reintroduced and developed in the late 13th century and the 14th century particularly in the work of the Isaac master, Giotto and his followers and perfected during the Italian Renaissance, culminating in Michelangelo's technological tour de force in the Sistine chapel, Rome (1508-12). This medium was used to decorate large wall areas of both private and public buildings. Such sizable paintings, in which timing was of critical importance, took careful planning and involved a number of assistants. A precise plan in the form of a drawing or of many drawings was required so that the composition would fit exactly on the wall. The artist could draw directly on the wet plaster (this underdrawing technique is called sinopia) or use cartoons (from the Italian word cartone) from which the composition was then transferred onto the wall. Another method of transfer, used especially in the 17th century for vast ceiling frescoes, was squaring, which replaced the time-consuming and costly cartoon technique. The taste for these decorative devices extended well into the 19th century.

Fragment of a mural painting, 'Architectural elements with Psyche Giving Gifts to her Sisters', Attributed to Louis Laguerre, 1683-1721

British Galleries:
By 1700 wall paintings were replacing tapestry as a cheaper yet more fashionable decoration for grand halls, staircases and ceilings. Leading artists like Louis Laguerre relied on assistants to paint many square metres of wall in large rooms. Patriotic and mythological subjects were popular and demonstrated the owner's learning, allegiance and sophisticated taste. This one shows Psyche, beloved of Eros, the god of love in Greek mythology. [27/03/2003] 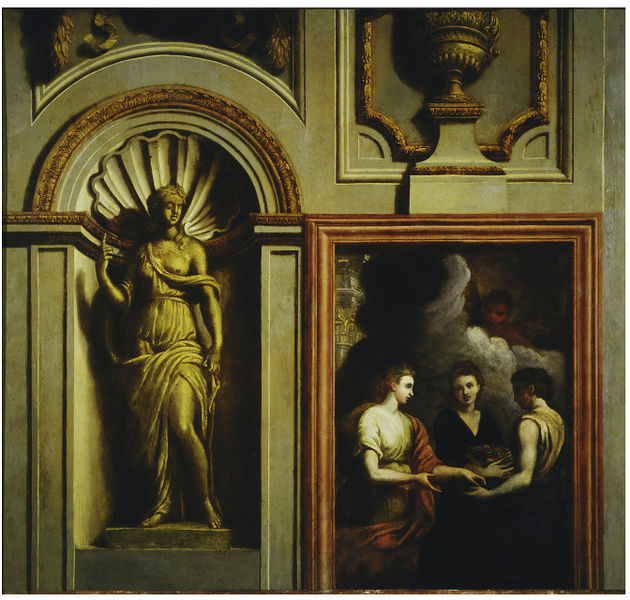