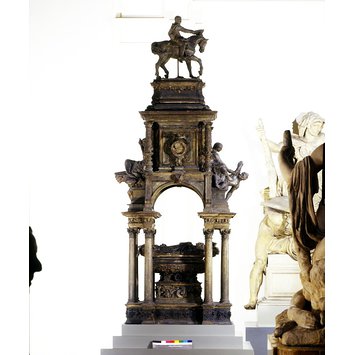 Model for the Wellington Monument in St Paul's Cathedral

Object Type
After the death of the 1st Duke of Wellington in 1852, the government announced that a competition was to be held for the design for a monument to commemorate him. This was Stevens's competitive sketch model, and was among those exhibited at Westminster Hall, London, in 1857. Although Stevens's model came fifth in the competition, which was won by William Calder Marshall (1813-1894), it was actually judged more suitable to the monument's setting, which was to be St Paul's Cathedral, and he was therefore awarded the commission. The monument, which was not unveiled until 1912, 37 years after the artist's death, was completed by his pupil Hugh Stannus (1840-1908). Stevens had made some changes to the design, and the finished monument therefore differs in some respects from this model, but the general composition remained. The model is made from plaster and wax, with metal armatures; in form it echoes Italian Renaissance monuments.

People
Arthur Wellesley, 1st Duke of Wellington, was widely held to be the greatest British military hero of the 19th century, most famous for his victory over Napoleon at Waterloo in 1815.

Alfred Stevens was one of the most important sculptors in Britain in the 19th century, and executed a wide variety of work, including designs for silver and maiolica, firedogs and chimney-pieces, as well as sculpture. He had trained in Italy, working first in Florence, and then under Bertel Thorvaldsen (1770-1844) in Rome. He held a great admiration for Michelangelo, but was also influenced by Florentine artists of the 15th century, such as Donatello. His vibrant style, which was both rooted in the traditions of the Italian Renaissance, and new and naturalistic, exercised a strong influence on British sculptors towards the end of the 19th century, such as George Frampton (1860-1928) and Alfred Gilbert (1854-1934).

Sketch-model, plaster and wax, for the monument to the 1st Duke of Wellington in St Paul's Cathedral, by Alfred Stevens, England, 1857

British Galleries:
Alfred Stevens' monument to the 1st Duke of Wellington in St Paul's cathedral is one of his most celebrated works. This is the plaster sketch made as an entry for the competition for the monument. Stevens drew on a number of sources, including Italian sculpture, to produce a massive and imposing memorial. The monument itself was not completed until 1912. [27/03/2003] 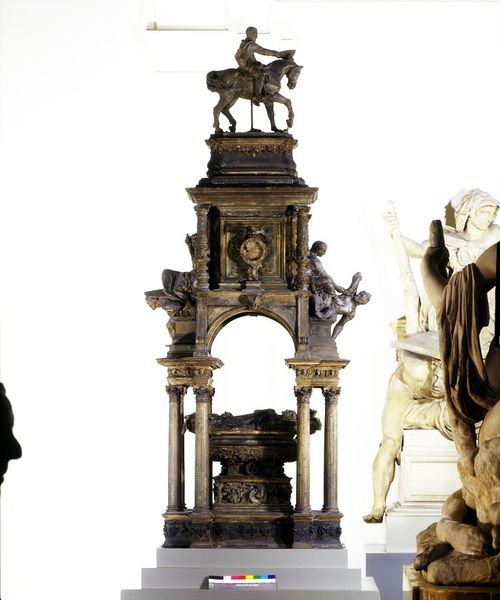