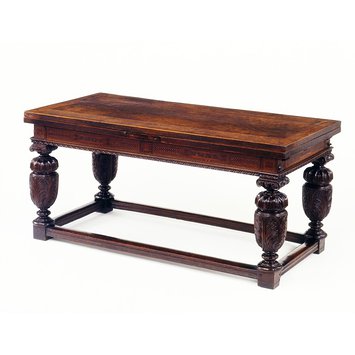 Object Type
A draw table is an extending table with the top divided into three leaves. Those at each end slide under the central leaf when the table is closed. To open the table, the end leaves are drawn out and the central leaf occupies the space in the middle, so forming a continuous surface. Draw tables were known in the early 17th century and were sometimes called drawing tables.

Design & Designing
The bulbous legs are of Flemish origin. They were introduced into England through immigrant craftsmen and continental pattern books by designers such as Wendel Dietterlin of Strasbourg (1550-1599) and Hans Vredeman de Vries of Antwerp (1527-?1606).

The inlay, chequer patterns and diagonal banding are characteristic of work by Dutch and Flemish refugee craftsmen in Southwark, London. The acanthus leaf carving and gadrooning on the vases are typical of draw tables made in England in the period from 1585 to 1630. (The gadrooning is the carved decoration with convex reeds on the edges of the 'apron' and stretchers.)

Historical Associations
The table came from Spains Hall, near Finchling, Essex, the seat of the Kempe family.

Draw-Table; the top rests on rails with panels of geometrical marquetry consisting of small-scale chequer boards and rhombuses separated by square ornaments, using sycamore, bog oak, and other woods. Below this is a narrow carved moulding with stylised egg and dart ornament. The four legs are of heavy baluster form, each composed of a modified Ionic capital, a bulbous body carved above with gadroons and below with acanthus and resting on a turned base, with a squared foot on which is simple punched decoration. They are connected below by four stretchers moulded (identically) on their inner and outer faces, and gently rounded on their upper face, where a moulded surface has been worn away. Both short leaves have been cut with shallow finger-pulls. A dark stain has been over all of the show surfaces.

For a diagram of the opening mechanism of this type of table, see John C. Rogers, English Furniture, revised and enlarged by Margaret Jourdain. (London, 1950), p.35

Construction
The table consists of two frames - an upper (the rails) and a lower (the stretchers) joined with pegged mortise and tenon joints to four full-height turned baluster legs. The table top is in three separate sections, of mitred ‘bread board’ construction with four boards arranged longitudily: a long mid-section, ‘floating’ but supported by a transverse mid-rail into which it is located with two glued tenons (presumably added, one missing 2013); two short draw-leaves, each supported on two long lopers (and fixed to them with modern screws). When one or both short leaves are withdrawn, the ends of the lopers cantilever below the transverse mid-rail and also support the long central top section at its normal height. The transverse mid-rail is supported on a full length longitudinal rail in two sections (apparently replacement), both ends of which sit in a deep notch cut in the side rails of the upper frame. On the lower edge of the rails, the applied moulding is nailed on (some sections replaced).

Modification
Four iron screw bolts added at the top of each leg, which pass through the square top into the long rails. At one end of the table, the capitals of both legs are missing sections on their inner corners. The wear on the rails seems remarkably consistent. The lopers possibly replacement. It seems possible that both shorter table-top panels are replacements or at least refinished. One, possibly both, ends of the transverse mid-rail has a modern facing batten nailed to its face.

Oak, carved and inlaid with sycamore, holly and bog-oak

23rd April 1898 letter
Clark (on behalf of Drummond) offers Mr Drummond's large oak drawing table of the time of Charles I "in a perfect state of preservation". On 2nd May 1898 he writes again on the merits of the table

5th May 1898, minute paper of Lehfeldt (attached)
reports on his inspection of the table. He describes it as English @ 1600.

7th May 1898, minute paper
describes the table as "Far above the average of English 16th C. work". Mr Seymour Lucas (well known expert on the period) recommends that the Museum secure it as such examples are very rare.

16th May 1898, purchase form
describes the condition of the oak drawing table as "chipped & scratched". It is purchased for £80.

For Spains Hall Essex, see James Bettley, 'The Contemporary in the conquest', in Country Life, April 30, 2014 p.92ff. From the early 15th century to 1760 it was owned by the Kempe family.

Victor Chinnery proposes a dating 1575-1625 for tables of this basic design with bulbous turned legs of this pattern noting that slimmer examples are not necessarily later than the heavier examples. Baluster legs appear to have remained fashionable well into the 1630s and beyond.
Victor Chinnery, Oak Furniture, The British Tradition (Woodbridge, 1979)

Adams-Acton claims that references to framed-up English tables (as opposed to those on trestles) appear in inventories from about 1550, and that early 'bulbs' [sic] from about 1600 are larger and more highly carved than later examples which evolved into the 'vase or pear form'. He suggests that the majority of surviving Elizabethan table tops are replacement or altered, and that some may have had stone or marble tops (like those illustrated in the Lumley inventory of 1590), possibly evidenced by loper slots being roughly cut, suggestive of 17th century adaptation.
He argues that Netherlandish draw-end tables were smaller and lighter than English examples
Murray Adams-Acton, Early English Oak tables, I - Observations on the Long Table, in Connoisseur, Dec 1936.

Draw-Table; the top rests on a framework inlaid on each side in sycamore, bog oak, and other woods with chequer pattern and other ornament in panels bordered with diagonal lines. Below this is a narrow carved band of conventional ornament. The four legs are of heavy baluster form, each composed of a modified Ionic capital, a bulbous body carved above with gadroons and below with acanthus and resting on a turned base. They are connected below by four moulded stretchers.

Benn, H.P. and H.P. Shapland, Nation’s Treasures, London : Simpkin, Marshall & Co.
& Benn Bros., 1910, p. 37, plate 11
“ This is an oak draw-table of the seventeenth century with carved bulbous legs. Students will note that the old turners refrained from using an immense block of wood for this bulbous effect, getting over the difficulty by building up the leg on four sides; the joints are clearly discernable in this example. The top of the table is very thick, and the method of framing is worth noting.
The carving, though crude, looked at from a modern standpoint, is effective on so bold a piece. The rails underneath the top are elaborately decorated with a black-and-white chequered pattern and diagonal stringing. This table was originally varnished, giving it its rich nut-brown colour. The black-and-white stringing is toned down, the white having assumed a rich yellow, so that the band does not appear too striking, as it might have done when the table was first made”.
Macquoid, Percy. A History of English Furniture ‘The Age of Oak’ (London: Medici
Society, 1923), fig. 108,
Percy Macquoid, The Age of Oak, pp 128, 130
“ This table is of extremely neat workmanship and compact proportions; the frame is inlaid with a checker of marqueterie, but the shallow carving of the acanthus on the somewhat clumsy bulbous legs shows signs of the commencement of a decadence in the carved oak of this period”.
Roe, Fred. A History of Oak Furniture. London, 1920. Plate XLVIII
“Elizabethan Draw Table: A very beautiful specimen in fine condition, richly inlaid with holly and bog-oak on its stretchers. Victoria and Albert Museum”.
Marx, P.E. and M.S. Taylor. Measured Drawings of English Furniture. London, 1931, pp.62-5, pl. 13
Mercer, Eric. The Social History of Decorative Arts (700-1700). London, 1969, pl. 116
Sordelli, Angela Comolli. Il Mobile Antico dal XIV al XVII Secolo, Milan, 1967, p. 136
Windisch-Graetz, Franz. Möbel Europa, vol. 2 Renaissance-Manierismus, fig. 259, p. 336. Munich, 1982.

British Galleries:
Refugee craftsmen from Flanders (now Belgium) supplied both the design sources and the skills needed to create the inlaid decoration on this table. The draw leaves allow the table to double its length. Bulbous, turned legs covered with stylised leaves were also found on the supports for the upper tier of cupboards and on bedposts. [27/03/2003] 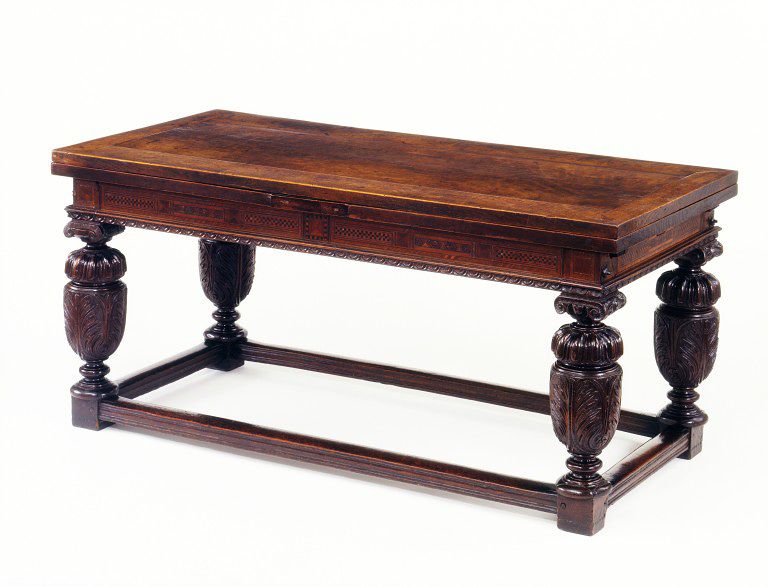