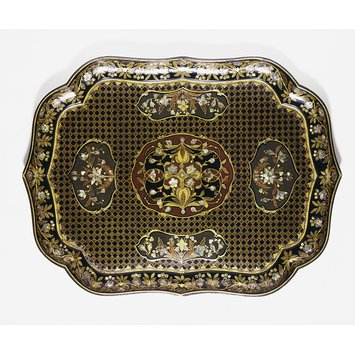 Object Type
In the 19th century large numbers of trays were produced with fashionable designs, such as the Islamic style decoration on this example. It illustrates the skill of artists and craftsmen in interpreting fashionable styles for a domestic object. The decoration is carefully designed to allow some of the detail to be visible even when the tray is in use.

People
Jennens & Bettridge, the firm run by Theodore Hyla Jennens and John Bettridge between 1816 and 1864, was famous for the range of papier-mâché goods manufactured in its factory at 99 Constitution Hill, Birmingham, West Midlands. They also had premises at 6 Halkin Street West, Belgrave Square, London. The firm produced a range of products including writing boxes, trays, fans, and larger pieces of furniture such as chairs, tables and sofas. The bottom of this tray is stamped with the firm's name.

Materials & Making
Papier-mâché was made by pasting layers of paper over moulds of the required shape, a job mainly done by women and girls. The object was then oiled and baked at very high temperatures. The shape of this tray would have been finished by a cabinet-maker before it was varnished and dried in a stove. The mother-of-pearl was applied before the painted decoration, which was followed by a final coat of varnish, further stove drying, and polishing.

A large tray of papier-mâché, with shaped sides, of the pattern known by the makers as 'king-gothic', japanned on a black ground with Persian style ornament, the edges showing scrolling plants and flowers, the ground covered overll with a gilded trellis pattern set with five shaped reserves with more elaborate floral and scrolling decoration. The decoration is highlighted in places with inlays of mother-of-pearl.

Papier-mâché, japanned and gilded, with appliqué of mother-of-pearl

Stamped Jennens & Bettridge below a crown on the back

British Galleries:
These pointed shapes and stylised flowers were based on Islamic designs, including carpets. This tray is typical of the skill of artists and craftsmen employed by the prominent papier-mâché manufacturers, Jennens & Bettridge, who produced a wide range of goods in fashionable styles. [27/03/2003] 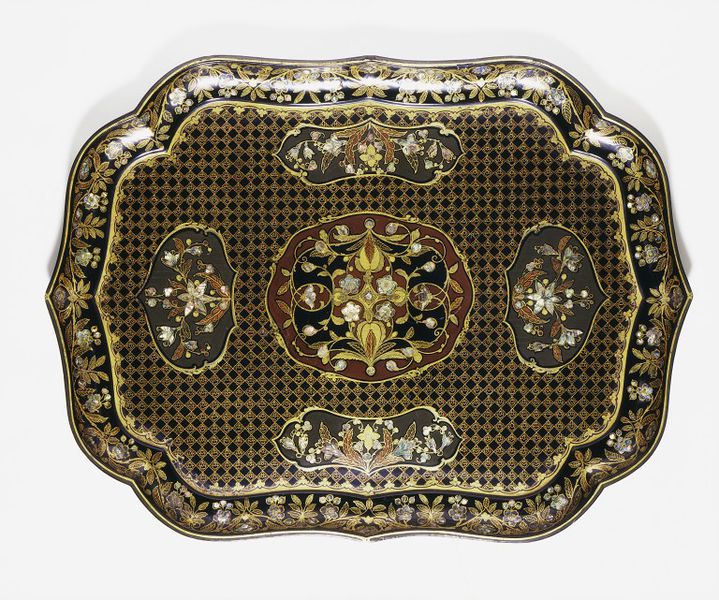