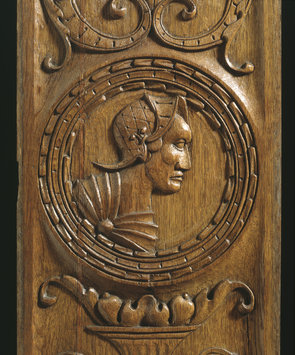 Object Type
This is part of a set of carved oak panelling that originally covered the walls of a room in the Abbey House, Waltham Abbey, Essex.

Place
Abbey House was acquired by Sir Anthony Denny (1501-1549), after the Dissolution of the Monasteries in the 1530s, and finally demolished in 1770. The carvings were placed in a town house in Waltham Abbey, before being acquired by the V&A in 1899.

Time
This frame is a very early example of 'Antique' or 'Romayne' (Roman) decoration, which derived from Italy and became widespread in England from about 1520.

Historical Association
Other panels from this room contain the portcullis and Tudor rose of Henry VIII (reigned 1509-1547) and the pomegranate, the emblem of Katherine of Aragon, whom he divorced in 1529. These emblems were potent symbols of Pre-Reformation England. They suggest that the panelling was installed before Sir Anthony Denny bought the house, since he was a loyal supporter of the King during the last years of his reign.

Four large sections of panelling are on loan to Epping Forest District Museum; a single panel is on display in the British Galleries (gallery 57).

Panelling of oak, composed of 110 panels within a moulded framework, of two basic types. Type A: 100 of the panels (of narrow width) are arranged in three rows, and are carved with profile busts (male and female) within circular medallions, Gothic arches, heraldic devices, and other renaissance ornament; the Tudor rose and portcullis, and the pomegranate of Katharine of Aragon are repeated several times as well as the arms of Blackett (ar. a chevron sa. Between three mullets az.) and other charges not identified.

Type B: The remaining ten panels are wider and unlike the rest in design, with vases, arabesques and scrolls or profile heads within circular wreaths. They are carved in an accomplished Italian or Franco-Italian style. It has been suggested that two distinct hands can be recognised.

Bought for £375 from Thomas G. Nevill, 15 Canonbury Park, London; purchased 'in situ' froma house in the Green Yard, Waltham Abbey. RFs 33293/1899.
Condition on acquisition: "The panelling has been restored. The carved wood mouldings round the fireplace are of the 18th century. Two of the original panels have been withdrawn, their place being taken by modern copies of two of the other panels."

This panelling probably formed part of the decoration of the abbey-house at Waltham Abbey, which was granted at the dissolution of the monasteries by Henry VIII., on lease to Sir Anthony Denny. In the early part of the 17th century Edward Denny, grandson of Sir Anthony, Baron of Waltham and Earl of Norwich, is supposed to have used this panelling in his new house erected in the abbey grounds. This mansion was pulled down in 1770, and the carvings now in the Museum were placed in a house in the town.

Probably made for Robert Fuller (d. 1540), abbot of the Augustinian Abbey at Waltham, between 1526 and 1540, the year he surrendered the property to the King's Commissioners, following the dissolution of the monasteries in 1535. It is unlikely to have been made for Denny, who was not ennobled, (the family only gained their title in 17th century).

Carved panel in the Renaissance style. Probably made for Robert Fuller (died in 1540), prior at Waltham Abbey, Essex, 1500-1530

Benn, H.P and Shapland, H.P., The Nation's Treasures. Measured Drawings of Fine Old Furniture in the Victoria and Albert Museum. London: Simpkin, Marshall, Hamilton, Kent & co. Ld and Benn Brothers Ltd., 1910, p. 14, pl. 13.
'Waltham Abbey Panelled Room, Essex', Transactions for the Essex Society for Archaeology and History, 4th ser., vol. 7 (2016).
Eleanor Rowe, Practical Wood-Carving; part 1 Elementary (London, 1907), p 30-33. Ill.
'The panelling on the opposite page, though crudely carved, is full of suggestive detail. The rails are plain, except where the lower edge of the panel abuts against the surface of the rail, and then it is stop-chamfered (p.27), a survival of the Gothic weathering.
The muntings are moulded, the vertical treatment giving the effect of great stability to the framing. The carved panels abound in the 'tool cut' patterns fully dealt with in the next chapter. They help to illustrate the value of these enrichments on simple carving, such as the bands of the circlds, the scrolls, and the vases.
The design is typical of the early Renaissance, in which medallions form a conspicuous feature, and in which some Gothic detail may often be traced, as the chamfer to the panels and the arch, and the finial in the example from S. Cross (p.39).
This panelling is said to have formed part of the decoration of the Abbey House at Waltham Abbey, which was granted at the dissolution of the monasteries by Henry VIII to Sir Anthony Denny. The Tudor rose, the portcullis and pomegranate of Catherine of Aragon, as well as the arms of Denny, are repeated several times on the panelling.'

British Galleries:
The decoration in these panels includes popular Renaissance motifs. The helmeted heads are based on those on Roman coins. The symmetrical, scrolling, leafy forms are typical of Renaissance ornament. On the flat panel (18), gouged-out sections were filled with a mixture of chalk and green colouring. This was a new technique at the time. [27/03/2003]
PANELLING.
Oak carved with the emblems of Henry VIII and Katherine of Aragon and with a coat-of-arms, possibly of Denny of Suffolk, quartering another.
English; 1520-30.

Part of a panelled room removed from a house in Waltham Abbey. This Panelling is a remarkable example of the early assimilation of Italian Renaissance decoration in England; the conventional ornaments and medallion heads are both of Italian origin. However Gothic feeling lingers on in the ogee arches and foliage carved on the top row of panels.

Probably made for Robert Fuller (died in 1540), prior at Waltham Abbey, Essex 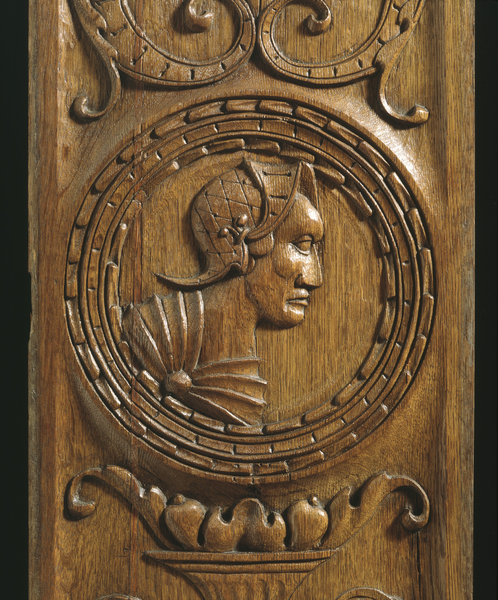