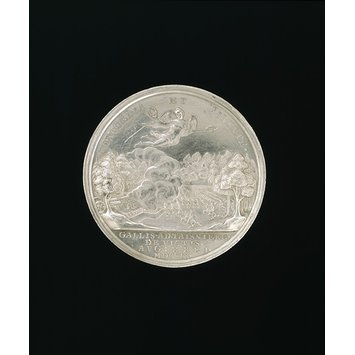 Object Type
This commemorative medal celebrates the victory of the British and the forces of the Holy Roman Emperor over the French at Malplaquet in the Spanish Netherlands (now France) on 31 August 1709.

Queen Anne is portrayed on one side, crowned and wearing an embroidered gown with the collar and star of the Garter. The abbreviated Latin legend on this side translates as 'Anne, by the Grace of God, Queen of Great Britain, France and Ireland'. On the reverse is an allegorical figure of Victory, flying with two laurel wreaths above French entrenchments under attack in a wood. The inscription on this side includes the date and the Latin phrase CONCORDIA ET VIRTUTE ('By concord and virtue').

People
John Croker, or Johann Crocker, (1670-1741) was born in Dresden in Saxony and was apprenticed to a jeweller. He arrived in London in 1691and remained in England for the rest of his life. He became a leading medallist, being appointed Assistant Engraver to the London Mint in 1697 and Chief Engraver in 1705.

Subject Depicted
The War of the Spanish Succession was fought to resolve the question of the Spanish throne following the death of Charles II in 1700. Philip of Anjou, grandson of Louis XIV of France, had been named the sole heir but his claim was disputed. War ensued, with the Holy Roman Empire, the United Provinces (the Dutch) and Britain on one side, and France and Spain on the other.

The Battle of Malplaquet was a major engagement in the war. The combined forces of Britain, under the Duke of Marlborough, and those of the Holy Roman Emperor, under Prince EugŠne of Savoy, met the French army led by Marshal Villars. The French were forced to retreat, though the armies of the Grand Alliance suffered more than 20,000 casualties, twice the number of French casualties. However, the battle was a strategic victory for France as it prevented an Allied advance to Paris.

Medal, silver, struck in commemoration of the battle of Malquet, 31st August, 1709. Obverse, Queen Anne, buts of queen to left, crowned, hair entwined with pearls, lovelock on right shoulder, in embrodered gown with straps on the shoulder, collar and star of the Garter; a bow of pearsl with a brooch on the left shoulder fastens a mantle which passes behind. On the reverse., French entrenchments in a wood attacked; above, Victory flying with two laurel wreaths.

'Anne, by the Grace of God, Queen of Great Britain, France and Ireland'
Decoration; Latin; on face; struck; silver

Medal commemorating the Battle of Malpaquet, made in London and signed by John Croker, 1709

List of Works of Art acquired by the Victoria and Albert Museum during the Year 1902 arranged according to the Dates of Acquisition. London: Her Majesty's Stationary Office. Wyman and Sons. 1906. pp.390

British Galleries:
MEDALS commemorating military victories These medals belong to a series designed to celebrate British victories against France in the War of the Spanish Succession (1702-1713). Each carries a scene recording victory on one side, and Queen Anne's portrait on the other. The Royal Mint produced them in different metals. In 1695, a bronze medal cost about 5 shillings (25p), while a silver version might cost several pounds. Collectors often displayed medals like these in cabinets in private libraries. [27/03/2003] 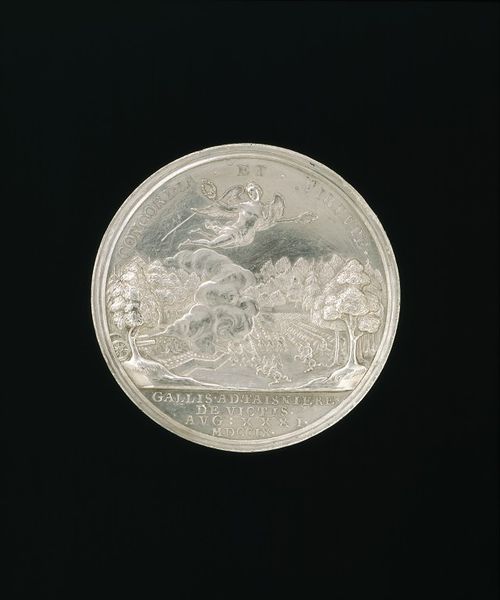