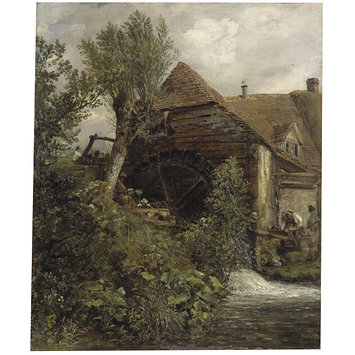 Object Type
Landscape painting in oil became steadily more popular throughout the 19th century. John Constable and J.M.W. Turner take credit for establishing landscape as a suitable theme for painting. Until then, history paintings had been considered more important, but increasingly naturalistic oil paintings of picturesque views of the British landscape appealed to a wider section of the art-buying public.

People
John Constable (1776-1837) may have originally been commissioned by John Pern Tinny to paint this picture as it is thought that Tinny had a family connection with the mill, which was also known as 'Perne's mill.' The painting is based on a sketch made in 1823.

Subjects Depicted
The realistic recording of romantic, tumble down picturesque buildings was dear to Constable's heart and to many other painters who followed him. This recording was necessary since the mill was burnt down in 1825, and was replaced at once with one that was not as picturesque. According to a friend of Constable's, in a letter of 1825, 'The news is, that Mat. Parham's (alias Perne's) mill is burnt to the ground, and exists only on your canvas. A huge misshapen, new bright brick modern improved patent monster is starting up in its stead.'

An undershot water-mill at Gillingham-worked by a branch of the stream from Stourhead.
In another hand.

Printed label showing that the picture was lent by Miss Constable of 64 Hamilton Terrace, N.W., to the Royal Academy Winter Exhibition of Old Masters, 1882. The work was No. 51 in that Exhibition.

Exhibited at the Royal Academy 1827

Historical significance: Constable exhibited at the Royal Academy in 1826 a painting (No.122) entitled 'A Mill at Gillingham in Dorsetshire'; also at the Royal Academy in 1827 another painting (No.n 48) entitled 'Mill, Gillingham, Dorset'; and at the British Institution in1827 a painting (No. 321) 'A Mill at Gillingham, Dorset' with framed measurements 2 ft. 6 ins. x 2 ft. 10 ins. The picture exhibited in 1826 is known to be that now in the possession of Mr. and Mrs. Paul Mellon, (L. ed. M., p. 418 and reproduced Pl. 50). An earlier and smaller version of the composition seen in that picture was painted in1824; this was formerly in the collection of Archdeacon Fisher and is now in the Fitzwilliam Museum, Cambridge. Both these compositions are horizontal, and show the mill from a different angle across the mill-stream. If then No. 288 [Museum No. 1632-1888] was painted for exhibition at the Royal Academy it must be the work shown in 1827. It was doubtless the painting of this subject shown by the artist at Worcester in 1835; the description of No.68 in the exhibition, 'A Water Mill' by Constable, in Berrows Worcester Journal, 23 July 1835, quoted by Windsor, p. 128, mentions the men grinding their scythes, a detail which occurs in No. 288 (Museum No. 1632-1888) but in neither of the other versions of the subject mentioned above. The account in the Worcester Journal goes on to say that the picture "appears to have been painted some years". Holmes, p. 248, wrongly identifies the painting now belonging to Mr. and Mrs. Paul Mellon (then in the C. A. Barton Collection) as that exhibited at the Royal Academy in 1827. He is doubtless correct in identifying No. 288 [Museum No. 1632-1888] as Lot 57, 'Gillingham Mill, Dorsetshire', in the Executors' sale, 16 May 1838. This lot was bought by Leslie-that is to say, bought in-for £37 16s.

This upright composition may have originated in a commission given by J. P. Tinney, the owner of Constable's 'Stratford Mill', but never fulfilled. Constable had undertaken to paint for him two upright landscapes the size of the 'Cathedral' (L. ed. S., p. 148, Constable's letter of 20 August 1823, to his wife). On the subjects for these projected pictures, Constable wrote to Fisher on 16 December 1823: "I am settled, for the Exhibition. My Waterloo must be done, and one other, perhaps one of Tinney's, Dedham, but more probably my Lock. I must visit Gillingham again for a subject for the other next summer" (Beckett, VI, p. 146). Again, in his letter of 27 May 1824 to Fisher, Constable says: "Tinney ... is anxious to have his ancestors mill, and a view of Salisbury, which we are [to] look for when I come to you" (Beckett, VI, p. 160). Beckett shows, p. 131, that Tinney, whose full name was John Pern Tinney, probably had a family connection with the mill, which was known as Parham' s (or Perne' s) Mill. However, at Constable's urgent request, Tinney, in a letter of 4 November 1824, released him from the obligation to paint the two upright pictures for him (Beckett, VI, p. 178). Beckett, p. 230, suggests that No. 288(Museum No. 1632-1888) is actually one of the uprights which Constable had been painting for Tinney before their relations had been broken off: He did not revisit Gillingham to make the sketch for Tinney's picture as he proposed and No. 288 (Museum No. 1632-1888) is presumably based on a sketch made in 1823; e.g. that in the collection of the Earl of Haddington. In 1825 the mill was burnt down. Fisher wrote to Constable in September 1825: "The news is, that Mat. Parham's (alias Perne's) mill is burnt to the ground, and exists only on your canvas. A huge misshapen, new, bright, brick, modern, improved, patent monster is starting up in its stead" (Beckett, VI, p. 206). When the painting was on loan to Worcester, E. Leader Williams (the honorary secretary of the Worcester Literary and Scientific Institution) wrote to Constable "I have thought so much of that sweet little picture-the gable end of the mill, with the slimy mill wheel-that I should be delighted to take a copy of it" (Beckett, V, p. 62). His son, who became known as B. W. Leader, R.A., told Lord Windsor, c.1903, that this copy of his father's was sold as the original and that he had seen it hanging at the Grosvenor Galleries as a genuine picture (Windsor, p. 137). It seems however that Mr. Leader was in error and in any case was thinking of the exhibition of No. 288 at the Royal Academy Winter Exhibition in 1882 (Beckett, V, p. 65).

British Galleries:
Landscape painting had become extremely popular by the 1880s. John Constable and J.M.W. Turner take credit for establishing landscape as an important theme for painting. Until then, historical scenes had been considered more important. Constable was interested in painting local scenery in a 'naturalistic' style. This painting of a mill is based on an earlier sketch. [27/03/2003] 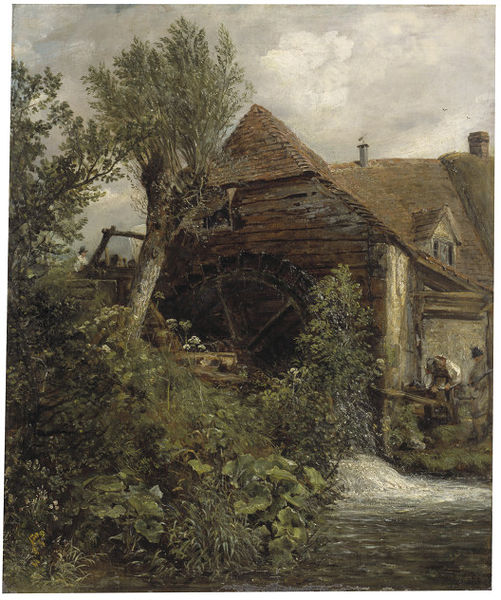