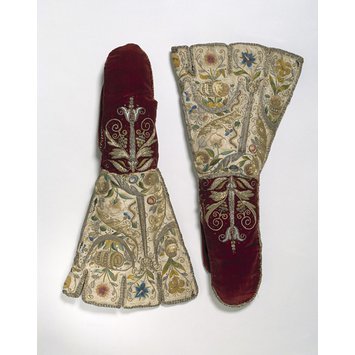 Object Type
This mitten had a decorative rather than practical function. Like many of the embroidered gloves made during this period, its purpose was to show off the wearer's wealth and status.

Materials & Making
The crimson silk velvet mitten has a richly embroidered white satin gauntlet. The embroidery features silver and silver-gilt thread and purl, with couched work and coloured silks and is worked in long and short and satin stitches.

Subjects Depicted
Familiar flowers such as borage, pinks and lilies, as well as insects and fruits, scattered amongst the foliage, adorn the gauntlet. In the centre of each cuff and repeated back and front, is a pillar entwined with a sprouting vine. It may have been inspired by similar motifs in Geffrey Whitney's book, 'A Choice of Emblemes', (1586). Full of 'devices' or emblems (images associated with moral or allegorical tales), Whitney's 'Choice' was the first English emblem book and a great influence on design of the decorative arts during the Elizabethan and Jacobean periods. Although the precise meanings of many devices are lost today, they would have communicated from the wearer to observers in the way that badges and logos do today.

From the Annual Register of 1759:
“At the sale of the Earl of Arran’s curiosities in Covent Garden the Gloves given by King Henry the 8th to Sir Anthy. Denny were sold for £38.17.0, the Gloves given by King James the 1st to Edwd. Denny Esq (son of Sir Anthy.) for £22.1.0, the mittens given by Queen Elizth. to Sir Edwd. Denny’s lady for £25.4.0 and the Scarf given by King Charles the 1st for £10.10.0, all of which were bought for Sir Thomas Denny of Ireland, who is lineally descended from the said Sir Anthony Denny, one of the Executors of King Henry the VIII.”

Pair of mittens, crimson velvet, white satin, embroidered, embroidered in England and said to have been a gift from Elizabeth I to her maid of honour, Margaret Edgcumbe wife of Sir Edward Denny, about 1600

British Galleries:
Courtiers frequently presented embroidered and scented gloves as gifts. On these mittens you can see flowers, insects and a pillar entwined with a vine. Such details often had symbolic meaning for those giving or receiving these very personal gifts, although the imagery may now be obscure. [27/03/2003] 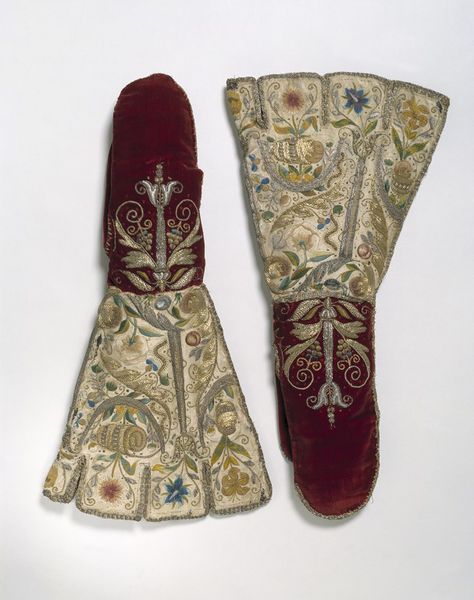