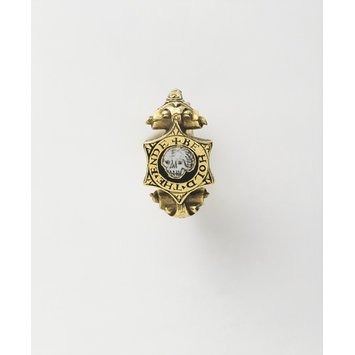 Object Type
The bezel (head) of this ring is enamelled in white with a death's head surrounded by the inscription 'BE HOLD THE ENDE'. The second inscription, 'RATHER DEATH THAN FALS FAYTH', runs round the edge. On the reverse of the bezel are the initials 'ML' connected by a true lover's knot.

Ownership & Use
This ring appears to be both a memento mori ring, which reminds the wearer that she or he must die, and a marriage ring. The second inscription on the ring ('RATHER DEATH THAN FALS FAYTH' ) and the true lover's knot that unites the two initials suggest that it was used as a betrothal or marriage ring by 'M' and 'L', although we do not know who they were. The solemn vows of marriage are associated with death: 'till death us do part'.

The juxtaposition of memento mori and marriage imagery would not have seemed strange to the ring’s first owner. In the painting of the ‘Judd Marriage’, 1560, now in the Dulwich Picture Gallery, marriage and death are both seen as rites of passage. The earthly, transitory nature of marriage is contrasted with the eternity of death and judgment. The couple exchange their vows over a skull whilst the motto above reads:

inscribed 'BE HOLD THE ENDE' and 'RATHER DEATH THAN FALS FAYTH'

Gold and enamel memento mori ring inscribed 'BE HOLD THE ENDE' and 'RATHER DEATH THAN FALS FAYTH'. England, about 1550-1600.

British Galleries:
It was not uncommon to associate the vows of marriage with the remembrance of death. The true lovers' knot and inscription on this ring suggest it marked a betrothal or marriage. Rings were also given to family and friends at a funeral, in commemoration of the dead. [27/03/2003]
Treasures of the Royal Courts: Tudors, Stuarts and the Russian Tsars label text:

Jewels decorated with skulls, coffins and crossbones reminded the wearer of the need to live a moral life because death and judgement were inevitable. The
inscription ‘Rather death than fals fayth’ and the intertwined initials suggest that this ring was a lover’s gift.

England
Engraved gold and enamel
Inscribed ‘Be hold the ende’ and ‘Rather death than fals fayth’,
and initialled ‘ML’
Bequeathed by Charlotte Frances Gerard
V&A 13-1888 [] 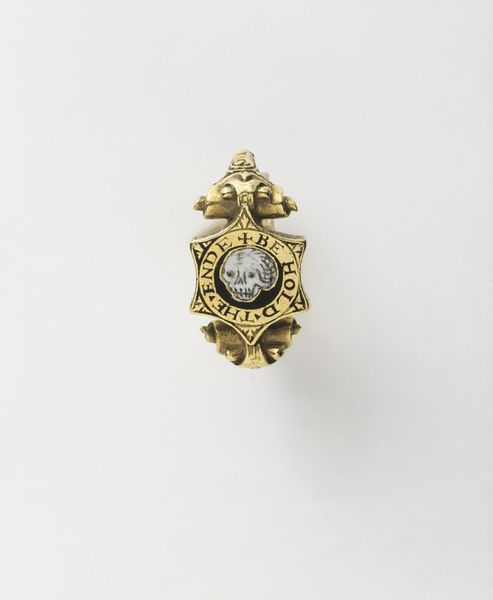