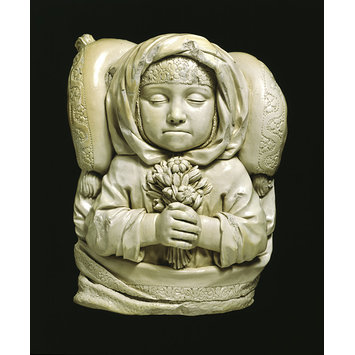 Object Type
One of the earliest experiments in European ceramic sculpture, this object was commissioned by the father of the dead child in order to capture her likeness and perpetuate her memory. It was a personal and private sculpture, reflecting the grief of the little girl's family, and perhaps not intended for open display in the house.

People
Lydia Dwight was six years old when she died on 3 March 1674 (1673 by the Old Calendar). The fact that the next daughter was also christened Lydia does not suggest lack of grief on the part of the parents, but was usual practice in an age noted for its high infant mortality.

Materials & Making
John Dwight's first patent for salt-glazed stoneware, of 1672, did not list statues and figures among the types of product to be protected. They were, however, included in his second patent of 1684, when he had apparently stopped making them. Almost all his figures, like these two examples, were actually made in the 1670s. He is known to have shown a bust of Dr Willis and a figure to members of the Royal Society in 1674 and was clearly attempting to adapt his tough new material to the delicate art of modelling in clay, terracotta or wax at exactly the time his daughter Lydia died. The identity of the four different modellers involved in his experiments, assumed to be from Italy or the Low Countries, still remain a mystery. Dwight's failure to make commercial use of his stoneware figures has denied him the role of founder of the later tradition of English pottery and porcelain figures. But his attempts to link the stoneware material to art does have parallels with Josiah Wedgwood and Sir Henry Doulton in the 18th and 19th centuries.

Figure of Lydia Dwight, half-length recumbent, grey salt-glazed stoneware. Portrait of a dead child lying on a pillow decorated with lace. Lace also decorates her cover, and her headdress. She wares a hood and 'grasps' a posy of flowers.

Made in London at the Fulham factory of John Dwight (born in Todenham, Gloucestershire, about 1633, died in Fulham, near London, 1703).

Figure, stoneware, depicting a dead child, Lydia Dwight, made in London at the Fulham factory of John Dwight, 1674

British Galleries:
Lydia Dwight was the daughter of John Dwight, founder of the Fulham pottery. She died aged six in 1674. The figure of Lydia dead shows her dressed in her burial clothes, clutching a posy of flowers. White was an appropriate mourning colour for a child. The figure of Lydia standing represents her resurrection. Belief in life after death was a great comfort to the living. Her burial shroud hangs loosely around her body, with symbols of life (flowers) and death (a skull) at her feet. [27/03/2003] 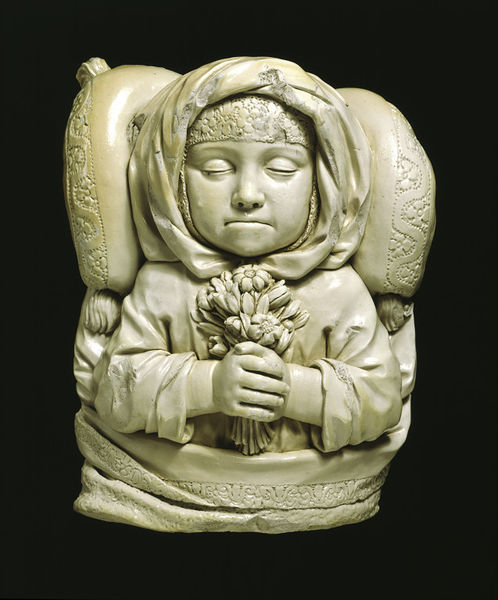