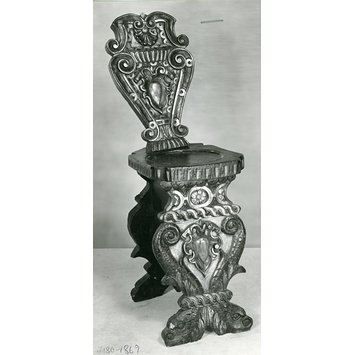 By about 1550, heavy chairs made out of boards and carved with grotesque ornament appeared in Italy, especially Venice, where the carving was most extravagant. They were referred to as sgabelli d' appoggio or scanni col pozzo (literally, stools with backs) and used mostly as hall chairs or dining chairs. Their form became highly popular throughout Europe, including England, where they were used as garden chairs at Ham House (Surrey), the suburban residence of the 1st Duke of Lauderdale(1616 - 1682) and as gallery chairs at Arundel House, the London town house of the 14th Earl of Arundel (1585 - 1646).

Sgabello chair, carved, part-gilt and stained walnut, with a square dished seat and a vase-shaped backrest, front and back 'feet' or supporting boards, the sides of the front 'feet' made up of two diverging dolphins. The backrest is emblazoned with an unidentified coat of arms in a strapwork cartouche, bordered by two narrow 'S' scrolls and surmounted by a crest in the form of two converging bracket scrolls and a suspended shell. The seat has four indented corners and fluted edges at the front and sides. The top of the front 'feet' board is carved with a chain frieze decorated with rosettes, and a guilloche frieze. The sides of these 'feet' are made up of two diverging dolphins, which border a cartouche bearing the same coat arms as those on the backrest. The back 'feet' are plain but the edges are cut in such a way as to follow the profile of the front 'feet'.

Various details are highlighted with gilding: they include the edges of the 'S' scrolled borders, the friezes, and the crests and 'beards' of the dolphins. Gold paint has been applied to the backgrounds of the shell and the two cartouches framing the coats of arms, and the fluting on the edges of the seat. Water gilding was originally used, and much of the surface has worn away, revealing Armenian bole on the lower 'S' scroll border of the backrest, and on both coats of arms. The only surfaces to be burnished are the chain friezes and rosettes, and the rest seem to be matt.

This chair formerly belonged to Jules Soulages of Toulouse (1812 - 1856) and was exhibited, as part of his collection, at Marlborough House between December 1856 and January 1857. It was purchased by the South Kensington Museum for £15 in 1860.

Historical significance: Although this sgabello is comparatively modest, its provenance remains unknown and the carving not of the highest standard, it is nevertheless almost certainly an authentic Italian sgabello. Although doubt has been cast on some pieces, particularly the furniture, in Jules Soulage's collections in recent years, they nevertheless include important exceptions such as this item.

Heavily carved chairs, known as sgabelli d'appoggio , or 'stools with a back' (John Florio: A Worlde of Wordes (London, 1598), date from about 1550 until 1630. They were usually found in halls, bedchambers and often served as dining chairs. The term derives from the Latin word scabellum and was probably first used in about 1550: the Medici inventory of 1553 referrs to two sghabelli verdi with ducal arms in the Palazzo Vecchia. The Pollani inventory (Venice, 1592) includes twelve scagni de nogara intagiade et doradi col pozo (walnut stools carved and gilt with a back) and it was in Venice that such chairs were most extravagantly decorated. An engraving of 1610 (Giacomo Franco: Habiti Huomini et Donne venitiane (Venice, 1610) shows Sebastiano Venier, leader of the Venetian fleet at the Battle of Lepanto (1571) on an emblazoned stool, as lavishly carved as any surviving sgabelli. Venier sits on a plumped up cushion, which would have been necessary, to alleviate the discomfort of a hard wooden seat. The seats of the chairs were often dished so as to keep cushions in position.

Comparable chairs
Ferenc Batári, and Erzsébet Vadászi ; edited by Elvira Király : Art of furniture-making from the Gothic to the Biedermeier: European Furniture from the 15th to the 19th Century in the Nagytétény
Castle Museum ([Budapest : Museum of Applied Arts], 2002.), no. 11, p.23-24