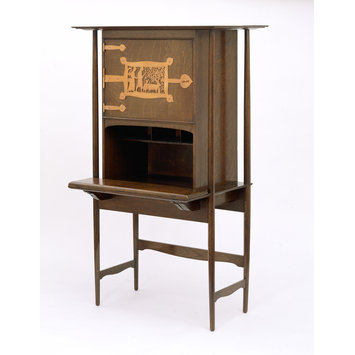 Object Type
This writing desk is similar in form to a bureau, introduced in the17th century, in which a folding writing surface is combined with pigeon-holes and other storage space. However its designer, the architect C.F.A. Voysey (1857-1941), did not replicate the shape of conventional bureaux in this piece. Traditional bureaux often included details drawn from classical architecture, including columns, pediments and cornices, and the bases were enclosed cupboards. However, the lower section of this object is open, the writing surface does not fold up at an angle to cover the pigeon-holes and there is no architectural detailing at the top.

People
This desk was made for the home of William and Haydee Ward-Higgs in Bayswater, London. He was a successful solicitor, and the couple shared advanced artistic tastes. Voysey was the architect of many country houses, but on this occasion he only designed the interiors and furniture for an existing property. The desk is a unique piece of furniture produced for a particular client.

Subjects Depicted
The scene depicted on the pierced copper hinge plate shows a rural family group strolling through a pastoral English landscape, framed by an arrangement of heart motifs. This type of emblematic decoration demonstrates how central the ideas of home, family and England were to Voysey's architecture and domestic designs.

Design & Designing
The original design for the desk shows it stained green, with blood red leather behind a brass hinge. Neither of these coloured features was applied and the desk remained unvarnished, merely polished, as Voysey specified for much of his furniture, with hinges in copper rather than brass.

Oak writing desk with broad, flat cornice supported by four uprights, between which (but not connected to) is a carcase, comprising an enclosed upper section with a door, containing a shelf, above an open lower section containing three pigeon holes. The writing surface is a hinged plank folding outward from the front of the open section of the carcase, supported on two integral sliders. The uprights surrounding the carcase are continuous with the legs below the level of the writing surface. There are stretchers to the right, left and rear of the desk. The front of the door has three decorative copper hinges, the upper and lower being identical, and the centre being the full width of the door, pierced to represent a pastoral scene of a family group walking in the countryside.

Designed by C.F.A. Voysey in 1896 and presumably made as part of a commission to furnish the home of William and Haydee Ward-Higgs at 23 Queensborough Terrace, Bayswater, London in 1898. Maker unknown. Inherited by Mrs Joan Bottard, the Ward-Higgs's daughter, and sold by her to the V&A.

Arts and Crafts designs first came to the Larsson's attention in 1893, when they began to take the magazine The Studio. From about 1900 Arts and Crafts forms, especially those of Voysey, began to appear in the house. [1997]
WRITING DESK
ENGLISH; 1896
Oak with copper hinges and fittings

Designed by C.F.A. Voysey and made by W.H. Tingey for W. Ward Higgs. [NB now known not to be made by Tingey] [pre October 2000]
This desk was designed by Voysey as part of a suite for W. Ward Higgs, the otheir pieces of which are in the Cheltenham Museum and Art Gallery. A design exists in the Museum's Prints, Drawings and Paintings Collection showing blood red leather behind the brass panel and the oak stained green. Neither of these features were included in the version seen here. [1992]
International Arts & Crafts:
Writing desk
1896
English; designed by C.F.A. Voysey
Oak and copper
V&A:W6-1953 [17/03/2005] 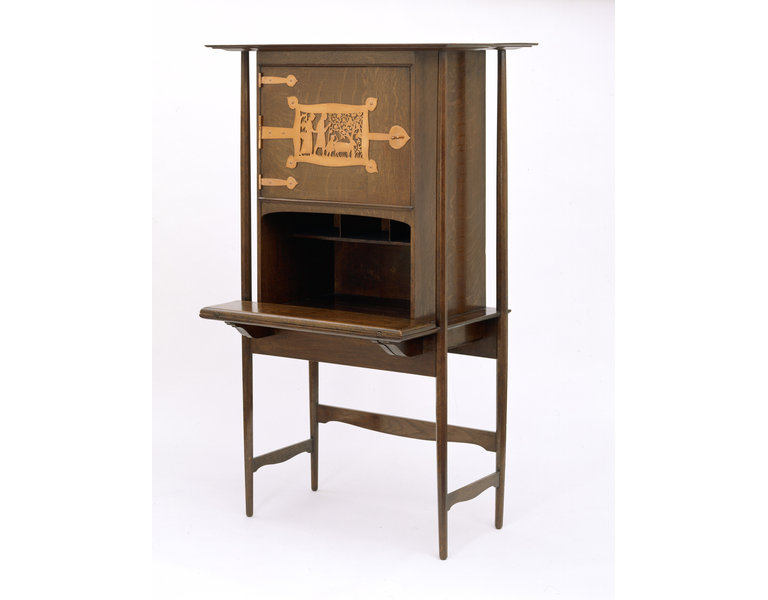