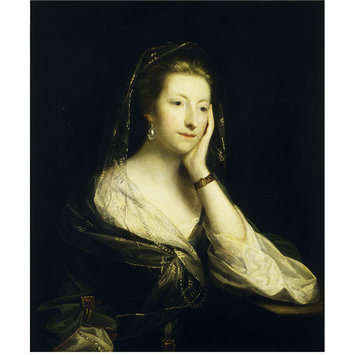 Object Type
Wealthy families could afford the services of a fashionable painter, and Sir Joshua Reynolds produced many oil-painted portraits of this type. He followed the practice of portraitists of the day in only painting the faces and hands of his sitters; from 1755 until 1760 he farmed out the drapery and costume painting to the specialist, Peter Toms. After that date he employed his own studio assistants whom he had trained.

People
Mary Barnardiston (1730-1760) was the daughter of Arthur Barnardiston, who had inherited Brightwell Hall, Suffolk from his elder brother, Samuel. They were nephews of the enormously rich Sir Samuel Barnardiston, Whig politician and deputy governor of the East India Company who had been a merchant in Smyrna (Turkey). Reynolds was commissioned to paint the portraits of Mary in 1754-1755 and her elder sister Ann in 1757. Mary died unmarried in 1760 and according to Reynolds' papers, the family ordered a copy of her portrait in 1762.

Frame
The remarkable Rococo frame is typical of the late 1750s and is an important example of the delicate, light and airy style, a contrast to the earlier heavy Baroque frames of the first part of the century. The reason that so few good examples survive is that their light construction makes them vulnerable.

"Mrs. Thos. Whetham
late Ann Barnardiston
m.T.Whetham 1752
Painted
By Sir Joshua Reynolds."
Written in a nineteenth-century hand on a label pasted on to the back of the painting.

British Galleries:
The Barnardiston family commissioned portraits of each of their two daughters from Joshua Reynolds, the rising star among English portrait painters. They were typical of the rich, non-aristocratic patrons whose custom helped establish Reynolds' reputation and financial success. Reynolds followed standard practice by painting the faces and hands of his subjects, leaving the costume to a specialist drapery painter. [27/03/2003] 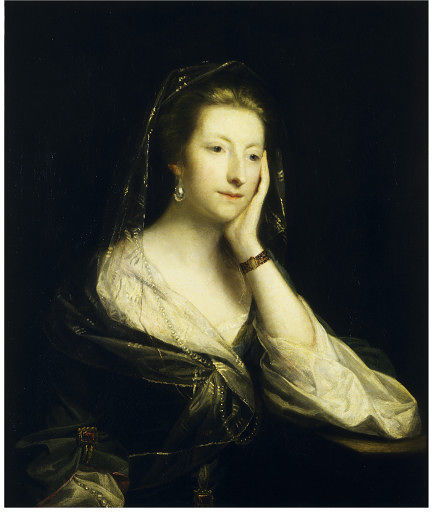