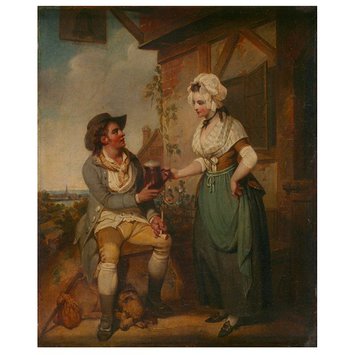 At the Inn Door

Historical Significance: Henry Singleton was brought up by his uncle William Singleton, a miniaturist and portrait painter. Singleton started his career very early, working as a professional portrait painter from the age of sixteen. He attended the Royal Academy schools and received a gold medal for <i>Alexander’s Feast</i> in 1788.

Singleton was certainly considered a promising painter, as indicated by the commission to paint the General Assembly of the Royal Academy in 1793. The resulting canvas, <i>The Royal Academicians in General Assembly</i>, (1795; Royal Academy of Arts London.), is an imposing showcase of the most important figures in the Academy under Benjamin West (1738-1820). Singleton never became a full academician himself, despite two attempts to join, in 1807 and 1811.

Many of Singleton’s work represent historical or contemporary events, such as <i>Paul I Granting Liberty to Kosciuszko</i> (1797) and <i>The Death of Captain Alexander Hood after Capturing the French 74 ‘L'Hercule’, 21 April 1798</i>. Many of these were engraved in mezzotint and consequently became popular.

Another large group of Singleton’s works are based on mythological, biblical and Shakespearian themes, for example <i>Manto and Tiresias</i> (exhibited 1792, Tate Britain) and <i>Ariel on a Bat’s Back</i> (exhibited 1819, Tate Britain). He also painted some portraits, for example of the writer James Boswell (1740-1795) (c. 1795; Edinburgh, National Portrait Gallery).

Singleton has never fully developed his potential as a history painter. His later works, smaller in scale and less confident in the depiction of figures, can be described as sentimental. He produced many book illustrations, and was one of the first English lithographers.

This painting depicts a scene in front of an inn door. The standing woman appears to be serving a jug to the seated man. The figures are shown in late eighteenth-century dress, which would have been considered slightly old-fashioned at the time of painting this picture. This emphasises the sentimental tone of the picture. Genre scenes of this type are influenced by the style of artists such as George Morland (1763–1804) and Francis Wheatley (1747–1801). The quality and style of the painting indicates that it was made for reproduction.

The museum file indicates that a coloured engraving by William Nutter (1754-1802) was made after this picture. It was captioned: “THE ALE-HOUSE DOOR/ Come my Dear! I’ll pledge you.” Nutter cooperated with Singleton on a number of images. Another painting by Singleton in the V&A collection, catalogued under 1835-1900, was also engraved by him.

Singleton turned into producing images for engraving late in his career. Although he had never achieved the status of a respected history painter, he was nevertheless very successful and popular through his prints and book illustrations. Cooperation with engravers was an effective and profitable method of answering the growing demand for him images. 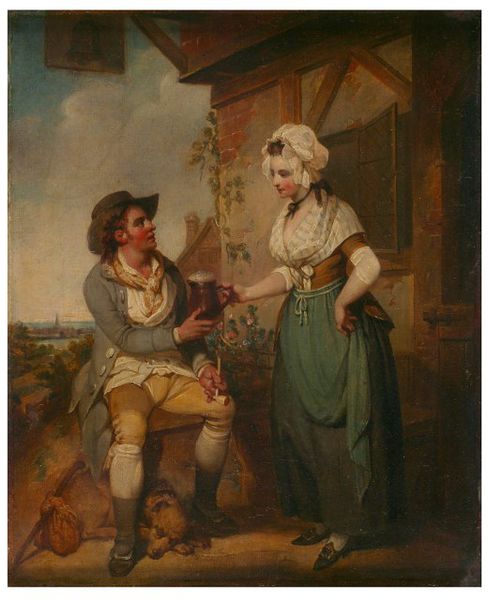