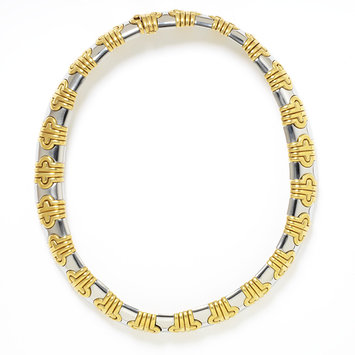 During the 1980s and 1990s, commercial jewellers and great jewellery houses such as Bulgari, in Rome developed innovative designs. Famous Italian fashion designers were also at the forefront of the fashion world.

Bulgari, of Greek origin, came to Rome in 1881. Today's flagship store in the Via Condotti, where the rich and famous bought their jewels, was opened in 1905. Bulgari is today represented worldwide.

Bulgari of Rome combined steel with gold in a series based on bracket shapes or parentesi (parenthesis). Gianni Bulgari was doodling during a meeting about future designs, drawing square, round and double brackets . He suddenly realized the potential of this simple modular pattern made of interlocking graphic symbols. In 1982 the iconic 'Parentesi line' was introduced.

Flexible gold and stainless steel necklace composed of modular interlocking units. The steel components are deeply waisted rectangular shapes which interlock with groups of gold elements. Each gold group is formed of four elements, comprising two examples of each of two shapes. The centre of each group has two identical vertical elements, one positioned with with a central horizontal projection to the left, the other with the projection to the right. The projections interlock with the curved sections of flanking vertical elements in gold.

The modular units are threaded on two chains which are not visible unless the units are manipulated to expose them.

The catch is formed within one of the gold sections. It has, as an additional security device, a hinged bar, which, when closed in position, locks the catch by running a pin through its tongue.

Amanda Triossi, joint author of a history of Bulgari, has kindly endeavoured to find out the significance of the the mark 'BA 4255' noted under Marks/Subjects. For a period (dates unknown) it is reported to have been applied by Pier Vittoria Crova s.r.l. at Bulgari's request to objects made for export to the United States of America. However, this does not necessarily mean that the object went to the United States. It is not known at what date the mark ceased to be used, but it must have been prior to 1998.

All the marks described were punched by the makers, following Italian practice (they were not applied by an assay office).

'BVLGARI'
on back of hinged locking bar of catch; punched

'750' within an elongated hexagon
Standard mark (Hallmark); back of tongue of catch; punched

Five-pointed star followed by '2237 AL' within a rectangle with rounded ends (the mark of Pier Vittorio Crova s.r.l., Valenza (near Alessandria)
Maker's mark (Hallmark); back of tongue of catch; punched

'M' (indicating base metal)
Standard mark (Hallmark); on back of one stainless steel element next to catch; punched

The 'Parentesi' necklace was first made in 1982. The design was conceived at a meeting at which there was a discussion about whether inspiration could come only from a carefully nurtured knowledge of design and art history or whether it could also come from randomly selected graphic symbols. To demonstrate the latter theory, Gianni Bulgari (born 1935; association with firm ended 1987) drew a succession of brackets (‘parentesi'). These were developed into a design which had four modular units, straight and curved interlocking elements, which could be used in different patterns and materials, including gold, steel, coral, haematite, and precious stones. The metal modules are cast or machined, and finished by hand to a high standard, but they are economical to make, and they can be used to form a range of jewels, including rings, earrings, bracelets and necklaces.

Historical significance: The 'Parentesi' design has been widely copied, and its success has led to the introduction by Bulgari of further modular designs.

Necklace of gold and stainless steel, by Bulgari, Italy 1982 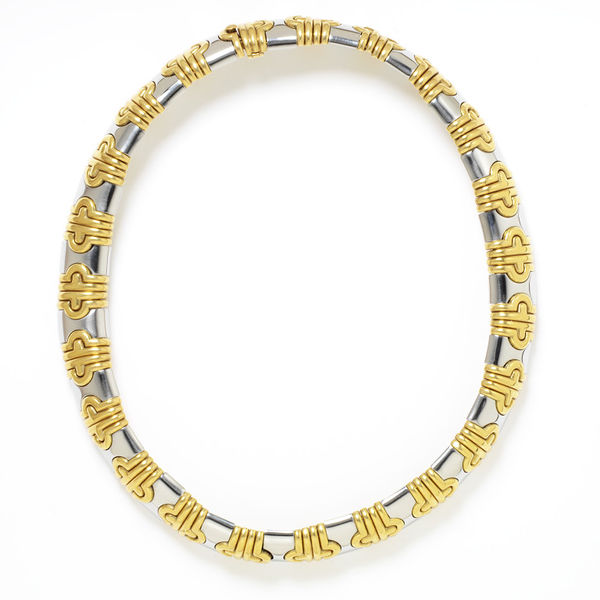