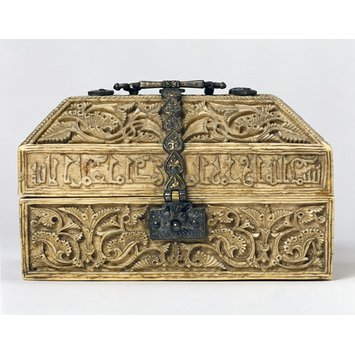 This small ivory casket has carved decoration of stylised plants. It covers the sides of the base and the top of the lid. Around the sides of the lid there is an Arabic inscription composed in a decorative style of script known as 'floriated Kufic'. It is not certain whether the silver hinges and hasp are original.

Ivories of this kind were produced in Spain during the 10th and 11th centuries. At this time most of the country was ruled by Muslim Arabs of the Umayyad dynasty. The inscription tells us that this casket was made for the daughter of the Umayyad caliph 'Abd al-Rahman III. His name is followed by a short prayer said only for the deceased. We can therefore date the casket to the period after the caliph's death in 961.

One theory suggests that this type of decoration consisting entirely of plants, with its associations with fertility, was suitable for objects owned by women. Yet the same type of decoration appears in the carved marble wall panels of the reception hall in Madinat al-Zahra. This hall was used only by men and was part of the huge palace complex 'Abd al-Rahman built near Cordoba. Designers therefore used the same style of decoration in different media. This suggests at the very least that there was some central control in the production of all the decorative arts at this time.

This casket was formerly suspected of being a 19th-century imitation, and perhaps the work of the famous Spanish ivory forger, Francisco Pallás y Puig (1859-1926). However, recent radiocarbon analyses on this object show that the ivory used was medieval, dating from the 9th century. It is very likely therefore to be an original object, and a pair with 301-1866, made at the same time for the same daughter of 'Abd al-Rahman III. The commission may have commemorated a significant event in her life, such as a marriage or birth of a son.

Ivory casket with a truncated pyramidal lid, and decorated on all sides with symmetrical designs of palmette scrolls. Mounted with silver-gilt mounts enriched with niello. An Arabic inscription around the base of the lid refers to the daughter of the Spanish-Umayyad Caliph, 'Abd al-Rahman III. Its inscription is identical to that on another 10th-century Cordoban ivory in the V&A (301-1866), though with some spelling mistakes.

'Bismillah al-rahman al-ra[him] hadha ma amala al-ibnah al-sayyidah ibnat 'abd al-rahman amir al-mu'minin rahmat allah 'alayhi wa ridhwanihi'
'In the name of God, the Merciful, the Com[passionate]. This is what the young lady ordered, the daughter of 'Abd al-Rahman, Commander of the Faithful -- May God's mercy and favour be his!'
Inscription; decoration; Arabic (in the style known as floriated Kufic); around the base of the lid; carved

(sic) بسم الله الرحمن الر]حيم[ هذا ما عمل الابنة (front side)
(sic) السيدة ابنة عبد الم حمن (left short side)
الله (sic) امير المؤمنين رعمة (back side)
عليه ورضوانه (right short side)
In the name of God, the Compassionate, the Merciful. This is what was made for the daughter, the lady, the daughter of 'Abd al-Raḥmān, Commander of the Faithful, may God's mercy and favour be his!
The reading of this casket's inscription was revised in July 2014 by María Antonia Martínez Núñez of the University of Málaga. See attached PDF with her reading and discussion (in Spanish).

This casket was formerly suspected of being a 19th-century imitation of a 10th-century ivory, and perhaps the work of the famous Spanish ivory forger, Francisco Pallás y Puig (1859-1926). However, recent radiocarbon analyses on this object show that the ivory used was medieval, dating from the 9th century. It is very likely therefore to be an original object, and a pair with 301-1866, made for the same daughter of 'Abd al-Rahman III, and very probably at the same time (after his death in 961).

Carved ivory casket with decoration in the form of stylized vegetation, Spain (probably Córdoba), about 962.

Both caskets were made for an unnamed daughter of the caliph Abd al-Rahman III. He died in 961, and as his name is followed by a prayer for the dead, the caskets must have been produced after this date. The leafy scrollwork resembles that on the walls of the caliph's palace at Madinat al-Zahra.

Carved ivory with silver mounts, and with copper-gilt and niello mounts

For a long time this casket was thought to be a 19th-century imitation of a 10th-century Cordoban ivory. It was probably made after the death of the Caliph 'Abd al-Rahman III in 961. 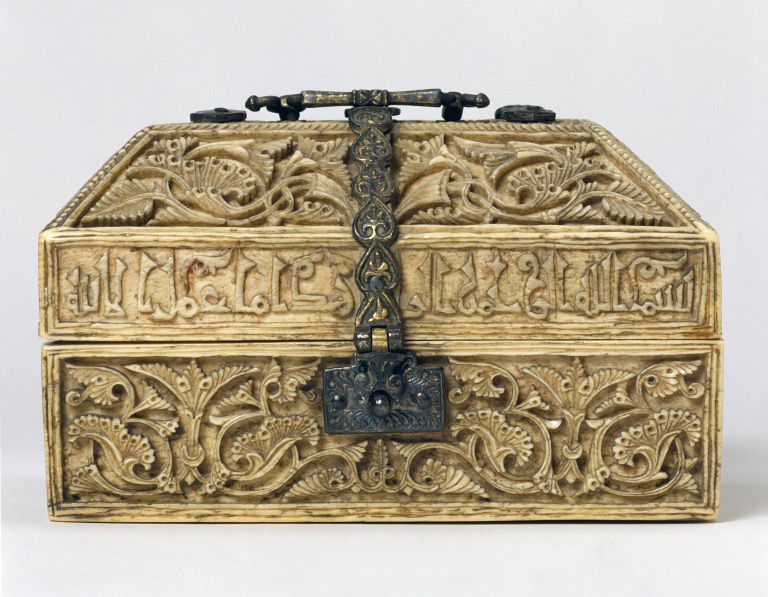