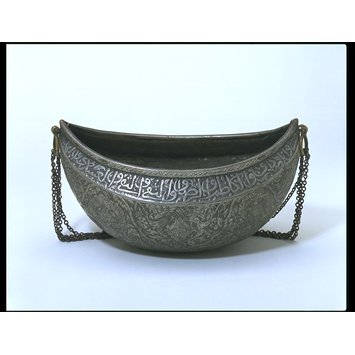 Bowls for collecting alms were used by dervishes, the name given to Muslim mystics who lived in religious poverty. This example is engraved along the rim with a Shi’ite prayer for the Fourteen Immaculates. These were the members of Muhammad's family whom the Shi'ite Muslims of Iran hold in greatest esteem. The Safavid dynasty (ruled 1501-1722), who came to power about the time this bowl was made, were both Shi’ite Muslims and the leaders of a dervish order.

This bowl is made of copper covered with a layer of tin. It would once have shone like silver. This bright surface would have contrasted strongly with the recessed background, which was filled with a black composition.

Dervish's wallet or kashkul, boat-shaped, made of tinned copper and engraved with Arabic text and floral decoration.

Underside of the vessel has owner's mark incised in the 18th century, and superimposed by another owner's mark in the 19th century. Only the date of the earlier mark can be made out under the new inscription.
1145/24 June 1732-13 June 1733

Beggar's bowl
Iran or Afghanistan
About 1500

Bowls for collecting alms were used by dervishes - Muslim mystics who lived in religious poverty. This example is engraved along the rim with a Shi'ite prayer for the Fourteen Immaculates. The Safavid dynasty, who came to power about the time this bowl was made, were both Shi'ites and the leaders of a dervish order.

Copper engraved, tinned and filled with a black composition 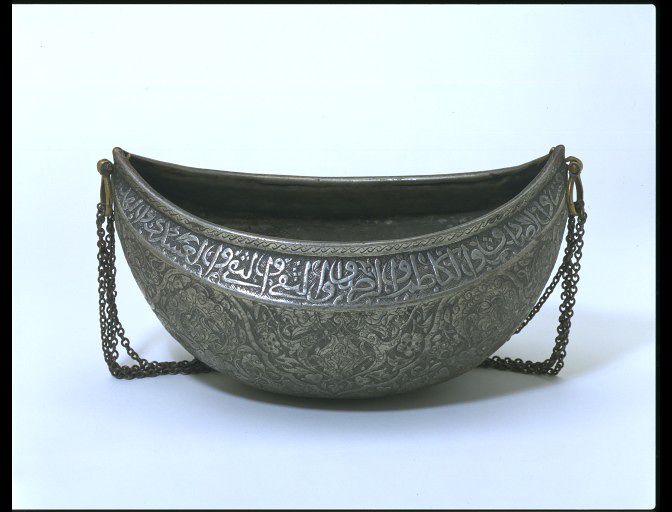