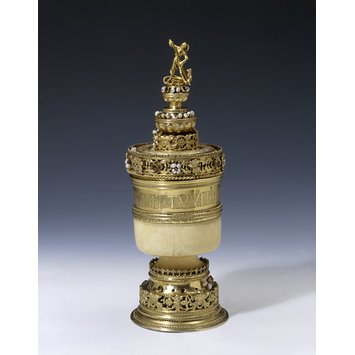 Object Type
'Grace' cups were passed round when a traditional grace (a prayer of thanksgiving) was said to give thanks for the food eaten. Robert Burton, in his Anatomy of Melancholy (1621) described their use as 'a corollary to conclude the feast and continue their mirth, a grace cup came in to cheer their hearts and they drank healths to one another again and again'.

Historical Associations
The silver mounts have London hallmarks for 1525-1526, but the ivory bowl may date back to the 12th century. The bowl has long been associated with the martyred medieval saint Thomas à Becket (born about 1120, died 1170), although this is impossible to prove. Becket was Archbishop of Canterbury under Henry II (ruled 1154-1189). After a lengthy quarrel with Henry, he was murdered by four knights as he knelt praying in Canterbury Cathedral. The initials 'TB' and a bishop's mitre appear on the cover mounts, but the initials cannot be matched to any bishop in the 1520s, when the mounts were made. It is therefore possible that they refer to Becket. The cup has been passed down through the Howard family since 1614.

Design & Designing
This cup is an extremely interesting example of the work of Tudor goldsmiths. It combines Renaissance and Gothic ornament, and is one of the few objects in precious metal that shows the transition between the two styles. An interest in classical ornament can be seen in the cast frieze of masks and ornaments. These were taken from the designs of the painter Hans Burgkmair I (1473-1531), which were circulating in England in the 1520s. There are, however, still signs of Gothic ornament in the pierced cresting around the foot and cover.

Made in London
Several distinct alterations to the mounts can be identified. The physical evidence is as follows: an X-ray revealed that the ivory stem does not fit tightly to the body and may be a later replacement. The shaft of the finial has been resoldered through the cover plate, with some loss of metal on the underside; this has the effect of shortening it. The cover plate is now in tension and bowed, compressing the components; the turning on the underside of the ivory cover has scored the silver-gilt plate; on two of the three larger components the centre portions have been compressed until they are concave; and on the third the gilding on the gadrooning has been worn by the rotating action of screwing down the finial. The collar on the largest component no longer has a structural function. None of the components (except the middle one) fits the shaft tightly. The location of sets of pin-holes on the shaft and on each component indicates that, from the early nineteenth century (1818, 1849), the ring was set between the largest and the next component; the pins were presumably inserted as a strengthening device subsequent to the shortening of the shaft. However, this differs from the 1741 drawing. Later illustrations (1862, 1901) of the cup show the components stacked in a different order again from that indicated by the pin-holes; South Kensington Loan Exhibition, 1862 and Burlington Fine Arts Club Exhibition, 1901. The present arrangement of the finial is an attempt to get closer to its original appearance, as indicated by the 1741 Society of Antiquaries drawing and by the principles governing Renaissance art, which found a tapering form more agreeable.
(P. Glanville, Silver in Tudor and Early Stuart England, No. 7.)

Historical significance: The Howard Grace Cup is an outstanding piece of Tudor Court goldsmiths' work, both as the earliest surviving example of Renaissance influence in the precious metals and because of its history and associations.

A grace-cup was passed around the table after grace had been said.

Gold and silver were essential indicators of high status at court. Intricate decoration added novelty to the costly raw materials used on tableware and jewellery. At New Year courtiers presented gifts to the King and received a gift of gold or silver in return. The exchange demonstrated mutual loyalty and reinforced hierarchy at court. Portrait miniatures were a new, highly personal way of showing favour. Of Henry VIII's 2000 pieces of gold and silver, almost none has survived.

A grace cup was passed around the dinner table after prayers. This ivory cup is traditionally associated with the saint, Thomas Becket (about 1120-1170). It was mounted in silver-gilt during the ownership of Catherine of Aragon (1485-1536), the first of Henry VIII's queens. The cup is an outstanding example of Tudor goldsmith's work, with the antique heads and scrolling foliage making it an early surviving example of Renaissance influence on English silver. [27/03/2003]
Gothic
The Howard Grace Cup
The mounts hallmarked 1525-1526; the cup possibly earlier

A grace cup was used for communal drinking at the end of a meal. Here the ivory bowl may be a relic of St Thomas Becket later given to Catherine of Aragon. The gem-set mounts and her pomegranate emblem could have been added about this time. The lid culminates in a figure of St George.

Turned elephant ivory, with rubies, garnets, pearls and silver-gilt mounts
The mounts made in London
Inscribed in Latin 'Drink thy wine with joy', 'Be sober' and 'Fear God'
Formerly owned by the Howard family

The shallow ivory bowl is of uncertain age but may date back to the 12th century, possibly before 1170 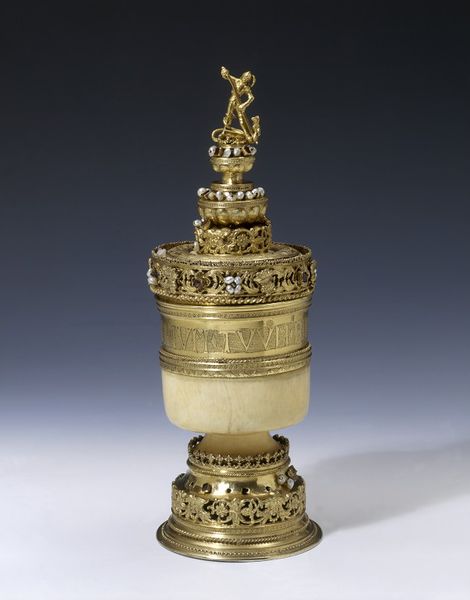