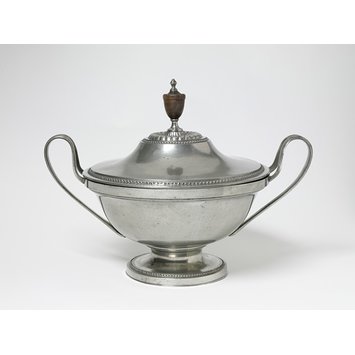 Pewter, was part of everyday life until the 19th century. This tureen is a late example of dining pewter. Intended to serve soup, it may originally have stood on a matching tray or plateau as part of a larger, matching dinner service with pewter plates, sauce tureens and salt cellars. When it was new it would have radiated a bright lustre, not dissimilar to silver. Most households owned some pewter. Even the aristocracy dined from pewter most days, reserving their silver for special occasions.

Although pewter, an alloy consisting primarily of tin, cost only about 20% of the price of silver, its style was every bit as fashion-dependent. Dating from around 1800, this tureen's strong, geometric shape has been inspired by the classical styles of Greece and Rome that were fashionable throughout Europe in this period. Designers aimed for a 'true' or 'correct' style, to be applied universally. The clean lines of this tureen demonstrate the 'noble simplicity and sedate grandeur' preached by the architect Winkelmann. Such 'neoclassical' pewter is relatively rare. By 1800, pewter had largely been superseded by porcelain on the middle class dining table.

Soup tureen and cover of pewter, with a circular bowl of classical profile, with two handles rising above the upper edge. The cover rises to a gadrooned rosette in the middle, surmounted by a vase-shaped wooden finial. Both the foot and cover are decorated with pearled borders.

Pewter was part of everyday life until the 19th century. This tureen is a late example of dining pewter. It may originally have stood on a matching tray or plateau as part of a larger, matching dinner service with pewter plates, sauce tureens and salt cellars. When it was new it would have radiated a bright lustre, not dissimilar to silver. The tureen now has a soft, dull tone to its outer surface, commensurate with pewter of its age. Inside, the metal has not been exposed to the air as often and has retained some of its original bright appearance.

Although pewter cost only about 20% of the cost of silver, its style was every bit as fashion-dependent. Its shape and decoration was dictated by the same aesthetic tastes that governed the appearance of silver, tapestries, ceramics and glass. Most households owned some pewter. Even the aristocracy dined from pewter most days, reserving their silver for special occasions.

Dating from around 1800, this tureen's strong, geometric shape has been inspired by the classical styles of Greece and Rome that were fashionable throughout Europe in this period. Neoclassical pewter is relatively rare. By 1800, pewter had largely been superseded by porcelain on the middle class dining table.

The neoclassical style of the late 18th and early 19th centuries was self-consciously monumental. 'There is only one way for the moderns to become great and perhaps unequalled: I mean by imitating the Ancients', wrote Johann Joachim Winckelmann in On the Imitation of the Painting and Sculpture of the Greeks (1755). Archaeological finds in Italy, at Herculaneaum (1738-40; 1745-65) and Pompeii (1748), encouraged a renewed fervour for classical antiquity, that lasted for over 60 years. Patrons, collectors, 'Grand Tourists' and critics from throughout western Europe marvelled at the ruins and plundered vases, urns, and ewers, not just for riches but for inspiration. Architects such as Giovanni Battista Piranesi, Jean-François de Neufforge and Julien-David Le Roy drew the 'ancient' landscapes and published references of classical ornament. Pewterers, like goldsmiths, made tureens, candlesticks, coffee-pots and salts of bold outline decorated with swags, wreaths, palmettes and rams' heads.

Neoclassicism was not just a fashion but a philosophy. An emphasis on symmetry and proportion appealed to societies increasingly preaching the virtues of logic and rationality. Designers aimed for a 'true' or 'correct' style, to be applied universally. The clean lines of this tureen demonstrate the 'noble simplicity and sedate grandeur' preached by Winkelmann.

A dominant feature of the tureen is the wooden handle on the cover. It is in the form of a Roman urn, as if to champion the classical inspiration for the tureen. The urn form became a stock decorative device of the eighteenth century, not just for architects and sculptors. Classical building facades and funerary monuments may have been topped with urns but so too were eighteenth-century luxury goods. The urn ornamented bedposts, sword-hilts, clocks and fireplaces and inspired the forms of race cups, coffee pots, hot water urns in tea services and tureens in dinner services.

Pewter is an alloy or mixture of metals consisting primarily of tin. Adding metals such as copper and antimony makes pewter harder and more durable. The best alloys contain over 90% tin.

Before 1800 lead was allowed in 'lay metal', a lower-quality alloy used for measures and boxes. Soft lead made casting easier, but was poisonous, so it was forbidden in 'flatware' such as plates, dishes and porringers. Tests do reveal small amounts of up to 0.2%. Modern pewter contains no lead.

Most pewter is cast in moulds. Pewter has a low melting point of around 230 degrees centigrade making it suitable for casting. Pewterers' moulds, made of copper alloys or iron, were expensive however. It paid pewterers to make maximum use of their moulds for a variety of objects. Surviving pewterers' moulds from the 18th century show a clever separation of moulds so that the bases of porringers might also be used as saucers, or the bowls of two-handled cups might also be used as the bases of flagons. The cost of the moulds was the biggest barrier to a newly freed apprentice setting up alone in business. Some apprentices remained with their masters while others hired moulds rather than bought them.

Pewter's softness makes it ideal for engraving. However, repeated polishing will, over time, rub away the fine detail. This tureen was engraved with an owner's name that, by the time the tureen entered the V&A's collections in 1906, had become illegible.

From 1300 to 1800, pewter was as familiar as china is today. The Cornish tin mines were the largest in Europe. Pewter's golden age was between 1650 and 1700. It declined as ceramics, brass and silver plate grew more popular. The Arts and Crafts movement revived pewter around 1900, using traditional manufacturing techniques.

Pewterers were governed by strict controls over the quality of the metal they used, in particular to prevent the inclusion of cheap and harmful lead. When a pewterer became free to trade he registered a touch mark at the local guild. This he stamped on all his wares as his guarantee, under licence, that his works were of good quality. The touch mark contained a device that either carried a pun on his name or related to the symbol of the town guild in which he was registered. The mark sometimes also contained the pewterer's initials. The 'IL' mark on this tureen has not been identified but closely resembles the town mark of Frankfurt. Some touch marks also contained a year. This refers to the date the pewterer registered the mark and became free to trade. It does not record the year the object was made, although it does give an earliest possible date.

A pewterer served an apprenticeship of 4 to seven years in Europe. After their apprenticeships, German pewterers had to embark on a further seven to nine years as journeymen, before they could become masters. They travelled abroad to enhance their skills and acquire new designs. Journeymen's guilds looked after their interests and regulated their behaviour. Inspectors or 'searchers' from the guilds occasionally visited workshops and tested items. Substandard wares, often containing too much lead, incurred fines and were liable to destruction.

In England, the Worshipful Company of Pewterers was established in 1478 to take control of the expanding pewter trade. English pewterers served for seven years as apprentices and then became free to trade.

The V&A holds the national collection of pewter. It contains approximately 1500 items dating from the medieval period to the present day. Much of the V&A's collection shows signs of having been well used in the places which touched most people's lives: home, tavern and church. Elaborate display pieces commemorating royal events survive in better condition, as do the magnificent cups and flagons used in guild ceremonies.

The Museum bought European pewter as early as the 1850s. An interest in English pewter grew after 1900 and increased with the foundation of the Pewter Society in 1918. Large bequests from Colonel Croft Lyons in 1926 and Alfred Yeates in 1945 added over 700 metalwork objects to the collection. Croft Lyons was an avid collector. Many of his personal labels recording where and when he bought items are still stuck to the objects.

The shape and clean lines of the tureen are typically Neoclassical, as is the miniature classical vase of the finial. Pewter resembled silver when it was new, but was a much cheaper metal. It was found in most middling and wealthy households. Even the aristocracy used pewter for most meals, reserving silver for special occasions.

This tureen demonstrates the strong, classical forms inspired by the antiquities of Greece and Rome which characterise much of the pewter produced about 1800. Designers aimed for a 'true' or 'correct' style that offered, according to the architect Johan Winckelman, 'noble simplicity and sedate grandeur'. The restrained classicism of the Napoleonic Empire style was especially popular in Germany. 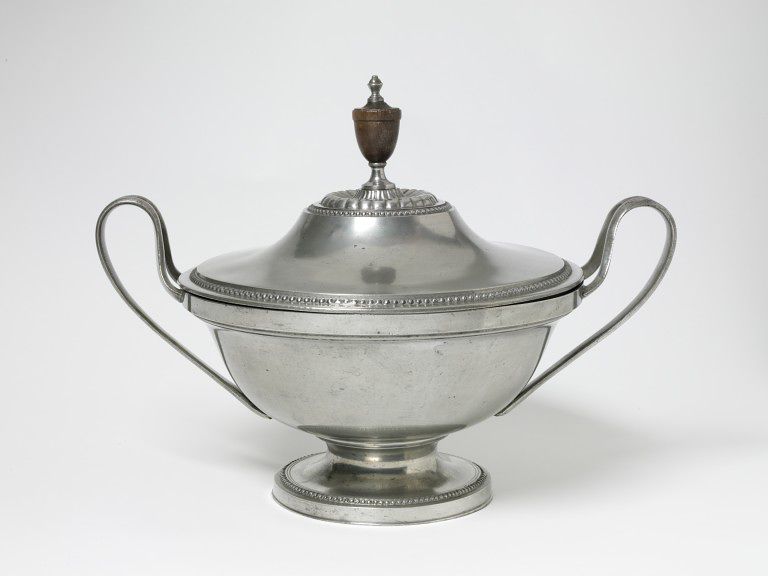