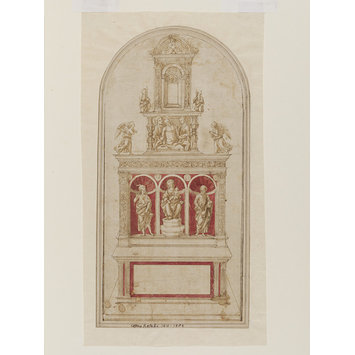 Design for an altar with three niches containing sculpture

Design for an altarpiece

The first three writers named in the bibliography attribute the drawings tentatively to Francesco di Simone, while Maclagan and Longhurst suggest his cousin Andrea Ferrucci. See no. 2 above for a discussion of the problem of classifying this drawing. It is 'Design D' in Kurz's article.

2.
Design for an altar with an arch framing a ciborium; mounted in a border decorated with trophies etc as on Vasari's mounts Inscribed within a cartouche in the middle of the lower border 'Desiderio da Settignano scult' Black chalk, pen and ink and wash, eightened with white, on paper partly tinted pink
171/2 x 11(445 x 280) 4903

It was doubtless Vasari who wrote Desiderio's name in the cartouche, and he obviously ascribed the design to Desiderio because the ciborium resembles Desiderio's famous tabernacle in S. Lorenzo, Florence. Half of Vasa ri's ornamental border is cut away on each side, and the whole of the top has been cut off in order to make the sheet into the shape of an arch. At a later date the rectangular shape was restored by laying the drawing down on another sheet of paper. No. 3 below, obviously by the same artist, was acquired by the Museum at the Wellesley sale also and probably belonged to Vasari too, though it has lost its ornamental border. Both drawings were attributed to Desiderio in the sale catalogue. A third drawing in the Museum (no. 4) is again by the same hand and probably represents another project for the same altar.
With these three drawings Dr Kurz, in his second article, associates four drawings in other collections which are manifestly by the same hand and connected with the same project. The artist, according to Kurz, made all these drawings, each different from the other, in an attempt to solve the difficult problem of combining a tabernacle with an altar. The seven drawings connected with the project are as follows:

Design B. No. 3 below. Kurz, pI. 16b. Design C. No. 1436E in the Uffizi. Kurz, pl. 16c. Usually attributed to Lorenzo di Credi, notably by Berenson, but tentatively attributed to Francesco di Simone by Jacobsen (for bibliography see Kurz, loco cit., p. 36, note no. I). The St Francis in one of the niches corresponds with the Saint in Design B, while the St John the Baptist in the other niche corresponds with the St John in Design A.

Design D. No. 4 below. Kurz, pl, 17a. The St John the Baptist in the left hand niche is the same as the Saint in Design B. Design E. No. Orn. 615 in the Uffizi. Kurz, pl, 17b. An alternative version of the tabernacle which surmounts the altar in Design D. The same group of the <i>Pietd</i> is represented in Designs D, E and G.

Design F. No. Orn. 614 in the Uffizi. Kurz, pI. 17C. The Virgin and Child in the central niche are the same as those in the middle niche of Design D.

Design G. No. R.F. 1870: 454 in the Louvre. Kurz, pI. 18a. The design shows another alternative for the tabernacle surmounting the altar in Design D. (See also under Design E.) One of the saints standing beside the tabernacle is the same bishop, possibly St Zenobius, as stands in a niche in Design B.

Kurz discusses the connection between these seven drawings and a design for an altar at Chatsworth (Kurz, pl, 17d). The St John the Baptist in this drawing corresponds with the Saint as represented in Design F. Kurz maintains, nevertheless, that the Chatsworth drawing is by a better hand than the other seven, and he suggests that it may be a project for the same commission by another artist, though it must have been known to the artist who made designs A to G.

Some of the figures in these eight altar designs are also present on three sheets from a group of drawings that are believed to have formed part of a sketch-book: the so-called Verrocchio sketch-book. One is the property ofMr Philip Hofer (Kurz, pl. 18c); another is in the Louvre (Kurz, pl. 19a); and the third is at Chantilly (Kurz, pl. 19b). The drawings from the sketch-book were formerly ascribed to Verrocchio, but Morelli attributed them to Francesco di Simone, and his suggestion was endorsed, provisionally, by Pop ham and Pouncey in their account of two sheets from the series in the British Museum (Popham and Pouncey, nos. 56 and 57, pls. 54-7). They argue in favour of the attribution that there is a stylistic resemblance between these drawings and one in the National Museum at Stockholm that appears to be an original design by Francesco di Simone for his (signed) tomb of Alessandro Tartagni in S. Domenico at Bologna (illustrated in O. Siren, <i>Nationalmusei Arsbok</i>, 1944-45, p. 157). The question arises whether the altar designs may be ascribed to the same artist. Berenson, though he apparently did not have the advantage of knowing that there was a thematic connection between the drawings, yet thought they were certainly by the same hand. Kurz, on the other hand, considered the sketch-book drawings to be inferior in quality to the altar designs and suggested that they were copies by another artist. This is perhaps rather a hard verdict on the quality of the sketch-book drawings. Popham and Pouncey considered them to be 'the work of a Verrocchiesque sculptor of Francesco's quality'. The same might be said of the altar designs; in character as well as in subject matter they resemble the sketch-book drawings closely enough to justify a tentative attribution to Francesco di Simone. The designs in the Uffizi and the Louvre, which have been more discussed in print than ours, have been attributed to him by various scholars in the past, and so has no. 4 below.

Kurz gives a bibliography for each of the Louvre and Uffizi sheets and summarises the other attributions that have been suggested.

Dr Dalli Regoli, in the most recent discussion of the drawings in print, has discovered resemblances (not all of them very significant) between the drawings A to F and works by Lorenzo di Credi. She claims that the drawing C is definitely by Credi (as it was usually held to be in the past), and she surmises that the other designs were probably made in Verrocchio's studio after Credi had inherited it on the master's death. She suggests that the design for a tomb in our museum (no. 18), attributed to Verrocchio, may be another product of the same studio at that time. This is a reasonable theory, but it can hardly be regarded as proved yet.

Pen and ink and watercolour 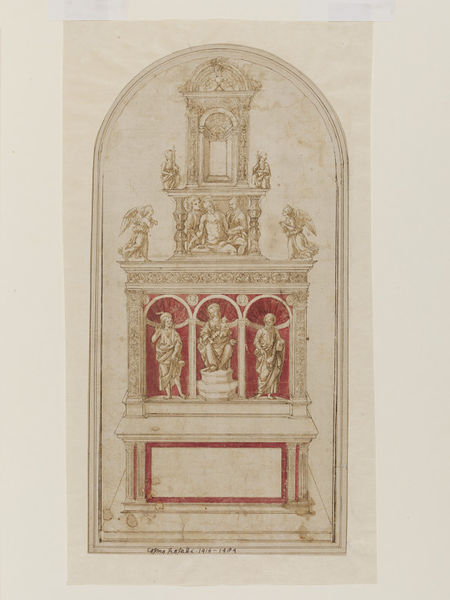