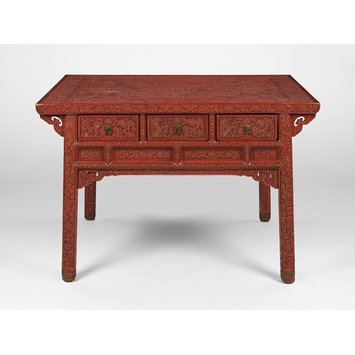 This table is arguably the most important piece of Chinese lacquer furniture. It was made during the reign period (1425-1436) of the Xuande emperor in a workshop in Beijing under direct imperial control. It is unique because no other carved lacquer furniture of this size from the early 15th century has survived - not even in the Palace Museum in Beijing. The workmanship is superb. There is no similar object in existence, probably because it was too labour-intensive even for the court to mass produce.

Lacquer is the sap of a tree (Rhus vernicifera) that grows in East Asia. It was tapped, filtered and mixed with cinnabar to produce a red colour. The lacquer worker would have applied one coat of lacquer to the wooden core of this table and added another when the previous one had dried completely. Once a sufficient thickness was achieved the lacquer worker could start carving. In this case it is reckoned that 100 coats of lacquer had been built up in order to carve the dense design of dragons, phoenixes and flowers. The drying process could not be hurried. Allowing one day for one coat to dry, which is the minimum, the drying process alone would have taken at least 100 days.

CONSTRUCTION:
A rectangular table set on four slightly splayed legs of square section rounded on the outer surface. The top presumably of mitered frame and floating panel construction, since one major crack in the lacquer of the top runs parallel to the long edge of the top, reflecting a join between two sections of floating panel, or a join between floating panel and frame. There are three transverse runners under the top.

Mitered, mortised and tenoned horizontal and vertical members joined to the insides of the legs and the undersides of the top frame form frames for two layers of recessed floating panels at the rear and side. The rear shows three panels in the upper layer and four in the lower, while the sides show three panels in both upper and lower layers. On the front, the three floating panels in the upper layer form the fronts of three drawers, which run on two transverse drawer runners. There are four panels in the lower layer on the front.

DECORATION:
The decoration executed in carved red lacquer on a ground originally yellow, now faded to stuff, with black guide-lines visible in the depths of the carvings. The legs are decorated with peonies, chrysanthemum and prunus, as are the lower layers of recessed floating panels on the front, sides and rear, and the outer edge of the top frame. The aprons are carved with stylized foliage, as are the corner spandrels.

The horizontal members between the legs are carved with bands of 'ruyi' heads containing stylized lotuses, the vertical members being carved with more naturalistic lotuses. The upper layer of floating panels on sides rear are also decorated with such lotuses. All the floating panels, including the drawer fronts, are framed by a band of squared scrolling. The drawer fronts are decorated with a rising dragon and descending phoenix against a ground of lotuses and foliage.

The top carries an outer band of striding dragons and phoenixes against lotuses. A central lobed panel contains a single rising dragon and descending phoenix against lotuses, while the four corners between the lobed panel and the outer border are carved with simpler phoenixes against prunus, peony and chrysanthemum. The underside of the table is lacquered black, while the drawers are lacquered red inside, and black outside.

MARK:
The six character mark 'Da Ming Xuande nianzhi' is cut with a knife into the black lacquer on the inside of the rear horizontal member which separates the two layers of recessed floating panels. Slight traces of gold lacquer or gold leaf remain about the characters.

The Xuande mark and quality of the table suggest that it was produced in the imperial workshops in Beijing. It was purchased by Fritz Low-Beer in the 1920s and acquired by the V&A Museum in 1973. 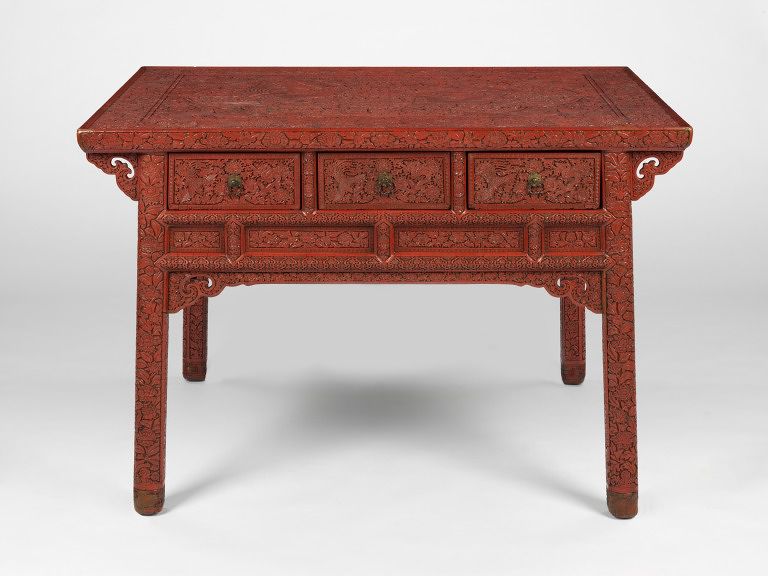