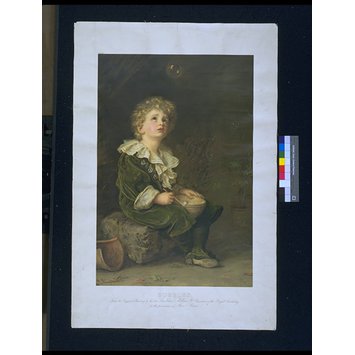 This is a presentation plate of a reproduction of a painting of his grandson by Sir John Everett Millais (1829–1896). Thomas J. Barratt (1842-1914) of A. & F. Pears bought the painting by Millais in 1886. He then reproduced it as a print, which became known as ‘Bubbles’. Barratt devised a series of expensive and original publicity schemes for Pears, the most famous of which was the adaptation of this painting as an advertisement for Pears Soap, with the addition of a bar of Pears Soap in the lower right corner. He also promoted art through the pages of Pears Annual (published 1890-1921, and price six pence until 1915). Presentation plates such as this one were given away as a separate package with the Pears Annual. 'Artistic’ advertising such as this appeared in the UK in the 1880s initially characterised by the use of reproductions of works of art. T. J. Barratt was particularly keen to use the work of Royal Academicians, in order to add kudos and respectability to his product and so target middle-income customers.

'BUBBLES. / From the Original Painting by the late Sir John E. Millais Bt. President of the Royal Academy / in the possession of Messrs. Pears.'
Lettered in the margin below the image

The original painting was entitlerd 'A Child's World' and the model was Sir John Everett Millais' grandson.

(Information from Terry Parker, a collector/dealer and expert on Pears advertising, via Archivist at Unilever). "'Bubbles' was exhibited at Tooth & Sons Gallery, 5 and 6 Haymarket, London, Spring 1886 no. 118. Sir Ingram, head of the Illustrated London News bought it from there to reproduce as one of four presentation plates given away with the Illustrated London News, Christmas 1886.

Thomas Barrat saw the painting in his office and immediately decided to buy it. Ingram agreed as long as they could still reproduce it in ILN Christmas edition 1886, which obviously pre-dates A&F Pears presentation prints given away with the 1897 Annual. (The ILN version is smaller I believe and inferior print quality). Terry has come across one earlier A&F print which may have been a trial run, dated 1894. All of these were without the soap bar. The image was so successful that it was later used in dozens of different formats from postcards and showcards to billboard posters, with the addition of the bar of soap and A&F Pear logo."

Millais' paintings of children were some of the most reproduced images of the 19th century. A. & F. Pears produced this print to advertise soap. The fact that both subject matter and artist were popular with middle class viewers lent kudos and respectability to the product [] 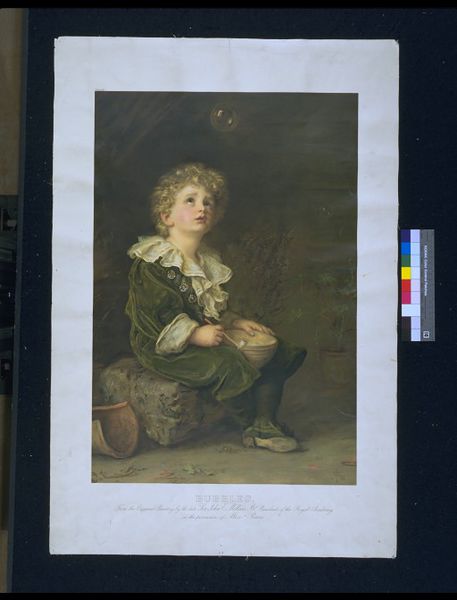