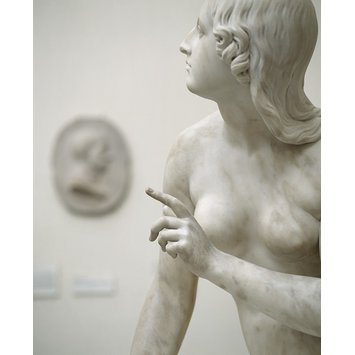 Eve listening to the voice

This figure depicts Eve listening to the voice of Adam (previously described as Eve listening to Satan) in the Garden of Eden, a subject inspired by Book IV of John Milton's religious epic poem Paradise Lost (1667). Edward Hodges Baily's 1842 marble follows from his earlier illustration from Milton, Eve at the Fountain (plaster model from about 1818, marble 1821) which earned him full membership of the Royal Academy and was one of the most famous British sculptures at the time.

Having been absorbed in her own reflection, Eve turns to Adam to describe: 'As I bent down to look, just opposite/ A Shape within the watery gleam appeared,/ Bending to look on me. I started back, /It started back but/Pleased it returned as soon with answering looks/ Of sympathy and love.' Adam in turn tells her ‘What thou seest,/ What there thou seest, fair creature, is thyself’.

Baily’s Eve at the Fountain (a version of which, signed and dated 1822, is in the Bristol City Art Gallery; the plaster in the V&A collections, Museum no. A.3-2000) is inspired, in composition and neoclassical style, by a celebrated classical sculpture, the Nymph with a shell (Paris, Musée du Louvre). A second century CE Roman copy from a Greek original from the second century BCE, it was much admired from the 17th century onwards, and reproduced in marble and plaster. Eve Listening to the Voice largely reproduces Baily’s early composition, but for the position of the head and left hand. In the former version, Eve is looking down, absorbed by her own reflection. In the later version, she looks up and raises her hand, in gestures expressive of the act of listening and talking.

In a lecture delivered at the Royal Academy of Arts, London, the sculptor Henry Weekes commented that Baily, 'an earnest pupil of Flaxman, was a more finished modeller than his master, though with less feeling and sentiment, and less power in design. What he gained by the means I have alluded to, was knowledge, not genius, and it carried him a great way: the latter, even his great teacher could not impart to him, though he obtained under his tuition much that we may designate as purity of style and taste. You may think it strange in me if I say that, notwithstanding he produced one of the most beautiful examples of English ideal Sculpture as yet known to us - his Eve - he was wanting in genius!' This figure was also reproduced in Parian ware (a granular porcelain), and Baily also made busts taken from this model.

Edward Hodges Baily (1788-1867) was British sculptor and designer. As son of a ship’s carver he began his career as a modeller in wax. He spent seven years in John Flaxman’s studio, acknowledged as his favourite and most devoted pupil. He attended the Royal Academy Schools. He is the sculptor of the Nelson on Nelson's Column, of about half the sculpture for Marble Arch, some of the exterior work on Buckingham Palace, and a number of monuments in St Paul's and Westminster Abbey, just to name a few. The work that brought him fame was Eve at the Fountain first shown in 1818 at the Royal Academy.

Eve, as a naked female figure, is shown seated, her body partly resting on her right arm. Tilting her body to the right, she lifts and turns her head, her left arm raised in the air. Her inclined head, lightly parted lips and raised eyes are all expressive of the act of listening. The piece is signed and dated on the integral base at the back of the figure.

Given by Wynn Ellis Esq. in 1875. Transferred on loan from the Department of Architecture and Scultpure to Bethnal Green Museum in 1928; returned to the Schulpture Department in 1987. 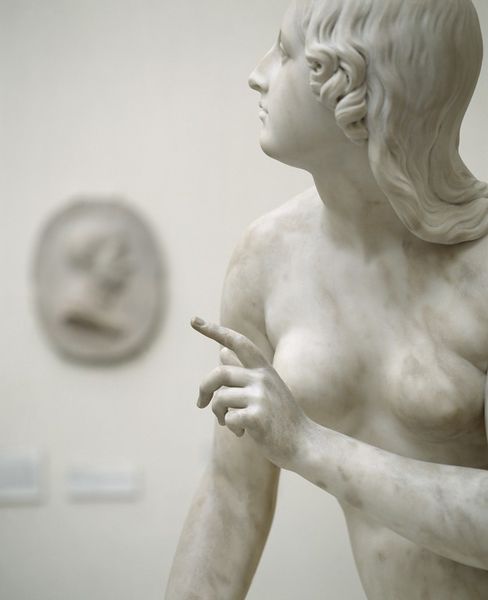