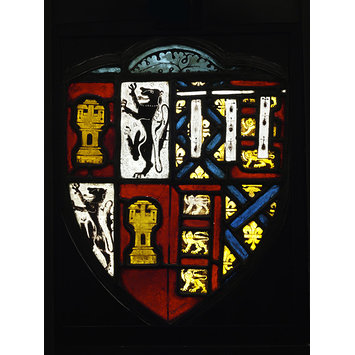 Coats of arms featured increasingly in windows in the 14th century and were used to advertise political and personal allegiances. This shield combines the royal arms of England (three lions walking with their heads turned towards the observer) with those of France ancient (a field of fleurs-de-lis). This heraldic union, embellished with a label of three points ermine in the upper right-hand quarter, identifies the arms as those of John of Gaunt (1340-99), Duke of Lancaster and third son of Edward III.

In 1371 John of Gaunt married Constance, daughter and co-heiress of Peter I, King of Castile and Leon. In 1372 a great council in England recognised his right to the crown of Leon/Castile and granted him the right to bear these arms. John of Gaunt's arms are impaled with those of Castile (castles) and Leon (lions).

The complex political allegiances represented in this stained-glass panel required equally intricate painting and leadwork. Close examination reveals that no attempt was made to cut the glass round such details as the gold lions. Instead their outlines were painted in black enamel on roughly shaped pieces of yellow glass with the spaces between the legs blacked out.

This panel was possibly acquired from Strawberry Hill (Twickenham, Middlesex), home of Horace Walpole (1717-1797). Walpole, who pioneered England's 18th-century Gothic revival, transformed the property into a pseudo-Gothic 'castle' in which to hoard his celebrated collection of antiquities, prints and curiosities. His particular interest in heraldry was reflected in the Medieval stained glass with which he decorated his residence.

Shield. Castile and Leon quarterly, impaling France and England quarterly. Arms of John of Gaunt as claimant to the Kingdom of Castile and Leon.
Quarterly, 1 and 4, gules, castle or (for Castile); 2 and 3, argent, lion rampant sable (for Leon). Impaling quarterly, 1 and 4, azure, semy-de-lys or (for France); 2 and 3, gules, 3 lions passant guardant in pale or (for England).
The English arms also bear a mark of cadency to indicate a son of the king - a label of three points ermine. This was the cadency mark as borne by John of Gaunt.

From the Strawberry Hill collection.
Note in Register: Castile and Leon quarterly impaling France and England quarterly, a label of 3 points ermine. Arms of John of Gaunt, Duke of Lancaster, as claimant (1372-88) to the throne of Castle and Leon. He died 1399. (N.B. They exemplify also his daughter, Catherine of Lancaster, consort, 1393, of Henry III of Castile and Leon. She died in 1418.)

Historical significance: The conflicts between England and France in the 14th and 15th centuries (The Hundred Years Wars) led to an increase in the number of coats of arms being adopted as many men in England were granted the right to assume arms before engaging in conflicts across the Channel or were allowed to adopt them later as a reward for their heroics on the battlefield.

John of Gaunt was the third son of King Edward III and Queen Philippa. He was born in Ghent, hence his name 'of Gaunt'.
Edward III laid claim to the throne of France in 1328 by right of his mother Isabella, daughter of King Philip IV of France, and by 1340 had quartered the French arms with that of England.
John of Gaunt became a wealthy and powerful landowner after his marriage to Blanche, heiress to the lands of Lancaster, in 1359. Blanche died in 1369 and in 1371 Gaunt remarried to Constance, co-heiress to the Kingdom of Leon and Castile.
Early in 1372, Edward III and a Great Council recognised Gaunt's right to bear the arms of the Kingdom of Leon and Castile (by right of his wife). The crown was disputed and Gaunt was never able to realise his ambitions to actually possess the throne. In 1388 he relinguished his claim in exchange for a substantial sum of money and an annual pension.

Panel of clear, coloured and flashed glass with painted detail, depicting the arms of John of Gaunt as heir to the throne of Leon and Castile. English, about 1376 to 1388.

British Galleries:
Walpole was one of the first people to collect stained glass. He paid an Italian named Asciotti to collect 450 pieces for him in Flanders (an area covering parts of northern France, Belgium and the Netherlands). He also collected old English glass. Walpole had the glass fitted into the Gothic windows at Strawberry Hill to help create an effect he described as 'gloomth'. In 1753, he wrote to Horace Mann 'the adjusting and disposing [of] it is vast amusement'. [27/03/2003] 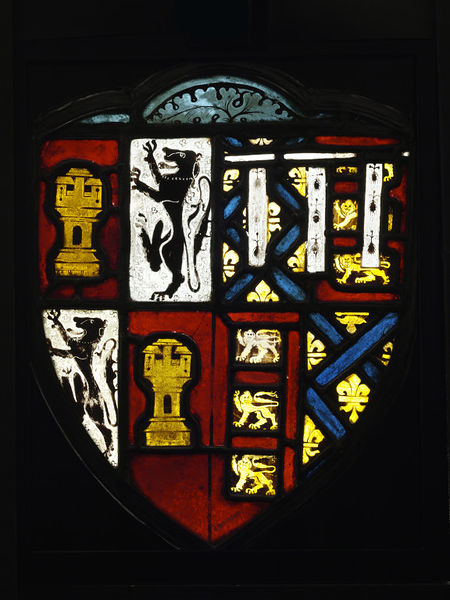