If you would like a larger file, or to use the image in other ways, contact our Licensing team.
BETA
+1
BETA
On display at V&A South Kensington
Request to view at the Prints & Drawings Study Room, level F , Case X, Shelf 354, Box C

This is the only photograph in Turner's album to include a human figure, seen here leaning against a fence and a pollarded oak tree. The figure may be Turner himself. Turner's decision to exclude figures from the majority of the rural views he made for exhibition was deliberate, but it was a departure from the established tradition. Figures in contemporary dress would have made Turner's photographs historically specific; without figures they have a timeless quality. 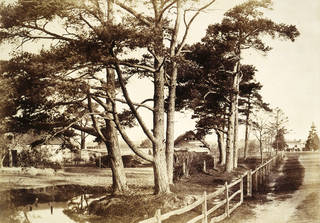