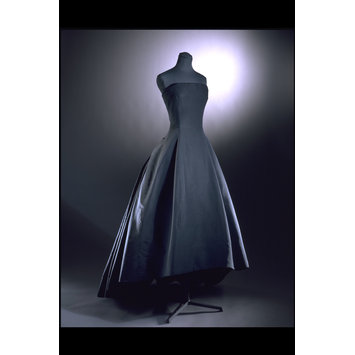 This silk evening dress is one of Christian Dior's Y line designs from autumn/winter 1955. The strapless 'princess' style gown is a sculptural masterpiece. Haute couture designers enjoyed making two dresses in one. Here the front skirt is short, reaching lower calf level. At the back the skirt is long and forms an impressive train that sweeps the floor. The designer has used stiffening bands inside the neck and hem to keep the shape of the dress. The dress fastens with a zip at the back.

The dress was ordered from the Dior Paris salon by prima ballerina Margot Fonteyn, a long-standing client of Dior.

Evening dress of black silk faille. The dress has a strapless fitted bodice and a full bouffant skirt, which is longer at the back. It fastens with a back zip and there is an attached black faille tie at the waist. The inner bodice is boned and there are several petticoats of black net.

Prima Ballerina Dame Margot Fonteyn was a devoted client of Christian Dior’s throughout the 1950s. In 1955, she chose a grey silk Dior dress for her wedding to Roberto de Arias, the Panamanian ambassador to London.

Worn by the donor, with a matching fringed stole (not given to the V&A). Fonteyn is photographed wearing the dress backstage and onstage at a curtain call alongside Frank Tait at the Empire Theatre in Sydney, Australia on the 25th May 1957 (photographs in the Australia Photographic Agency Collection at the State Library, New South Wales call no. APA 03359 and 03361).

The original design was modelled by the Dior house mannequin Renée, and the Atelier was premiered by Hélène. The sketch on the charts at the Dior Archive, Paris, show the dress to have a very full bell-shaped skirt with the skirt supported to a flemenco shape.

Dame Margot Fonteyn, (born Surrey, 1919-1991), Prima Ballerina Assoluta of the Royal Ballet. Through the 1960s and 1970s, Fonteyn performed regularly with Soviet-born dancer Rudolf Nureyev during his tenure with the Royal Ballet.

Hardy Amies wrote of Dior, 'He has a sure eye that respects the shape of a woman's body, given her by nature and a well-fitted corset. He has a firm hand, to carve the clear outline of his clothes. He has a sharp intelligence which restrains his details to the point of starkness.' 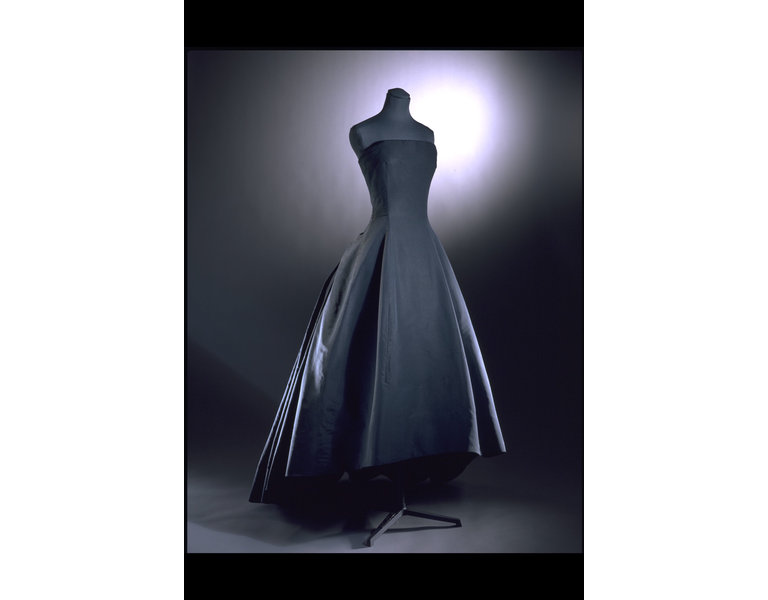