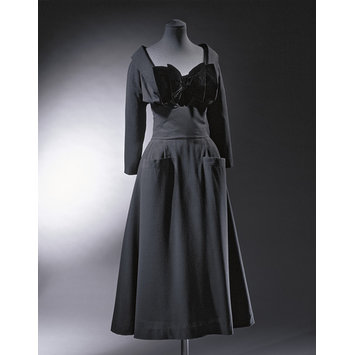 Maxim's dress with choker and hat

The spring 1947 collection of Christian Dior (1905-1957) caused a sensation and was christened 'The New Look' by Carmel Snow of Harper's Bazaar. Dior offered the glamour and romance of full skirts and nipped-in waists to women who were tired of utilitarian clothes with boxy silhouettes, mannish square shoulders and practical short skirts. This intricately cut afternoon dress of black wool, named 'Maxim's', was worn with a black tulle cartwheel hat, long black gloves and simple black court shoes. To emphasise the bust, a large silk velvet bow was set into the low, square neckline and the waist was compressed by a cummerbund-style lower bodice. A heavy ribbed silk petticoat supports and defines the skirt. The dress fastens with a zip down the back .

In the notebook of the Dior Archive, the dress is referred to as a 'Restaurant Dress'.

THE NEW LOOK panel text from The Golden Age of Couture: Paris and London 1947-1957

"Dior launched his new house on 12 February 1947 and became an overnight sensation. His voluptuous collection was the antithesis of lean, boxy wartime fashions. Instead, feminine designs featured rounded shoulders, a womanly bust and a hand-span waist above enormous skirts. It was christened on the spot by Carmel Snow, editor of American Harper’s Bazaar, as the ‘New Look’.

The amount of fabric required to create a New Look garment – typically 15 metres in a woollen day dress, 25 metres in a short taffeta evening gown – caused outrage, for rationing was still in place. The collection was shown in secret to Princess Margaret at the French Embassy in London. But despite attempts by the Board of Trade to suppress it, the New Look was unstoppable."

“Evangeline (Bruce) performed her job with such panache and aplomb that she became the country’s standard bearer as far as diplomacy went. … She had become the State Department’s last word on good taste” writes C. David Heymann in The Georgetown Ladies’ Social Club: Power, Passion, and Politics in the Nation's Capital (Atria Books: 2004)

Named after the fashionable Parisian café Maxim’s, this dress featured in British Vogue’s first coverage of Christian Dior. In 1961, designer Marc Bohan was similarly inspired when he named a black sequined dress in his Autumn/Winter collection for Dior, Maxim’s.

The sheen of the vast bow is set against the matt surface of creped wool. This dress and the suit 'Bar' were the two outfits which epitomised Dior's New Look and were much featured in the fashion press of spring and summer 1947. The natural female curves are exaggerated - the bust is emphasised by the large set-in bow, the waist is drawn in tight by a cummerbund-style lower bodice and the hips are rounded out by inner stiff net frills and outer unpressed triple pleats falling into stand-away pockets. The back skirt is given fullness by a pair of large inverted pleats and Dior was to elaborate on this back theme in his 1948 Envol and Zig Zag collections.

According to French Vogue (May-June 1947) this is a luncheon dress but the low, almost off-the-shoulder square-neckline (secured inside by a cased elastic drawstring) suggests cocktails. The intricately cut garment depends on a boned foundation and a stiff grosgrain petticoat. It back fastens with zips and self-covered buttons. 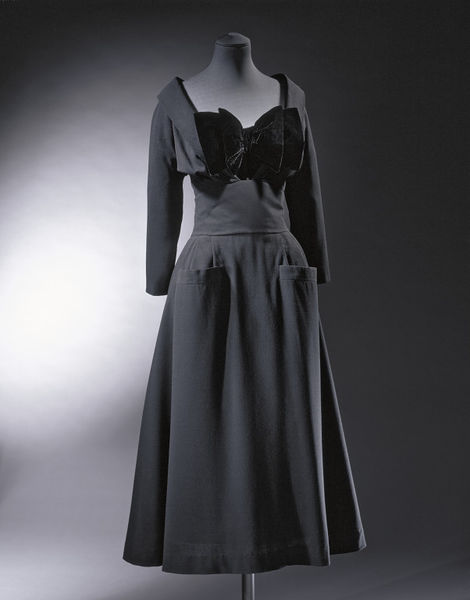