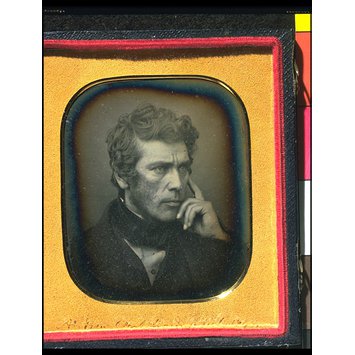 This is an excellent example of the Daguerreotype portrait, which startled and delighted the public in Europe and the United States in the 1840s and early 1850s. Claudet was one of the pioneers of the process: he found an 'accelerating agent' (bromine and chloride of iodine) which speeded up exposures considerably. The sitter, Andrewe Pritchard, was probably a business associate of Claudet's. Pritchard was also an inventor and the proprietor of an emporium selling scientific instruments in Ludgate Circus, London. He was famous for making jewel lenses. Claudet's portrait shows the scientific inventor as a romantic modern figure.

Bust portrait of Andrew Pritchard facing right with his hand to his face.

Claudet was a student of Daguerre, and was among the first to open a photographic portrait studio in London. Though praised for their sharp and minute detail, daguerreotypes were criticised by many for making sitters appear ashen and deathly due to their grey tones. To combat this, some portraits were coloured by hand for a more life-like effect.

The Royal Photographic Society Collection at the V&A, acquired with the generous assistance of the Heritage Lottery Fund and Art Fund []
Gallery 100, ‘History of photography’, 2011-2012, label text :

Photographic advances in the 1840s contributed
to the decline in the popularity of painted portrait
miniatures. Claudet was among the first to open a
photographic portrait studio in London, using the
daguerreotype process. The sitter is the English
optician and inventor Andrew Pritchard (1804–82),
who made lenses for Claudet and exhibited his
inventions at the Great Exhibition of 1851. 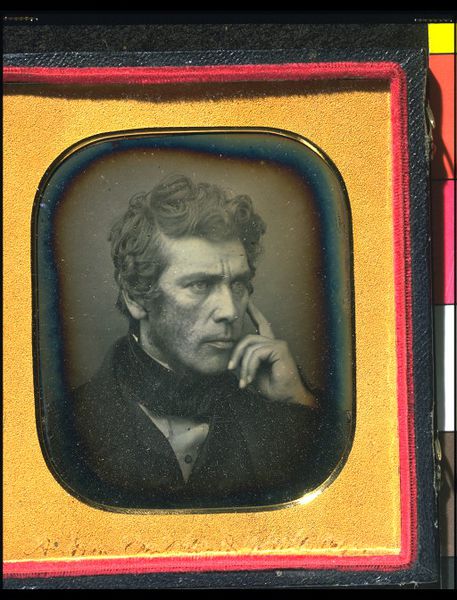