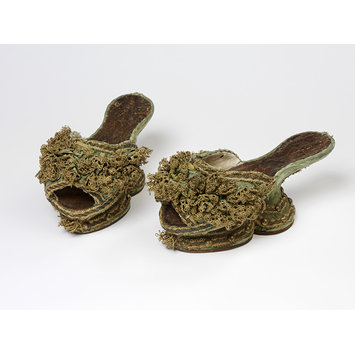 Shoes of this type are called chopines or pantobles in England. These 'platform-soled' shoes are well documented as a Venetian fashion that spread to the rest of Italy and Europe by the early seventeenth century. Some chopines were worn as overshoes outdoors, while others, like this pair were intended for indoor use, worn with stockings alone. The chopines are 'straight' in shape, having no difference between the left and right shoes.

An elegant example of the most fashionable style of women's footwear, this pair of chopines is made of wood covered with silk velvet and trimmed with silk ribbon and silver-gilt bobbin lace, and a woven silver-gilt lace. The upper is divided with holes for lacing. This suggests that the silver-gilt bobbin lace which covers that area may have been added slightly later. However, the lace was made at about the same time as the shoes, in the late 1500s or early 1600s. In 1591 Elizabeth I had made for her two pairs of pantobles open at the toes and 'laid on with silver lace'.

Numerous early 17th century Italian paintings depict women with very long skirts, often a sign that they are wearing chopines, although they cannot be seen. This meant that their gowns and petticoats needed additional fabric to give the extra length required. The chopines not only reflected the wearer's high status in society by increasing her height, they also demonstrated her wealth.

This pair of shoes are slippers with a 'platform' sole; the style is variously called mule, chopine, pantoble or pianella, terms that refer to the fact that the shoe is backless and its leather sole is built up into a wedge. The upper is divided into two parts and has holes for lacing on each side to allow them to be laced together. This suggests that the gold lace which covers that area may have been added slightly later. However, the lace was made at about the same time as the shoes, in the late 1500s or early 1600s.

Historical significance: A number of chopines survive in museum collections, most are attributed to Italy. They represent one of the most impractical fashions of their day, as this pair demonstrates.

The style
This style developed in the late 15th century (Beatrice d'Este wears a pair in her effigy from 1497) and was especially popular among Venetian women. The chopines/ pantobles/ pianella, were originally a type of overshoe, which is why they have no back. People wore later versions either as overshoes or on their own. They could reach uncomfortable heights and the style may have derived from the Turkish bath shoe which kept the wearer out of the water. The extreme heights seems to have been confined to Italy and possibly Spain, and might have indicated women involved in the sex trade (Shoes: A History from Sandals to Sneakers, ed. G Riello & P McNeil. Oxford & New York: Berg, 2006). Chopines were the subject of satire and of moral censure by the church.

Function
The high-platformed shoes had both a practical and symbolic function. The thick-soled, raised shoe was designed to protect the foot from irregularly paved and wet or muddy streets. They also enhanced the wearer's stature, introducing awkwardness and instability into a woman's gait. The wearer was generally accompanied by an attendant on whom she could balance. 16th-century accounts suggest that the chopine's height was associated with the level of nobility and grandeur of the Venetian women who wore them, although, in the past historians have suggested that they were the attire of courtesans. The famous painting of Two Venetian ladies by Vittore Carpaccio (in the Museo Correr, Venice) shows a pair of red chopines. The Torella coat-of-arms present in the painting probably means that the ladies were members of that family, and not prostitutes, although the art critic John Ruskin gave it the title 'The Courtesans' in the nineteenth century (Web Gallery of Art: http://www.wga.hu/frames-e.html?//html/c/carpacci/5/01ladies.html ).

The elaborate dress of respectable Venetian noblewomen was almost indistinguishable from the costume of successful courtesans. So vexing was the confusion that sumptuary restrictions attempted to define the differences and at one point prohibited courtesans from wearing silk dresses and virtually all jewellery (Koda, Harold: "The Chopine", in Timeline of Art History, New York, The Metropolitan Museum of Art, 2000: http://www.metmuseum.org/toah/hd/chop/hd_chop.htm ).

The fashion of chopines spread outside Venice, to Italy, France, Spain and England, but was never as common there, although Lady Falkland (1585-1639) mentions in her memoirs wearing chopines to increase her height. In 1591 Elizabeth I had made for her two pairs of pantobles open at the toes and 'laid on with silver lace', which may be similar to this V&A pair (Arnold, Janet: Queen Elizabeth's Wardrobe Unlock'd, London: Maney publishing, 1988, pp.214-215).

Originally a form of backless overshoe, pianelle were sometimes worn alone. No distinction was made between the left and the right foot in the shape of the shoe. Although these shoes have a small platform, they are low compared to the extremely high ones fashionable in Venice at the time. Women sometimes included shoes in their trousseaus. [57 words] 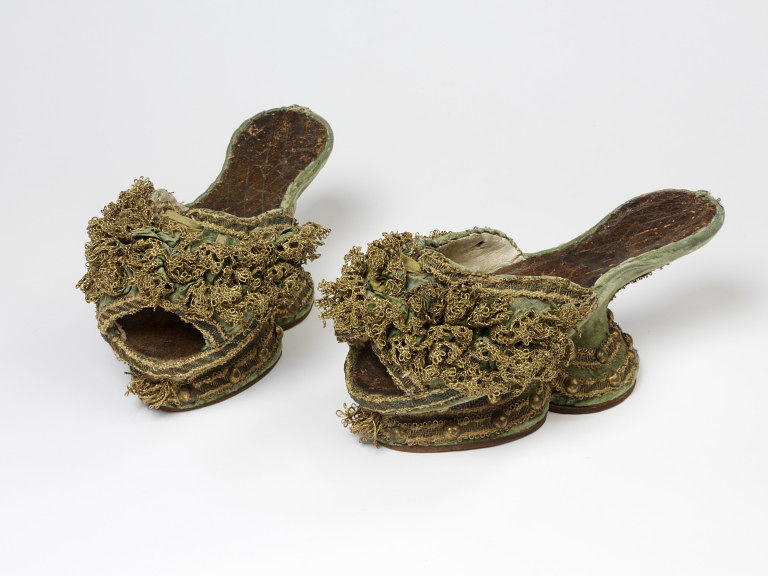