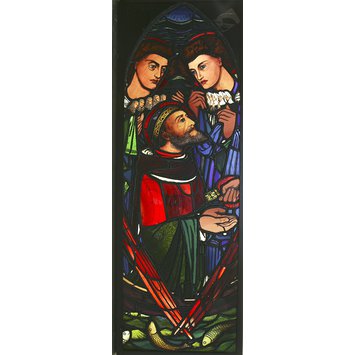 This panel would have occupied the top of a lancet (a narrow pointed window). It depicts St Peter kneeling in a boat with fish swimming in the bottom foreground. Behind him stand two angels. One holds five small figures of armoured knights, the other of nuns. St Peter holds out his hands, and on the right we see a hand presenting two keys to him. Surrounding the hands is a halo bearing the words ‘Dabo tibi’, which refers to the Gospel account of Jesus Christ giving the keys of heaven to Peter.

Peter was originally a fisherman called Simon. He and his brother Andrew were fishing on the Sea of Galilee when Jesus called them to become his disciples. Simon became known as ‘Peter’ when Christ chose him to be the rock (Latin: petra) on which he would build his church, giving him the keys. Although the imagery in the panel relates to these events, we do not know why the two angels hold small figures of knights and nuns. This might be relevant to the place for which the panel was made, but sadly this is unknown.

In 1857 Burne-Jones began a brief contract with the glass-making firm of J. Powells & Sons in London to supply them with designs for stained glass. He was to be paid a flat fee for this work. Powells would retain the right to reproduce his designs as often as they wished. The design for this panel was part of their stock.

Lancet-shaped panel depicting the half-length figure of Saint Peter sinking in the water (whilst kneeling in a boat). His open, upturned hands receive a key from a hand appearing from the right inscribed 'Dabo Tibi'. Above him, two angles facing each other hold respectively five nuns and five knights in armour. At the apex of the lancet is the word 'Tiberias'. The angels' wings enfold Saint Peter, whose name, 'Sanctus Petreus', is inscribed on his halo. At the base, fishes swim in the waves. The following colours are used: green, red, yellow, turquoise, purple, a flesh colour and white.

This panel formed a pair with Saint Paul, now apparently lost. The alternative titles have been given to the panel by different writers, primarilly Vallance (1900) who referred to 'The Call of St Peter' and Sewter (1974) who prefers 'St Peter Sinking in the Sea of Tiberias'. The cartoon for the Saint Peter panel was formerly in the collection of Powell and Sons and was sold at the same sale as this panel (Sotheby's Belgravia, lots 33 and 34, 23 March 1976). Ultimately, nothing specific is known of the circumstances of design and manufacture.

This panel would have occupied the top of a lancet (narrow and pointed) window. It depicts St. Peter kneeling in a boat on a body of water with fish swimming in the bottom foreground. Two angels stand behind him. One holds in his bosom five small figures of armoured knights and the other holds five small figures of nuns. St. Peter has his hands held out and you can see a hand on the right of the panel holding out two keys to him. Surrounding these hands is a halo with the words 'Dabo tibi' painted on it. This refers to Jesus Christ giving ('I give to you') the keys of heaven to St. Peter.

The imagery on this panel is not fully understood. It is not known why the two angels hold small figures of knights and nuns. It is possible that it could have relevance to the place for which it was made, sadly not known. Peter, or Simon as he was originally called, was a fisherman. He and his brother Andrew were on a boat fishing on the Sea of Galilee when Jesus Christ called to them to leave their profession and follow him ('I will make you fishers of men'). This is when they became disciples.
Simon became known as 'Peter' when Christ chose him to be the rock (petrus) on which he would build his church and gave him the keys of the kingdom of Heaven. These two events are suggested by the imagery in the panel.

Burne-Jones had been introduced to the glass-making firm of J. Powells and Sons in London by his fellow artist, Dante Gabriel Rossetti. In 1857, Burne-Jones began a brief contract with Powells to supply them with designs for stained glass. He was to be paid a flat fee for producing the designs and then Powells would retain the right to reproduce the design as often as they wished. The design for this panel was part of Powell's stock.

Clear, coloured and flashed glass with painted details and yellow (silver) stain depicting the Calling of St. Peter. English, designed by Edward Burne-Jones and made by the firm of Powells and Sons, c.1857.

THE CALLING OF SAINT PETER

The history of this panel is not known, and its pair, a panel showing St Paul, is now lost.

Attribution note: The design would have been available for re-use and Powell's would have intended it to be a stock design.