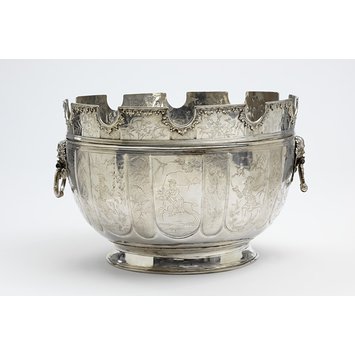 A monteith is a vessel with a notched rim, often found in ceramics or glass as well as silver. It was used to cool wine glasses by hanging them by their feet from the notched edge into iced water. Monteiths became fashionable in the last quarter of the 17th century and some examples such as this one have a detachable rim and can also be used as a punch bowl.

The design around the sides of the bowl shows a racing scene appropriate for its use as a race prize. It was won by Edward Chute at the Basingstoke Races on the date inscribed - Basingstoke Plate Octr: ye 2d:1688. Horse racing had begun under the Tudors in the first half of the sixteenth century at Chester (1511) and York (1530) but it did not become a nationwide sport until the 1680s. As racing was principally supported by the wealthy, prizes were often valuable and often consisted of silver cups and plate.

Of hemispherical form with upper removable rim with upper scalloped edge to take up to ten glasses, the lower bowl divided into ten narrow panels spaced by narrower vertical matted panels, each flat chased with an exotic plant, the large panels on one side depicting a fanciful version of the race. The panels show:
A herald sounding the start and a boy running after the race
An enthusiast also running
A horse and jockey
A posturing figure holding the finish flag with an excited boy at his side
An attendant offering the winning prize in the form of the monteith
On the other side, extravagant figures flank the inscription 'Basingstoke plate Octr:ye 2d: 1688'; applied with two bail handles held in the mouth of an old man mounted on a partly pierced cartouche with pendant drapery, moulded lip and spreading rim foot, the detachable notched rim flat-chased to complete the design of the body with exotic birds and plants divided by matted panels.

RC in dotted circle; l; leopard's head crowned; lion passant
Basingstoke Plate 2 Octr:ye 2d:1688
Makers mark for Robert Cooper; date letter l for 1688-9;London hallmark; sterling mark
The bowl bears the maker's mark, date letter, London hallmark and sterling mark on the underside of the base; the rim is not marked.
The inscription 'Basingstoke Plate 2 Octr:ye 2d:1688' is in a panel on the front of the monteith

This monteith was won by Edward Chute at the Basingstoke Races on the date inscribed - October 2nd,1688. Edward Chute's racing interest and his prize, the monteith, are recorded in A history of the Vyne published 1888, p.83: "He kept racehorses at the Vyne, and in the year of the Revolution won a handsome silver punch bowl at the Basingstoke Races, then run on the downs west of the town. This bowl, which is preserved at the Vyne, is nine inches in height and twelve in diameter and is richly chased with figures of Oriental character engaged in various field sports; it is surmounted with a crenellated rim and bears the date Oct:ye2nd 1688". The bowl is also recorded as "a very handsome silver punch-bowl...preserved at the Vyne" in a history of Basingstoke published in 1889. A photograph of the dining-room showing the monteith in the center of the dining table was published in the The Architecture Review October 1911, p174, fig.11.
Sold at the Jerome Ortiz-Patiño Collection sale, Sotheby's New York, Thursday May 21, 1992.

The Vyne, near Basingstoke, Hampshire, now a National Trust property, is a fine house built in the early 16th century by William Sandys, later Lord Sandys of The Vyne, who was Henry VIII's Lord Chamberlain.

During the Civil War the house was a Parlimentarian stronghold. However, that struggle reduced the family's fortune considerably and the 6th Lord Sandys was forced to sell the house in 1653 and retreat to his other home at Mottisfont Abbey.

The Vyne was bought by Chaloner Chute a wealthy barrister who later became a Member of Parliament and Speaker of the House. He carried out various alterations to the house before his death in 1659. His grandson, Edward Chute (1658-1722) married in 1686 Katherine, daughter of Sir Anthony Keck, Commissioner of the Great Seal, and widow of Ferdinand Tracy. He was High Sheriff of Hampshire in 1699 and known as a staunch supporter of the House of Hanover.

This early race prize, won by Edward Chute at Basingstoke Races on 2 October 1688, is flat chased with fashionable 'Japan' or chinoiseries motifs and a Chinese figure presenting the monteith. The jockey spurring on his horse towards the final flag wears the contemporary dress and the chaser probably followed an etching by Francis Barlow of a race meeting at Windsor in 1684.

The monteith, a novelty vessel for cooling glasses in ice, first appeared in about 1680. Lord Dartmouth, as Master of the Horse, chose from the Jewel House in 1685 'one mountet, a silver vessel for Glasses'. Cheaper versions were made in pewter and tin-glazed earthenware. The rim of the monteith, scalloped to hold the feet of the wine glasses, can be taken off and the bolw adopted for mixing punch, another Restoration innovation.
M25:1&2-2002 [2002] 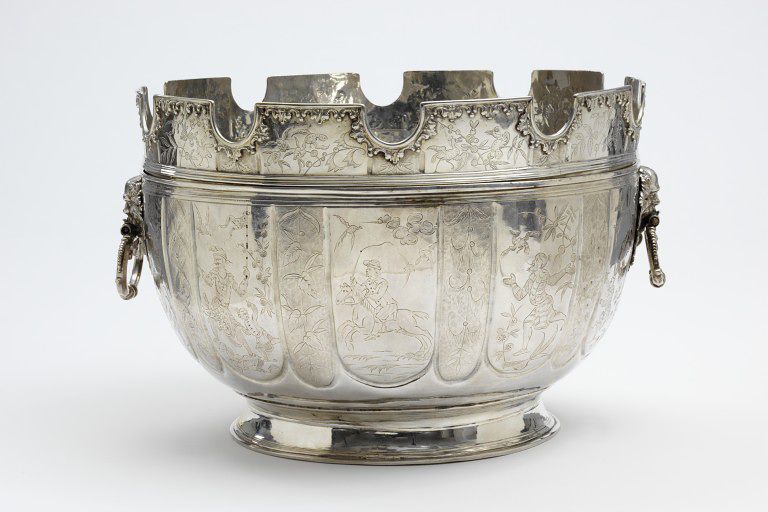