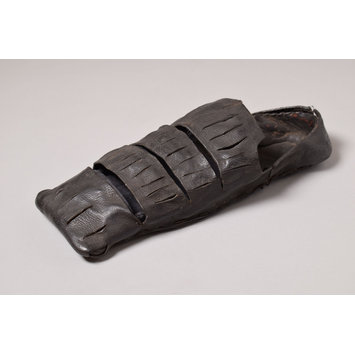 This is a man's leather shoe has a broad, square 'horned' toe. This style was fashionable during the reign from 1509-1547 of Henry VIII . It was a complete change from the very pointed toe favoured at the end of the 15th century. The wide shoes echoed the line of fashionable dress for men, who wore doublets (jackets) with broad padded shoulders. The slashed decoration made the leather more flexible and therefore more comfortable to wear. The shoe originally had bright coloured linings which could also be glimpsed through the slashes.The linings have not survived. The shoe described is the one you can see on the left.

Left shoe of leather with horned or eared toe, possibly for a man. The vamp is decorated with three vertical slits in the centre and with three slanted horizontal slashes on each side. The shoe has lost is outer sole and welt, but still has its heel-stiffener which is an extra piece of leather reinforcing the back quarters. There is no seam at centre back; the quarters are in one piece with seams at each side. It is possible that the shoe was once edged with a leather strip around the back opening. The toe area of the shoe is reinforced by an extra piece of leather, keeping the horns of the toes stiffened. There is wear and tear along the right upper at the big toe and splits at the centre back of the quarters from the sole and upward. A second thread keeps parts of shoe together.

The majority of the English Medieval and Tudor footwear was donated to the Museum by Talbot Hughes. He was a portrait painter who began to purchase costumes to use as models in his paintings. He spent 30 years building up his collection of historical English costume and footwear. He seems to have bought much from auctions but also directly from workmen on building sites.

Historical significance: Significant as an example of the shoes of this period found in rubbish dumps in the City of London, probably an everyday object rather than one for the consumption of the elite.

Compared with sizes today, the shoe corresponds to a UK adult 5-6 or a European 39.

Shape and construction
This shoe dates from the time when the toe-shape was at its widest, around 1530 to 1545. The whereabouts of the other shoe, the right shoe, is unknown (never entered the Museum). In the early 16th century, the shape of the toe changed from pointed to the broad squarish shape which was fashionable with the wealthy merchant classes. The style became much more exaggerated during the reign of Henry VIII with some soles being more than 17 cm wide. The toe could be padded with moss or hair at the sides. These extremely wide shoes, like the extremely pointed shoes of the previous century, fell under the stricture of sumptuary legislation. The wide shoes echoed the line of fashionable dress for men, who wore doublets (jackets) with broad padded shoulders. The slashing of the doublet could match the slashing of the shoes. Shoes had bright coloured linings which could be glimpsed through the slashes, or the colour of their hose did so.

At the end of the Middle Ages there was a change in construction methods to the welted shoe. The upper was henceforth attached to the insole and welt (a strip of leather between upper and sole), with a second row of stitches through the welt to attach the sole. The other change of construction was the moving of the principal upper seam to the centre back. This change produced the traditional vamp and pair of quarters.

The Trade
The London finds of medieval and Tudor shoes were made by London cordwainers, but there was also a profitable second-hand trade in old leather shoes. Most shoemakers were capable of doing repairs, but this was usually considered inferior work and left to a different type of craftsmen, such as cobblers. Guilds of cordwainers (or shoemakers) were formed in Oxford in 1131 and in London before 1160. Measurements were standardised in 1305, suggesting that shoes could be bought ready-made, as well as bespoke. As well as being made for sale in towns, shoes were also sold at the great medieval fairs.

Context for survival
A large number of leather objects was excavated in London and its neighbourhood in the early 20th century, notably at Finsbury, Moorgate and London Wall, from rubbish heaps and plague pits. They were not excavations in modern sense but largely finds made by workmen on building sites and dredges on the river. The Museum of London and Northampton Museum and Art Galleries have also a large collections, where possibly the other shoe of the pair for some the V&A's shoes might be found (see Grew, Francis & de Neergaard, Margrethe, Shoes and Pattens. Medieval Finds from Excavations in London:2 (London: Her Majesty's Stationery Office, 1988, and A History of Shoe Fashions (Northampton Museums and Art Gallery, 1975).

Shoes for the wealthy and for formal wear were made of silk or velvet. Leather shoes might have been used for more practical occasions, every day wear, travelling and so forth, although the find locations of the shoes in London and that some are similarly slashed as formal shoes suggest that these were used by lower and middle class citizens of London.

Left shoe of leather with horned toe and slashed vamp

Label for the exhibition Shoes: Pleasure and Pain

For the Tudor Man
Extremely broad-toed shoes were fashionable in the early 16th century. Some ‘duckbills’ were so wide that
the toes had to be splayed out to keep the shoes on the feet while walking. Slashes in the vamps revealed the wearer’s colourful hose underneath. Members of the court and the elite wore such footwear in satins and velvets. The trend filtered down to the middle classes, albeit in more practical leather.
Broad-toed duckbill
1520–40
London
Leather
Given by Messrs Harrods Ltd
V&A: T.412-1913 [2015-2016] 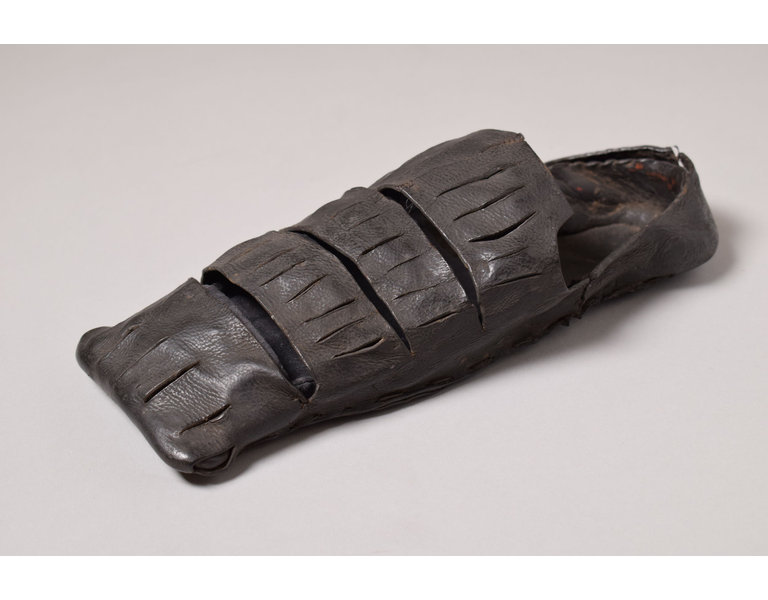