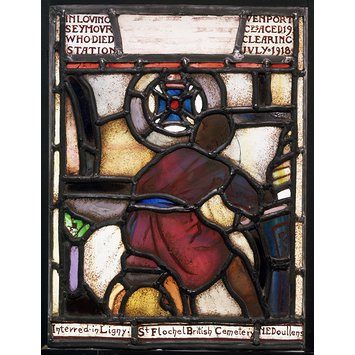 Leonard Walker (1877-1964) studied at the St. John's Wood Art School in London and began to produce stained glass in the 1890s. He used slab glass extensively in his works. This is made by blowing semi-molten glass into a rectangular bottle mould. Its uneven thickness gives a lustrous effect and many subtle colour variations. Walker exploited these qualities in the glass in the execution of his designs.

This window came from the church of St. Lawrence, Brondesbury, north London. The church was demolished in 1971 and the Church commissioners gave this window and another by Leonard Walker (Museum number: C.1-1973) to the Victoria & Albert Museum. Unfortunately, no records survive so we can only guess as to the subject of the window. It depicts a male figure with raised hands.

This window is a memorial to Harry Davenport Seymour who died, aged 19, in the First World War (1914-18). It is possible that Walker borrowed the imagery of the Resurrected Christ to indicate the man’s soul rising to heaven.

Of lancet shape with cusped head and with a figure with raised arms above a separate picture of a seated figure looking towards a Maltese cross placed within two rings.

Taken from the Church of St. Lawrence, Chevening Road, Brondesbury, north London, when that Church was demolished in 1971.
The window was commissioned in memory of Rifleman Harry Davenport Seymour of the King's Rifle Corps who died aged 19 on 29 July 1918.

Leonard Walker (1877-1964) studied at the St. John's Wood Art School, of which he was later to become Principal and began to produce stained glass in the 1890s. Working within the principles of the Arts & Crafts movement, his glass is characterised by bold designs and a limited use of paint, relying instead on the lines of the leads to create the main outlines. The glass used is particularly uneven in texture and colour, giving a richly patterned effect.

Leonard Walker employed slab glass extensively in his works. Slab glass is made by blowing semi-molten glass into a rectangular bottle mould. Its uneven thickness gives a lustrous effect and many subtle colour variations. Walker relied heavily on these qualities in the glass in the execution of his designs.

In the first half of the nineteenth century, numerous experiments were conducted in an attempt to recreate the medieval methods of making stained glass. Medieval glass is coloured while still in its liquid form with mineral oxides. It is then blown to shape by mouth before being fired in the kiln. Details are added on after this with a copper or iron oxide based pigment and then fired again in the kiln at a lower temperature to fuse the pigment to the glass. From the beginning of the 14th century the glass could have an additional paint layer composed of a silver compound. When fired this turns a lemony yellow to a burnt orange in colour.

Contemporaries noted that the making of his glass was a process of infinite experiment in the variations of thickness and tone and of the distribution of simple tints throughout the composition.

Walker was a member of the Royal Institute of Painters in Watercolours. He won prizes for the stained glass he exhibited in Paris in the 1920s.
Some of his other commissions include:
600 square feet of glass for the Hong Kong and Shanghai Bank, Singapore
three large windows in memory of Henry Hudson, the Navigator, in St. Ethelburga’s, Bishopgate
window depicting King Henry VI for the Leatherseller’s Co., St. Helen’s Place, Bishopgate
Crucifixion window, St. Martin’s, Ongar, Essex

Panel of tinted and coloured antique and Norman slab glass with painted details. Depicting a male figure. Made by Leonard Walker, England, c.1918.

This window is a memorial to a young man who died in the First World War. It is possible that Walker borrowed the imagery of the Resurrected Christ to indicate the departed’s soul rising to heaven.
As with the accompanying panel of a female saint, the precise subject is unknown.

England, about 1918, by Leonard Walker (1877-1964)
Memorial to Seymour in the Baptistery of St. Lawrence Church, Brondesbury, London 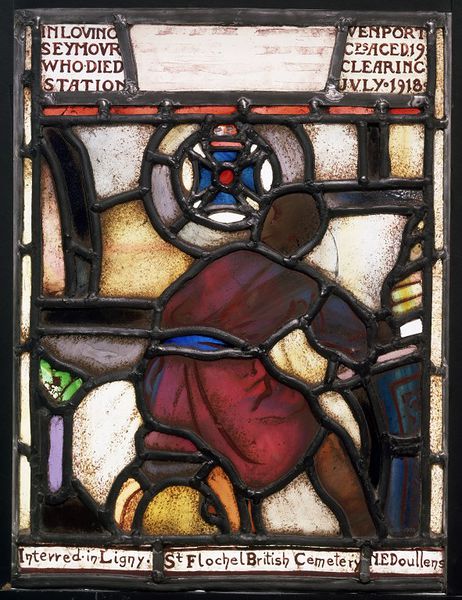