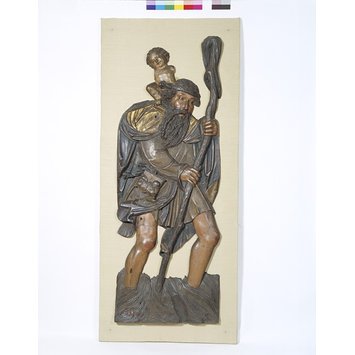 This is a relief made in Tyrol in about 1480-1500. The relief, in painted and gilded limewood, represents St. Christopher. This relief almost certainly formed part of a wing of an altarpiece and the stylistic features point generally to an origin in the Tyrol. Although pinewood was used commonly for sculpture in the Tyrol, several Tyrolese pieces in limewood of around the same date also survive.

The saint is carrying the naked Christ Child on his right shoulder and wades through the water. He holds a staff in the form of a branch in both hands, and is clad in a knee-length tunic under a belted cloak from which a purse is suspended. His hair is held by a twisted headband. The Christ Child's lost left hand was probably raised in blessing, while the missing right would have held an orb.
The relief is made of one piece of wood except for two rectangular insertions in the saint's left knee, and above his right knee. Some patches of canvas are glued to the back, and several holes have been drilled into the relief, presumably fixing devices. The arms and two toes of the right foot of the Christ Child are missing. A rectangular and a triangular piece at the right side of the base are missing. The Christ Child's face and body have retained their natural flesh colours, as have St Christopher's face, hands and legs, the latter with blue veins. Christ's hair is gilded; the saint's hair and beard are brown with gilded highlights. St Christopher's blue-lined short coat was originally gilded under a green glaze with silvered pressed brocade patterns under a green glaze; the short tunic was also silvered under a green glaze, as was the headband with a red glaze, all now discoloured. The purse and the staff are painted brown; the knife was originally gilded under a dark brown glaze. The base depicting the river is pale green.

At the time of acquisition the relief, which almost certainly formed part of a wing of an altarpiece, was considered to be in the style of the Nuremberg sculptor Adam Kraft (1455/60-1508/9). Wilhelm von Bode classified it as South German, about 1510 (Departmental records).
Provenance: Said to have come from a church in the Tyrol. Bought at Christie's, London, 7 December 1872, lot 128 for £1 18s.

The composition is loosely based on Martin Schongauer's engraving of the same subject (Bartsch 1980, p. 257, no. 48), while the stylistic features point generally to an origin in the Tyrol; it is comparable for example to the relief figure of the same saint in the corpus of an altarpiece from the convent of Sonnenberg near Bruneck/Brunico by Simon and Veit von Taisten of about 1490/95, now in the Germanisches Nationalmuseum, Nuremberg. The relief of St Christopher on the left wing of the altarpiece in the church of St Leonard in Laatsch by Hans von Schnatterpeck of about 1490 (Egg 1985, figs. 142 and 221), and the Tyrolese relief of the same saint, formerly in the collection of Richard von Kaufmann, (present location unknown; Goldschmidt 1917, lot 314) are also comparable. The type of wood of the above-mentioned pieces is pine, common for sculpture in the Tyrol, while the present relief is of limewood. This does not however preclude an origin in the Tyrol; several Tyrolese pieces in limewood of around the same date survive (Müller 1976, pp. 441-3, nos. 166, 167, 173, 182). 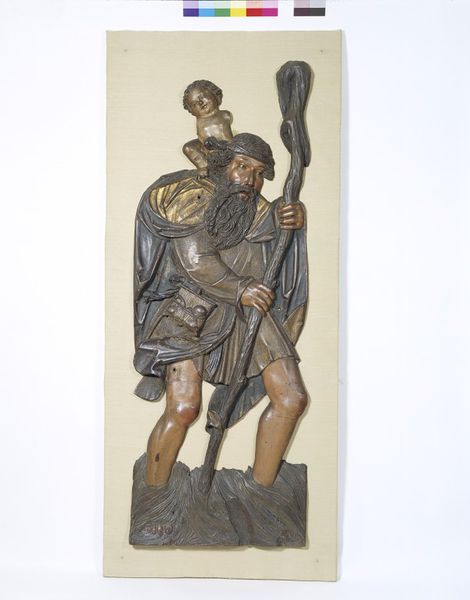