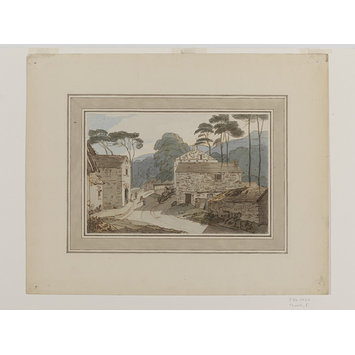 Part of Ambleside at the Head of Lake Windermere

Francis Towne (1739-1816) began his artistic career as a coach painter. He later moved on to landscape painting. His watercolours are very simple but striking. He painted this one in the English Lake District, a popular destination for artists and tourists. The number eleven inscribed on the back indicates that it was part of a series.

Watercolour depicting part of Ambleside at the head of Lake Windermere.

Given by Mrs Fanny and Jane Elizabeth Douglas, 1924.

Francis Towne was borne in Isleworth, Midlesex. He was apprenticed to the London coach painter Thomas Brookshead on the 5th August 1752. He began painting in oils at the age of fourteen, probably whilst attending the academy of William Shipley. Fellow pupils at Shipley’s academy were Richard Cosway (1742-1821) and William Pars (1742-1782). By the mid 1760s he had set up as drawing master in Exeter, where he taught the local gentry and became established as a painter of landscapes and country houses. Considered a cultural backwater by his contemporaries, Towne chose to settle in Exeter as he felt that it offered the landscape painter an opportunity ‘to see nature sometime in the year’ (Stephens, 1996, p.502). In 1777 he toured wales with his patron, the lawyer James White (1744-1825). In 1780 he travelled to Rome via Geneva and in 1786 he made a tour of the Lake District, again accompanied by James White, in 1786.

He applied eight times, unsuccessfully for associateship of the Royal Academy. He began exhibiting at the Society of Artists in 1762. He also exhibited at the British Institute. In 1805 he held a one-man exhibition at the Gallery at 20 Lower Brook Street, Grosvenor Square. This showcased over 190 watercolours painted out of doors during his tours of Britain and the Continent. He charged 25 guineas for an oil picture and between 8 and 10 guineas for a watercolour. Towne found it difficult to become established as an artist in London and many of his patrons were Devonians.

This watercolour was made during Towne's visit to the Lake District in 1786. An area of outstanding natural beauty that embodied contemporary ideals of the picturesque, the Lake District had become a popular destination for tourists. It was popularised by writings on the picturesque by authors such as the Rev. William Gilpin in his Observations Relative Chiefly to Picturesque Beauty Made in the Year 1772, on Several Parts of England, Particularly the Mountains and Lakes of Cumberland and Westmoreland, published the same year as Francis Towne's visit to the area.

The composition, with buildings on the right cropped and the lane leading to no particular spot differs from contemporary ideals of the picturesque promoted by authors such as Gilpin. The abstraction of palette, where broad washes of greens, blues, browns and greys are applied to outlines in pen and ink shows the artists moving away from contemporary ideals to a more abstract way of recording the view. Wilton has observed that this is possibly in response to the blotter drawings made by Alexander Cozens of landscapes (Wilton, 1993, p0.37-8). This desire for simplification of form and colour consistently occurs in Townes work (for example watercolour – Ambleside, or Lake Windermere from Ambleside, Birmingham City Art Gallery, inventory number 1921P60; Rydal Water, V&A, inventory number: P.19-1921).

During this tour Towne produced about 40 views in watercolour. He habitually recorded the location and time of day of execution of the view. P.24-1924 is inscribed on the back:

'No. 11 morning light from the right hand 8 O Clock. Part of ambleside at the head of the Lake of Windermere drawn by Francis Towne august 7th 1786.'

This, along with numbering the works, reflects the contemporary interest in using watercolour to record particular. By giving the time of day, Towne demonstrates his interest in the effects of light at particular times of the day, which falling from the right in this composition casts strong shadows on the street. It also responds to a growing interest in 'painting on the spot.' However in spite of the preference for painting on the spot it is likely that, like many artists, Towne actually worked this watercolour up from the pen and ink sketch at a later stage in his studio. Although he exhibited predominately in oil, Towne also sold finished watercolours from his tours of Britain and the Continent. These were promoted in 1805 through his one man show in London, where he exhibited solely watercolours.

Watercolour depicting part of Ambleside at the head of Lake Windermere by Francis Towne. Great Britain, 1786.

Victoria and Albert Museum, Department of Engraving, Illustration and Design & Department of Paintings, Accessions 1924, published under the Authority of the Board of Education, London, 1926. 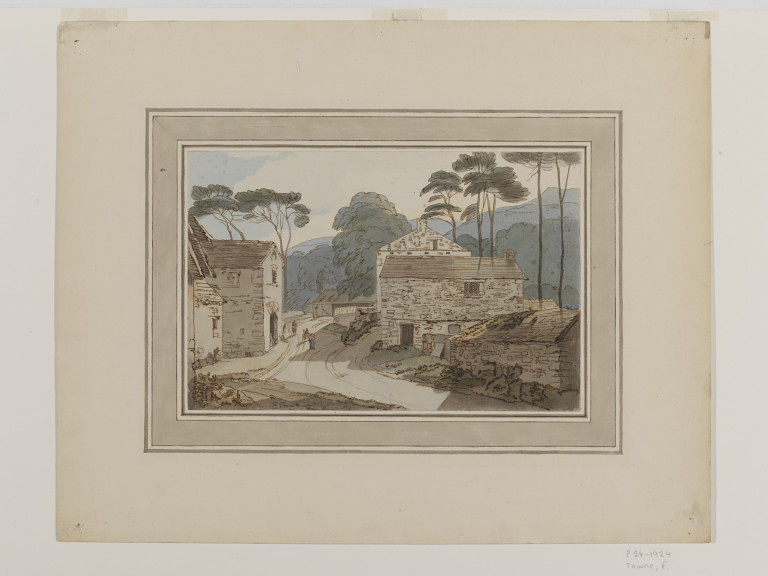