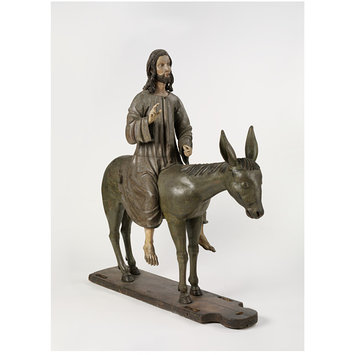 Christ on an ass

This popular type of sculpture, known as a ‘Palmesel’ or ‘Palm Donkey’, represented Christ during religious services around Easter. On Palm Sunday, it was drawn through the streets to commemorate his triumphal entry into Jerusalem.

The bearded figure of Christ with shoulder-length wavy hair is seated astride the unsaddled ass. His right hand is raised in blessing while his left originally held the reins. The glazed rectangular base has four slots for wheels and the semicircular-shaped forepart with a hole for towing.
The object is made in three main sections: the upper part of Christ's body (limewood); the lower part of his body and the ass (also limewood); and the base (pine). A circular hole (diam. 2 cm) for a fixing device is drilled on top of Christ's head. The hands and feet of Christ, and the legs, ears and tail of the animal are inserted. Both arms of Christ are carved separately and have been attached at the shoulders. The upper part of the body of Christ and the belly of the ass are hollowed out. The hooves are dowelled onto the base. The top finger-joint of the third finger of Christ's right hand, the wheels of the base, and the reins are missing. The robe of Christ and body of the ass show greenish grey overpaint, which on the mane and the tail is of a darker tone. The gilding of the border of Christ's robe is visible. Christ's head, hands and feet retain much of their original polychromy.

Limewood and pine, painted and gilded

At the time of acquisition the Palmesel - the German term for a sculpture of the Blesssing Christ riding on an ass - was classified as "German; sixteenth century"(Departmental records). Baxandall (1974, p. 34, no. 5; 1980, pp. 58-59, fig.32) suggested that the figure was made by a Swabian sculptor, reflecting the tradition in Ulm, in particular the Palmesel made for the church of SS. Ulrich and Afra in Augsburg in 1456, now in the Dominican convent in Wettenhausen. According to an Augsburg record of about 1500-12 this was "carved by a master in Ulm" (Tripps 1969, p. 250). Tripps (ibid., p. 67; and 1993, p. 82, no. 22) ascribed convincingly this figure to Hans Multscher, although the head of Christ was re-carved in the eighteenth century. Baxandall (1974, p. 34) also suggested that two further Palmesel figures, one dated 1464, in the Ulm Museum, and another in the Skulpturensammlung in Berlin of about 1470-80 (Demmler 1930, p.204, no. 8144), were Swabian examples modelled on the piece in Wettenhausen, but stated that the present piece "is substantially later than these and, though the head keeps close to Multscher's pattern, the soft curvilinear modelling of the lower drapery and the crisp carving of the ass's mane suggest a a south Swabian sculptor well into the first quarter of the sixteenth century". However, the stylistic features and facture of
A.1030-1910 do not differ markedly from the examples in Ulm, Berlin, and another piece in the Württembergisches Landesmuseum in Stuttgart (Baum 1917, p. 179, no. 167), and a date of around 1470-90 seems more likely.

Sculptures of the Palmesel and the Resurrected Christ acted as physical manifestations of Christ's presence in the Easter liturgy. The Palmesel formed an integral part of the Palm Sunday procession when it was drawn through the streets, while the figure of the Resurrected Christ was winched up to the vault on Easter Sunday. The procession on Palm Sunday was based on the episode of the Entry into Jerusalem as recounted in the Gospel of Matthew (XXI, 5-10). The origin of sculpted images being used for these processions are in the tenth century, although the Palm Sunday processions can be traced back as far as the fourth century, where in Jerusalem the Bishop as representative of Christ led the procession. This tradition continued during the Middle Ages in France, England and most of Italy , but also in Cologne were the Bishop rode on a horse on Palm Sunday to the church of St Pantaleon (Tripps1996, p. 90). The Life of St Ulrich of Augsburg, written between 982 and 992, recorded the first "effigie sedentis Domini super asinum" (an image of the Lord sitting upon an ass), carried in procession from the church of SS Ulrich and Afra to the Cathedral. Adelmann (1966, pp. 182-200) identified about 270 locations of processions with a Palmesel from the fourteenth century; eight examples of these survive. He lists about sixty surviving figures from the fifteenth and early sixteenth centuries in the German speaking lands. Tripps (1996, p. 111) pointed out that in later centuries these images did not only appear on Palm Sunday but were displayed throughout the year in the church, often in chapels specially provided for them. 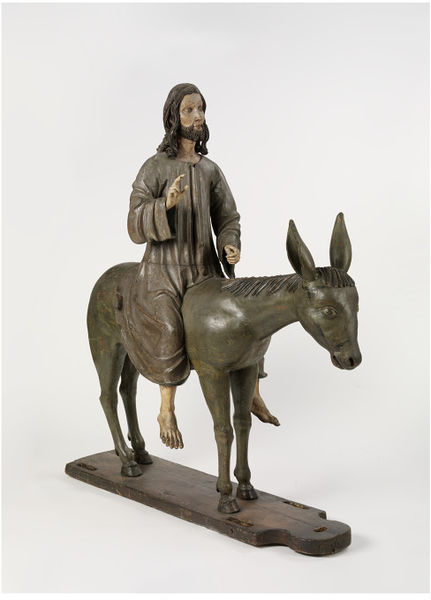