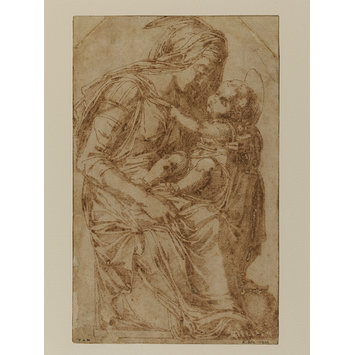 Drawing of the Virgin and Child

The drawing is a copy after a bas-relief which exists in several versions, notably in the marble in the V&A Museum (no. A.841927); described and illustrated by Maclagan and Longhurst, loc. cit., and by Pope-Hennessy and Lightbown. Another version of the relief (illustrated in most of the works quoted above) was formerly in the Dreyfus Collection in Paris and is now in a private American collection. The relief is usually attributed to Desiderio da Settignano, though Woelffiin maintained that the Dreyfus version was a copy of a later work, dating from about 1500, and de Liphart suggested it was by Francesco Ferrucci. The finer version of the relief in our Museum was hardly known until it was acquired by the Museum in 1927.

The traditional attribution of the drawing was to Donatello. Bode was the first to point out its connection with the Dreyfus relief. Observing an affinity between the relief and Michelangelo’s Madonna della Scala in the casa Buonarroti, he suggested that Michelangelo had made the drawing as a record and afterwards used it as a model in the composition of his marble relief. This opinion was upheld by Strzygowski and Thode and, as late as 1925, by de Liphart.

In reality, apart from a superficial resemblance in the method of hatching, the drawing reveals none of Michelangelo’s qualities as a draftsman, and Woelfflin was nearer the truth in attributing it to the school of Baccio Bandinelli. In support of this opinion he published (loc. cit., p. 110) a drawing by Bandinelli of the Holy Family in the Uffizi (no. 1527), in which the Virgin and Child bear some resemblance with the group in our drawing, and were doubtless inspired by the same bas-relief. A drawing on the Louvre attributed to Bandinelli and published by E. de Liphart in Beaux-Arts, 2, 1924, p. 278, bears a still closer resemblance to our darwing, being likewise a copy after one of the evrisons of the relief, with the addition of some attaendants angels. The method of hatching suggests Bandinelli. But in other respects, this drawing, like ours, is below Bandinelli’s usual standard. Another drawing in the Museum, later in date and poorer in quality, is based on the same composition. (See no. 513 below). A drawing in the Uffizi attributed to Scedone shows yet another variant of the same theme, this time copied from a marble relieft in the Kaiser Friedrichsmuseum, Berlin. Both the drawing and the relief are illustrated by Giusta Nicco Fassola in ‘Bassorilievi donatelleschi nel museo Calvet’ in Critica d’Arte, 3, 1956, figs. 291 and 293.
Victoria and Albert Museum, Department of Engraving, Illustration and Design and Department of Paintings, Accessions 1936, London: Board of Education, 1937. 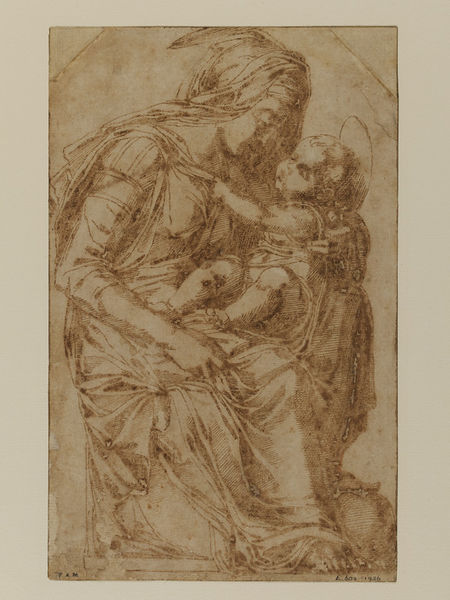