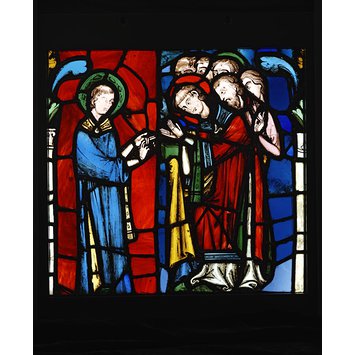 Scenes from the life of Saint Stephen

This panel is actually made up of two different ones that have been joined together. At the time that the Victoria and Albert Museum acquired them, in 1924, it was believed that the same saint was depicted in each panel. But it was not known who he was.

The saint is dressed as a deacon of the church, so some thought that he might be St Lawrence. More recently, he has been identified as St Stephen. This is because the image on the right is similar to that in another panel in the V&A (Museum number: C.20-1980), which came from a window in Coutances Cathedral in Normandy that showed scenes from the life of St Stephen.

Stephen was one of the first deacons of the Christian church. The New Testament book of Acts describes him as a popular preacher. However, the Sanhedrin, the supreme Jewish council, accused him of blasphemy and put him to death by stoning.

In medieval art, moving hands indicate the act of talking. In the scene on the left we see St Stephen preaching. This scene could refer to his preaching in general, or when he was brought before the Sanhedrin.

In the right-hand scene we see St Stephen among a group of people. He is talking or debating with someone on the left, who is indicated only by hands covered with a yellow veil carrying a green book. This is probably the Jewish high priest, in the act of condemning Stephen. Oddly, one of the group of people behind Stephen wears a halo. We know from Acts that Saul was among those who witnessed against Stephen and consented to his death. Saul was subsequently converted to Christianity, when he became known as Paul. He was one of the most important thinkers in the early church.

Stephen was the first to die for the Christian faith and is known as the ‘protomartyr’.

Panel depicting the preaching of a sainted deacon and his ordination. Background largely restored.
Scenes from the life of Saint Stephen - St Stephen in debate on the left, probably with the Jews who challenged him in argument (Acts 6:9-10). On the right Stephen surrounded by the false witnesses and explaining himself before the High Priest (Acts 6:12-57)

These two panels come from separate windows. Their orgin is unknown but the style of painting of the heads would indicate a workshop in the Ile-de-France or Champagne regions.

The two saints are dressed as deacons in an alb and dalmatic. The saint on the right has a maniple over his arm. He is bending his knee and his hands are stretched out ready to receive a book from someone. All that is visible is the book carried by covered hands. This is the act of ordination for a deacon where he receives a copy of the Gospels.

J.A. Knowles believes both saints to be St. Lawrence. Others believe it to be St. Stephen with the scene on the left being St. Stephen in Debate (Acts 6: 9-10) and on the right St. Stpehen surrounded by false witnesses and before the high priest (who is the one carrying the book) (Acts 6: 12-57).

This panel is actually two different ones that have been joined together. When they were acquired by the museum in 1924 it was believed that the saint depicted in each panel was the same one but who it was was not known.

The saint is dressed as a deacon of the church and one possibility was that it depicted the deacon St. Lawrence. More recently the saint has been identified as St. Stephen based on the similarity between the image on the right and that in another panel in the museum’s collection (museum no. C.20-1980). This latter panel was known to have come from a window in Coutances cathedral which showed scenes from the life of St. Stephen.

Stephen was one of the first deacons of the emerging Christian faith shortly after the crucifixion of Jesus Christ. He is reported in the Book of Acts in the New Testament and is described as a popular preacher. However, his teachings were misinterpreted by the Sanhedrin, the supreme Jewish council, and they accused him of blasphemy. This was a charge punishable by death. Stephen was brought before the Sanhedrin to answer these charges and was put to death by stoning.

In the scene on the left we see St. Stephen preaching. In Medieval art, the act of talking is depicted by moving hands. This scene could refer to his preaching in general or when he was brought before the Sanhedrin.

In the right hand scene St. Stephen is seen amongst a group of people and he is talking or debating with someone who is indicated only by a green book carried by hands covered with a yellow veil on the left. This was probably the Jewish high priest and he is in the act of condemning Stephen.

A curiousity in this scene is that one of the group of people behind Stephen wears a halo. In the Book of Acts it is clear that one of the witnesses against Stephen was Saul who consented to his death. This is the Saul who was a persecutor of the Christians until his conversion on the road to Damascus. From that point he became known as ‘Paul’, St. Paul, one of the most important figures in the early development of Christian thought.

Stephen was the first to die for the Christian faith and is known as the ‘protomartyr’. His feast day is December 26, now referred to as ‘Boxing Day’ in England.

The site of his martyrdom was not recorded but in the 5th century the Eastern Empress Eudoxia built a church on the site where oral tradition claimed it occured. This was outside the ‘Damascus Gate’ in Jerusalem.

His relics were later taken to Constantinople and then to Rome where they are interred with the bones of St. Laurence in the church of San Lorenzo fuori le Mura, still a pilgrimage site.

The stories related to St. Stephen’s life that are usually depicted in Medieval art are those of his Ordination, his Preaching and his Stoning.

He is often depicted with his attribute of the stones, the instruments of his martyrdom. 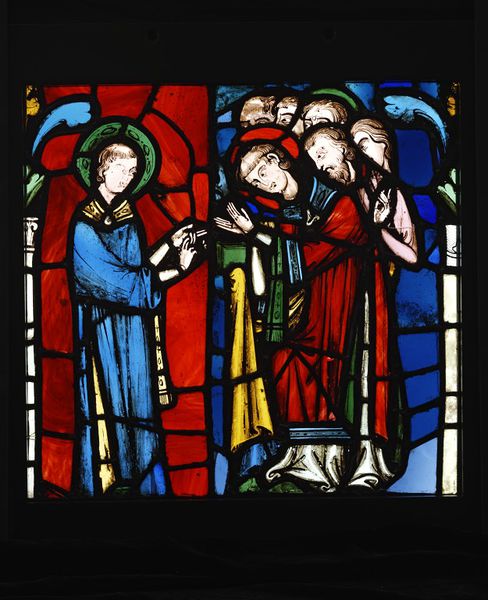