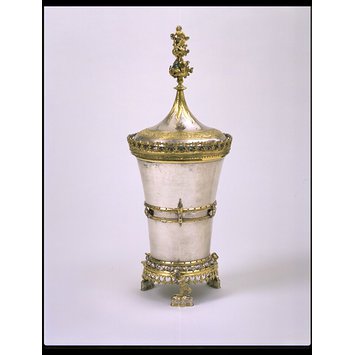 This beaker and cover used to belong to the Treasury of Basel Cathedral in Switzerland. Inventory records from the cathedral reveal that it was given to the Cathedral Treasury by a chaplain called Eucharius Vol between 1477 and 1511. After entering this ecclesiastical context, the beaker was transformed from a domestic vessel into a reliquary.

One of the most striking features of this object is the presence of the four wild men. In the later medieval period Wild Men were popular decorative motifs and could be found across a wide range of artistic media. On the beaker a Wild Man crowns the finial and three Wild Men act as the beaker’s feet. Crouched on pedestals, the Wild Men hold clubs as if to defend the precious object. Their distinctive long, shaggy hair covers their entire bodies and is belted at the waist to demonstrate that the hair serves as the Wild Men’s clothes. This hair is gilded so that a visual contrast is created with the silver used for their skin. Using Wild Men as the feet for beakers was a popular device in the later medieval period, and other examples of this practice can be found in The Metropolitan Museum of Art in New York.

Cylindrical beaker and cover made of silver. The main body of the beaker is of silver, but the mounts, horizontal decorative bands, and finial are gilded. The cover is surrounded with a gilded band of fleur-de-lis and quatrefoil arcading and is surmounted by a decorative finial. The finial is made up of scrolling foliage and flowers, and contains translucent enamel amongst the foliage. The finial is topped with a figure of a Wild Man. Three similar Wild Men, crouching on pedestals, can be found acting as the feet for the beaker.

This beaker and cover is from the Treasury at Basel Cathedral, whose contents were dispersed in 1827, after a dispute between the cathedral and the canton. Inventories reveal that it was given by a chaplain, Eucharius Vol (died. 1502), between 1477 and 1511, when it first appears in the inventory. It was sold at auction in 1836 at Liestal, when it was purchased by the Basel goldsmith Johann Friedrich II. It was later sold to the Soltykoff Collection in Paris, from where it was purchased by the V&A for £122.

Historical significance: This is one of the finest surviving examples of a secular Gothic vessel from an ecclesiastical Treasury. Its provenance from the Cathedral Treasury at Basel is attested through inventory records which show the object being given by one of its chaplains, Eucharius Vol. The beaker was given a religious purpose through its transformation into a reliquary. This new function was achieved by ensuring that the lid was fastened securely to the beaker.

The motif of the Wild Man, which this beaker employs for the feet and the finial, was popular during the medieval period, and was associated with power and fertility. For the feet, the Wild Men are depicted as crouching on pedestals and holding a club in their hand. Their characteristic long, shaggy hair that completely covers their bodies in place of clothes is belted at the waist and gilded in order to contrast visually with the silver used for their skin. It is possible that the motif of the Wild Man was selected for highly decorative beakers such as this because of their ability to defend. The appearance of a weapon in the form of a club stresses the protective role that the Wild Man could play.

Beakers such as this were secular objects. Often described as a drinking vessel, it is unlikely that this example served a practical function due to its elaborate decoration including translucent enamel and the abundant use of gilding. It is more probable that its primary role was to be displayed in order to demonstrate the magnificence, taste, and wealth of its owner. 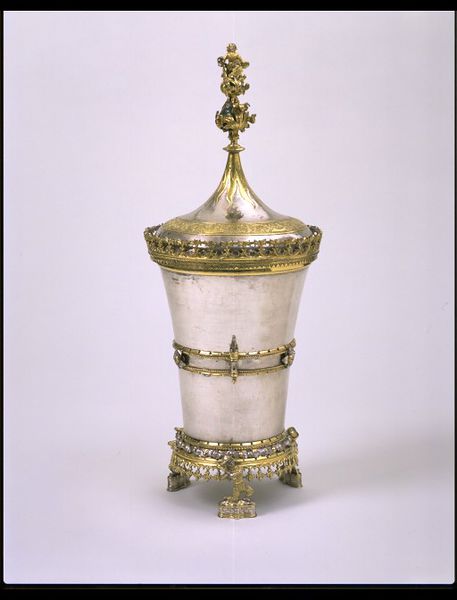