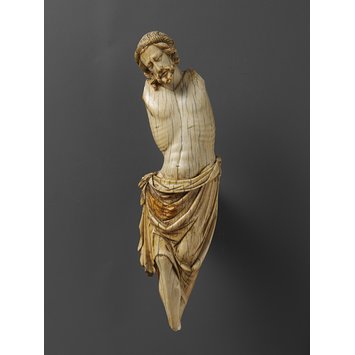 This is an ivory figure of the Crucified Christ, made in France (Paris) or England, in ca. 1275-1300. This in one of the finest surviving ivory carvings of the crucified Christ from the Gothic era, despite its fragmentary state. The understanding of the skin and musculature of the torso is of the first order, the rib cage shown pressing through the tightly drawn flesh of Christ's flesh and his belly prodtruding gently above the waist band of the loincloth. The head is also a masterpiece of acute observation, a depiction of pain nobly borne. Although the high quality of the sculpture is undeniable, it has not been possible to establish beyond doubt where it was made.
Both public and private devotional art encouraged people to empathise with Christ’s suffering by re-living the events of the Crucifixion. Originally this figure would have been attached to a larger cross.

Christ is shown at the moment close to death, his eyes closed and his head slumped to one side. He wears a rush or wicker wreath rather than the crown of thorns. The carving of the skin and musculatur of the torso are masterly, the rib cage shown shown pressing through the tightly drawn flesh of Christ's chest. The sculpture is carved in the round, although flattened at the back in the manner of an apliqué figure and was attached to a narrow cross by means of a large dowel that would have been inserted into the circular holebehind Christ's right hip. The drapery folds of the loincloth have been damaged and recarved, and microscopic traces of discoloured discoloured remain both here and in the beard. The latter were originally gilded, the lips of Christ were red, and the underside of the loincloth was blue. The main surface of the of the loincloth has been stained brown, presumably by the painting medium used in the lost coloured decoration, and there is a ghost of a border running along the lower edge of the cloth.

Formerly in the collection of Thomas Gambier-Parry (d.1888), Highnam Court, Gloucestershire (acquired by him before 1875 - number 8 of the unpublished catalogue of the collection prepared by W. Chaffers, held at the Courtauld Institute of Art, London).
Purchased by the museum in 1921 (£275).

Historical significance: Although a considerable number of ivory crucifix figures are mentioned in inventories, and the 'tailleurs de Cruchefiz' were an important body in their guild, examples of fine quality carving of the 13th and 14th centuries are very rare.

The figure is from a large altar cross or retable, it is a rare example of a Gothic ivory crucifix figure. 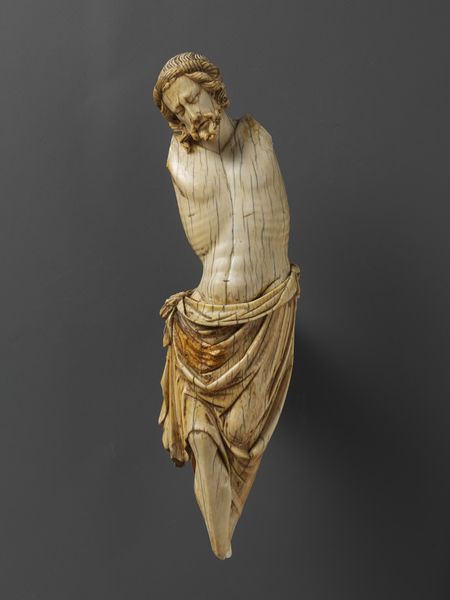