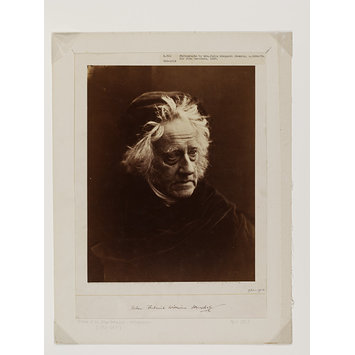 In March 1868 Cameron used two rooms at the South Kensington Museum as a portrait studio. Her letter of thanks makes clear her commercial aspirations, mentioning photographs she had sold and asking for help securing more sitters, including, she wrote hopefully, any ‘Royal sitters you may obtain for me’.

A photograph of an elderly man (Sir John Herschel) from the shoulders up, wearing a cap.

'From life at his own residence Collingwood April 1867'
on mount, lower left under image; inscribed; brown ink

Given by Alan S. Cole, 1913
V&A: 930-1913 [28 November 2015 - 21 February 2016]
Julia Margaret Cameron experimented boldly with focus and scale, flaunting the conventions of conventional studio portraiture to create the dramatic, close-up portraits for which she is best known. Here she depicts her mentor, the astronomer J. F. W. Herschel, who probably introduced her to photography. Herschel made major contributions to photographic science. He invented 'hypo', the chemical that fixes photographs, and coined the terms 'positive', 'negative' and even the word 'photography' itself. [19/08/2004] 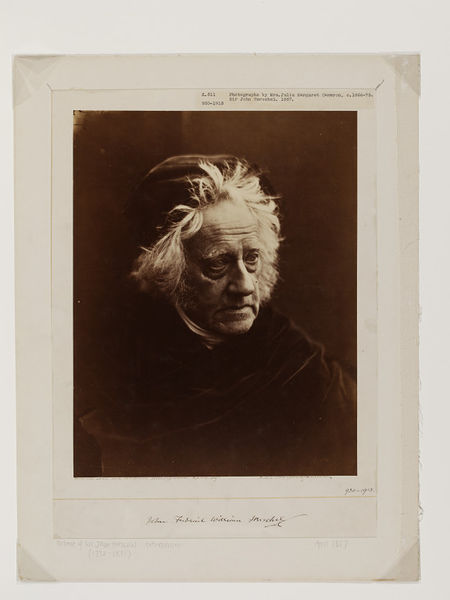