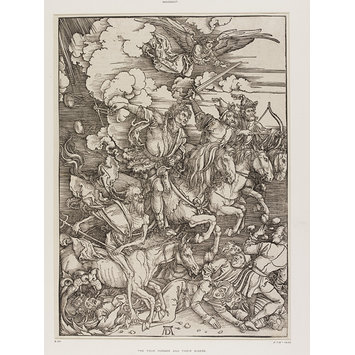 Opening of the Four Seals

This woodcut comes from a series of fifteen by Albrecht Dürer illustrating the Apocalypse of Saint John and published in 1498. The four riders illustrate the opening of the first four seals, signalling the end of humankind by Conquest, Discord, Famine and Death. Dürer has added dramatic energy to traditionally static representations of the opening of the first four seals, which are usually shown separately.

Here, the blockcutter’s extraordinary skill has produced an illusion of depth using line alone. Horizontal parallel lines create a dramatic dark backdrop against which the foreground figures stand out. The energy of the scene comes from the delicate curling lines defining much of the detail in the foreground figures and clouds.

It was usual for artists like Dürer to employ specialist blockcutters to cut blocks to their designs. Dürer would have drawn the image onto the block for the blockcutters to follow. These woodcuts outstrip the quality of other woodcuts of the time, leading to suggestions that Dürer may have cut the blocks himself but Dürer's training as a goldsmith and painter would have taught him engraving and design skills, not woodcutting. As he published the book himself, he is likely to have supervised the cutting, ensuring that they were close to his intentions.

This page is from a book version published in 1498 in German. Dürer controlled all aspects of publication, borrowing the font for the text from his godfather, publisher Anton Koberger. He also issued a Latin edition for the international market. A reissue in 1511 was set to Latin verses with two other large woodcut series, the Life of the Virgin and the Large Passion. The images were also sold separately without text.

The Four Horsemen of the Apocalypse attacking a group of people. Their weapons are a trident, a bow and arrow, a sword and a sling. Above is an angel in a cloudy sky. Bolts shoot from the sky from top left. In the bottom left corner are the jaws of Hell, represented by a monster's mouth.

This image comes from the German edition of 1498. There was also a Latin edition and single-sheet woodcuts were also issued. The set was reissued in 1511 along with the Large Passion and Life of the Virgin series, with Latin verse.

For the 1498 edition the font was borrowed from his godfather an important Nuremberg publisher Anton Koberger.

'The Four Horsemen of the Apocalypse' or 'Opening of the Four Seals', woodcut by Albrecht Dürer (1471-1528); number five of sixteen illustrations to the 1498 German edition of the 'Apocalypse of Saint John'; Nuremberg, Germany, 1498.

According to Bartsch impression a of 1498 edition 'before the crack leading to the shin of Death and before the two gaps in the legs. No WM (watermark)' 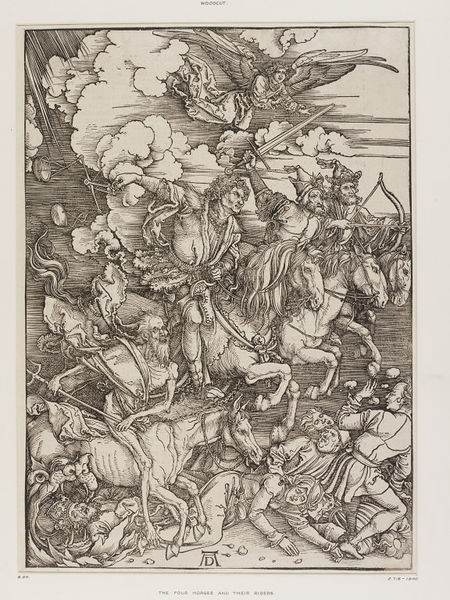