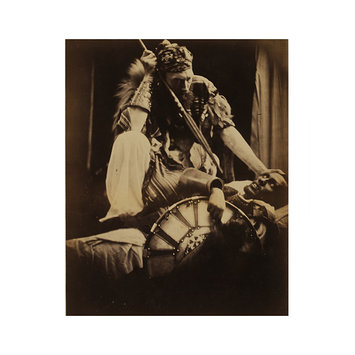 When Julia Margaret Cameron photographed her intellectual heroes such as Alfred Tennyson, Sir John Herschel and Henry Taylor, her aim was to record ‘the greatness of the inner as well as the features of the outer man.’ Another motive was to earn money from prints of the photographs, since her family’s finances were precarious. Within her first year as a photographer she began exhibiting and selling through the London gallery Colnaghi’s. She used autographs to increase the value of some portraits.

With this photograph, Cameron was probably hoping to capitalise on public interest in the Abyssinian Expedition, a conflict in what is now Ethiopia. Captain Speedy, the man with the spear, was a British army officer and guardian of young Prince Dèjatch Aláyamou, whose attendant is seen here. A newspaper advertisement promoted the picture as including ‘Abyssinian trophies’.

Below image, on left handwritten: 'From life Registered Photograph', on right: 'Julia Margaret Cameron'. Beneath that, in pencil, 'Spear or Spare' and, below that, 'Báshá Félíka / Captn. Speedy'.
possibly includes signature by Captain Speedy

Public interest in the 1868 Abyssinian (Ethiopian) expedition by British forces extended to individuals associated with the conflict on both sides. In particular, the figures of the orphaned Abyssinian prince Alámayou and his striking guardian, the six foot five, flame-haired and bearded Captain Tristram Charles Sawyer Speedy, caught the public imagination.

A number of objects formerly in the collection of Captain Speedy were donated to the V&A by his goddaughter Mrs Ida S. Perrin (who also donated this photograph) in 1936 and are now in the Metalwork collection (M.440-1936 to M.445-1936).

With this photograph, Cameron was probably hoping to capitalise on public interest in the Abyssinian Expedition, a conflict in what is now Ethiopia. Captain Speedy, the man with the spear, was a British army officer and guardian of young Prince Dèjatch Alámayou, whose attendant is seen here. A newspaper advertisement promoted the picture as including ‘Abyssinian trophies’. 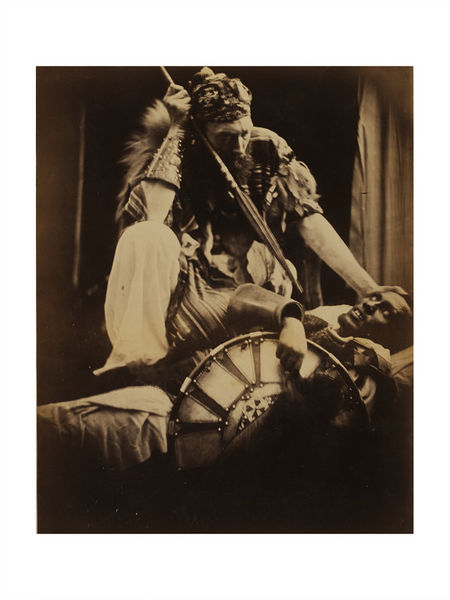