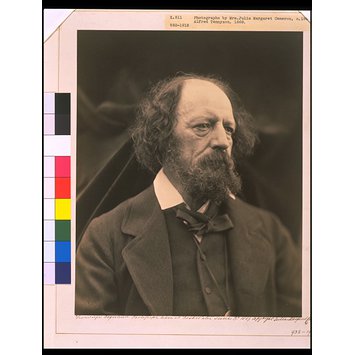 In March 1868, Cameron used two rooms at the South Kensington Museum as a portrait studio. Her letter of thanks makes clear her commercial aspirations, mentioning photographs she had sold and asking for help securing more, possibly royal, sitters.

This was the last of many portraits Cameron made of Tennyson. She posed him in contemporary dress instead of the more timeless draperies she used in other photographs. She sent this print to Henry Cole as a gift, describing it as ‘a National Treasure of immense value, quite the most faithful & most noble Portrait of him existing’.

A photograph of a bearded man (Alfred Tennyson)

This was the last of many portraits Cameron made of Tennyson. She posed him in contemporary dress instead of the more timeless draperies she used in other photographs. She sent this print to Henry Cole as a gift, describing it as ‘a National Treasure of immense value, quite the most faithful & most noble Portrait of him existing’.

Julia Margaret Cameron (1815-79)
‘A. Tennyson’
1869
Alfred, Lord Tennyson, the Poet Laureate, was a
major source of inspiration for Cameron, who was his
neighbour in Freshwater on the Isle of Wight. The last
of at least 19 portraits Cameron made of him, this is a
quiet yet noble likeness. The focus is sharpest around
the poet’s nose and eyes, suggesting his visionary,
‘seeing’ gaze. 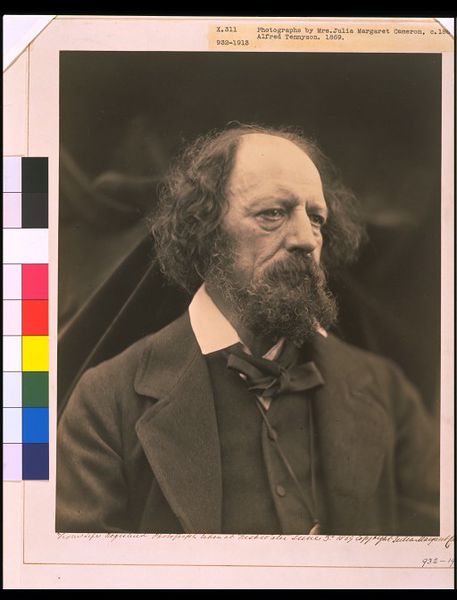